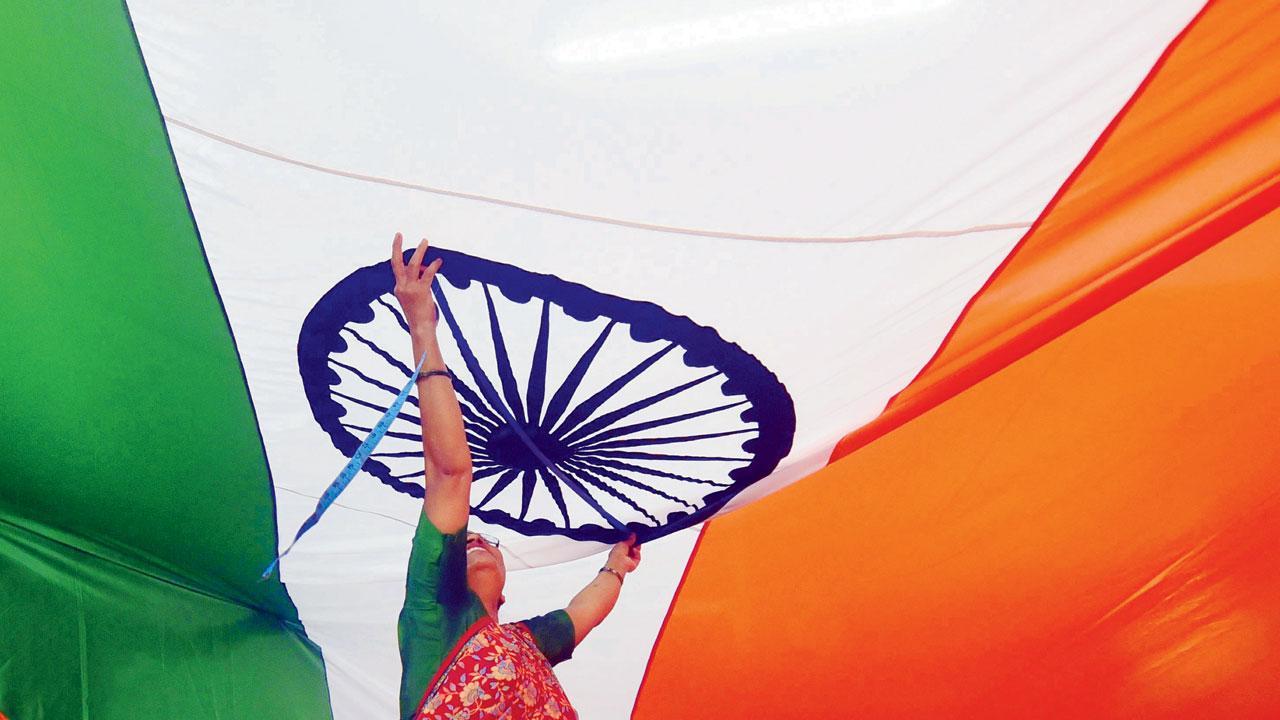 Police personnel have been told to hoist national flags at police station premises as well as their own residences and residential buildings. Representation pic


The Mumbai police have been roped in for publicity of the Central government’s Har Ghar Tiranga campaign. Apart from hoisting the tricolour outside their offices and residences, they have been asked to help advertise the campaign by distributing pamphlets, flags and even conduct street plays, as per an internal circular of the department to mark 75th Year of Independence Day of India or Azadi Ka Amrit Mahotsav. Police officers said that the state government, too, has issued a notification in this regard.

Mumbai police spokesperson DCP Balsing Rajput said, “The Central and state governments have given instructions in this regard and issued a government resolution. We are acting accordingly.”

As per the circular, all police personnel are to hoist the national flag at their residence and residential buildings, and also encourage others to do the same. Apart from this, pamphlets are to be kept at checking points to be distributed to citizens. Banners and standees are to be installed at police stations to raise awareness of the campaign while cops will distribute flags in police colonies.

Cops are to get the flags for the same from the Collector and civic body, and in case the demand is more than that, private donors can also be roped in at a local level. The circular further instructed police personnel to maintain a record of the flags they acquired and distributed as well as take photographs of the programmes they undertook.

And on Independence Day, all units of police are to conduct a special parade to salute the Tricolour, and senior inspectors and administrative officers are to ensure that the national flag is hoisted at all police stations and department offices. Assistant police commissioner and deputy police commissioners have been tasked with overseeing 100 per cent implementation of the same.

This comes amid the constant criticism faced by the city police force over the rising number of crimes and dipping detection rate. A police officer said, “We are already overburdened and also pressed into bandobast duties for VVIP movements. And such a task will only make policing more challenging as our resources will be busy with this instead.”

“There is nothing wrong in being a part of the government’s campaign, however the police are already overworked. Being a part of emergency services, the police don’t have a holiday cycle like others. I think the police force should not be used in campaigning,” a cop said requesting anonymity.

Another police officer said, “Policing is a challenging job as one needs to be on their toes always as crime could take place at any time or an emergency situation could emerge. Being a part of the police force, most of the time we are the first respondents. And when cops are pressed into such duties, our attention is diverted which could only benefit the criminals.”

“The government has no shortage of manpower. They have many such departments where people are relatively free and yet enjoy all the holidays. Then why are we being used for such tasks which could be given to any other department,” asked yet another cop. As per the circular, the 75th Year of Independence Day of India logo will be displayed between August 11 and 17 while the Har Ghar Tiranga campaign will be undertaken from August 13 to 15.