With international export coming to a halt and stricter rules for transporting mangoes to the markets, Rs 3,000-crore-industry in the region might be worst hit this season 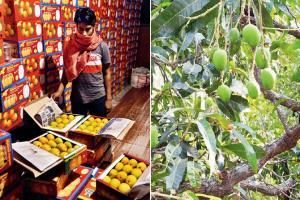 A fruit vendor in Bandra waits for customers at his shop in Bandra Pic/Pradeep Dhivar; (right) Alphonso mangoes at Umesh Lanjekar's orchid


The corona outbreak and the subsequent lockdown in the country, has left several mango cultivators in the Konkan belt worried, as uncertainty looms over the Rs 3,000 crore-industry. Alphonso mangoes from the Konkan region usually get exported to the US and European countries during this period.

The slump in trade was also visible at the APMC in Vashi, with just a handful of vehicles carrying mangoes, making their way into the fruit market.

Umesh Lanjekar, a farmer, who owns Alphonso orchids in Ratnagiri and has been in the business for decades, said, "We just received permission two days ago from the district agriculture department, to allow a driver and four labourers to transport the mangoes from the orchid to the packaging centre, subject to all workers wearing safety gear."

According to Lanjekar, the flowering of mango trees was also delayed this year. "This was a warning sign. Nature warns us in advance about the changes in and around us, but we tend to ignore it. The harvest should happen any time now, as mangoes have started ripening," he said, adding, "With international flights cancelled, we cannot even export our produce."

The Konkan belt depends mostly on fishing and mango cultivation. While fish can still be preserved in cold storage, the mango is a highly perishable fruit with a limited shelf life. "Even apples and oranges can be stored for nearly six months to a year in cold storage. Unfortunately, we do not have any technology to extend the shelf life of mangoes," said Lanjekar. He added, "We do not know how long the lockdown will last. The need of the hour is to improvise R&D in the agricultural sector. There should be emphasis on cheap and effective technology to preserve the fruit."

When contacted, Dr Anand Kumar Singh, deputy director general, Horticulture at the Indian Council of Agriculture Research, Ministry of Agriculture, Delhi, said, "We are equally concerned about the present situation, as the lockdown has impacted industries, which were playing a pivotal role in packaging, transport and quality check. This has directly affected the mango industry. The situation may worsen, if the lockdown period continues beyond April 15."

India produces nearly 2.2 million tonnes of mangoes every season, with states like Uttar Pradesh, Andhra Pradesh and Bihar being the largest contributors for the kesar, dashiri and langada variety. Alphonso from Konkan has a large market in the US and Europe. "The Ministry of Agriculture is closely monitoring the situation and its impact. The pandemic outbreak is also adversely impacting wheat cultivation in Northern India," said Singh. Sanjay Pansare, director at APMC, said the state
government should announce a special package for the seasonal farmers.

Catch up on all the latest Crime, National, International and Hatke news here. Also download the new mid- day Android and iOS apps to get latest updates