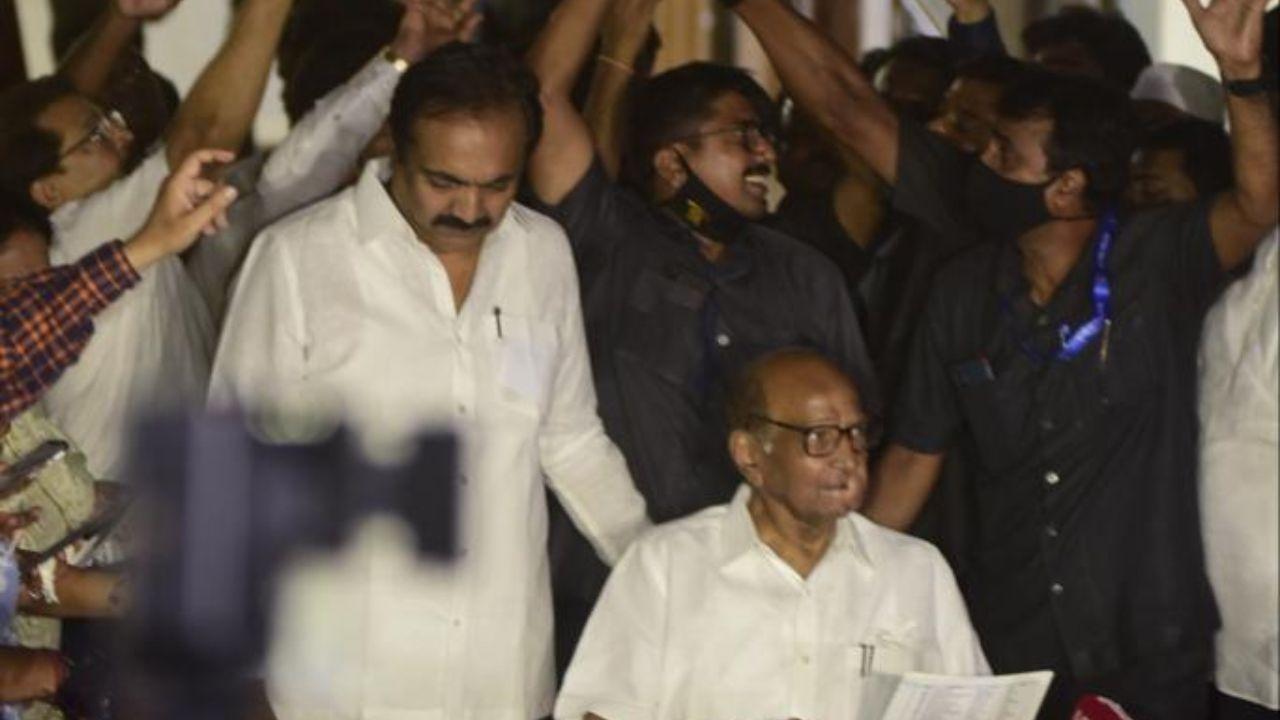 Sharad Pawar after the meeting of NCP MLAs, at YB Chavan Centre, on Thursday. Pic/Atul Kamble


It’s finally on record. Even before the Bharatiya Janata Party could officially speak about its support to Eknath Shinde’s revolt in Maharashtra, the leader himself admitted on Thursday that he has been promised all support by the ‘mahashakti’ that has taken on Pakistan, giving clear indication of the BJP’s involvement. After his meeting with the party MLAs, MPs and leaders, Sharad Pawar confirmed the BJP as Shinde’s partner. Shinde made the reference while addressing the rebel Sena MLAs at the hotel they are staying put in Guwahati, Assam, after he was elected as their Legislative Party leader.

Shinde’s speech was recorded and the video was released by his office, after a few NCP leaders sarcastically commented that they didn’t see the BJP’s hand in the entire episode. “Let’s be together in happiness and in trouble. The victory is ours. A national party, a mahashakti that has taken on Pakistan…has told me that the decision I have taken is historic for the country. It has promised to provide us all help. You will see it,” Shinde says.

It was evident that Shinde and his group had already made up their minds to align with the national party [BJP]. The statement was seen as a rejoinder to the chief minister’s faction that appealed through party’s chief spokesperson Sanjay Raut, and gave the rebels 24 hours to return home. Thackeray would consider their demand for exiting the Maha Vikas Aghadi coalition, they were told.

“If you are Sainiks, be brave and show guts to land in Mumbai,” said Raut. It sounded like an appeal laced with warning and instruction for the party workers to be ready to give a Sena-style welcome to the rebels.

The video from Guwahati was released immediately after the Nationalist Congress Party leaders, including Ajit Pawar and state president Jayant Patil, commented sarcastically that they didn’t see the BJP’s hand in the entire episode. Congress party’s state chief Nana Patole, however, saw the BJP as a driving force. Patil wondered who was making all the arrangements, like the luxury stay and the aircraft, for Shinde’s group. Ajit Pawar and Patil said their party would stand by Thackeray to save the government.

An hour before Shinde’s footage was made public, Opposition leader Devendra Fadnavis left for New Delhi, in a signal that the BJP would come out with guns blazing to topple the Thackeray government. So far, the BJP has maintained a stoic silence. In fact, it issued a gag order to its leaders, especially the verbose ones. Sources said the BJP high command is in full control of Operation Lotus, and Fadnavis has been playing an important role. Neither Fadnavis nor other BJP leaders were available for a comment.

Who else? It’s BJP: NCP boss

After his meeting with the party MLAs, MPs and leaders, NCP chief Sharad Pawar confirmed the BJP as Shinde’s partner. “I have seen the video in which Shinde says a national party has supported him.” He then took out a list of Election Commission-approved seven national parties, and said that only the BJP among them could do it (because others are anti-BJP or have no stakes in Maharashtra).

“Ajit Pawar does not know about the situation or the (BJP) people in Gujarat and Assam. But I know people who are managing (the rebels) in Assam and helped them out in Gujarat,” the NCP boss said. He then went on to name Gujarat BJP president C R Patil, the BJP-led Assam government and the party leaders there.

On the crisis, Sharad Pawar said the rebels will have to come to Maharashtra Vidhan Bhavan. “The BJP may not guide them here. The majority will be proved on the floor of the House. We know why the MLAs went to Assam only after they were here.”

Cautioning the rebels about disqualification, the NCP president said their action was against the anti-defection law. “History proves that those who defected have lost by-elections as well. Similar possibilities cannot be denied in this case as well,” he said, recalling the defeats of Chhagan Bhujbal and others who had quit the Sena to join the Congress.

He also dismissed the Congress’s allegation of injudicious allotment of funds by Ajit Pawar, who also holds the finance portfolio. “The complaints are not factual,” he said while responding to Nana Patole’s accusation.

Next Story : Maharashtra: All eyes on Eknath Shinde after Dy Speaker rejects his request to appoint whip