Maharashtra political crisis: Will the new CM, CP think about us, ask constables

Lower rung cops, especially constables, who have been working for 12 hours and more due to the political crisis, want the authorities to fix 8-hour duties for them 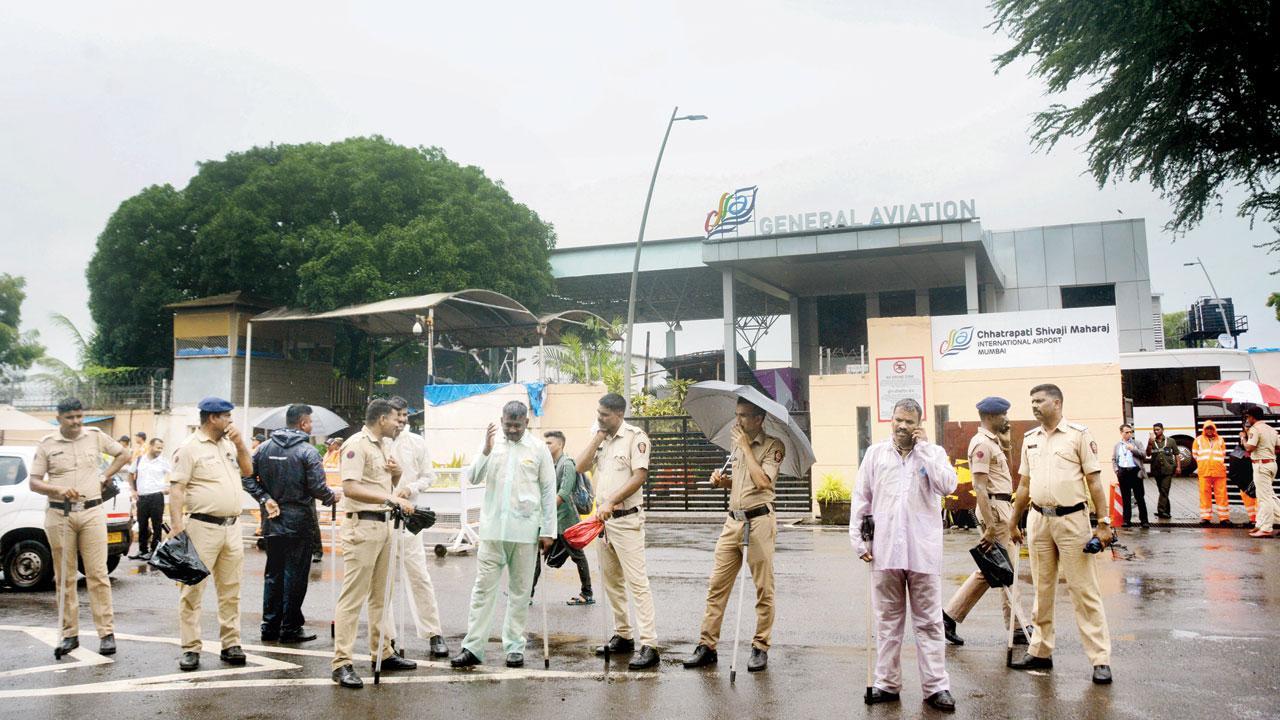 Police bandobast at gate no 8 of the airport at Kalina on Thursday. Pic/Satej Shinde


As politicians were ferried from one state to another in chartered planes and put up at five star hotels due to the crisis in the Maharashtra government, the police were forced to be on duty for longer hours than usual. Many cops spent 12 hours or more working due to the bandobast in the city. Some of the lower rung personnel are now upset with a new order, which they claim officers at the CP office have issued after taking advantage of the political environment, asking ‘constables to work for 12-hours’ until ‘further notice.’

While those who spoke to mid-day said the nature of their job means they have to put in more hours of work sometimes, they want their superiors to think about their well-being, too.

‘What about our health?’

“We have joined the force to work and are ready to work 24X7 in times of emergency in the city. We understand security needs to be beefed up in and around important establishments when the political temperature soars high. But what about our personal life and health issues?” asked a constable attached to Cuffe Parade police station.

Constables were deployed in and around Taj President hotel in Cuffe Parade where the MLAs were to arrive. Security has also been beefed up in and around Raj Bhavan in Malabar Hill. Police constables and senior officers are also seen on Marine Drive.

“If there is VIP movement in the evening, we have to stand on the roads since morning. We don’t get any facilities when we are on bandobast duty. Our female colleagues face a lot of difficulties. There are no washrooms on the road. The politicians, for whom we stand tirelessly on the roads, don’t heed our needs. Will the new chief minister create a Government Resolution (GR) for fixed duty hours for constables across Maharashtra?” asked a constable from Colaba police station.

“Former commissioner Sanjay Pandey listened to our grievances and gave us respite. But four days ago, we received an order which said constables will have to continue to work for 12-hours a day till further notice,” said another constable of the police station.

“We will have to make a fresh appeal before the new commissioner to allow us to work for eight hours a day,” said a constable from Malabar Hill police station. This is not the first time that the low rung police personnel are discontented with an order on their duty hours. In the past too mid-day had voiced their demands.

“Former police commissioner Datta Padsalgikar was like God to us. He patiently listened to our demands and ordered us to work only for eight hours a day. He also tried his best to get his verbal order translated into a GR for which he made several rounds of Mantralaya. But,  politicians do not care about our needs. Ironically, we are always ready with elaborate security arrangements for them,” a constable said.

‘Most constables over worked’

A constable attached to Sagari police station in Mahim said, “We are also human beings, not machines. We need to rest. Most of the constables are over worked and face health issues.” “I can’t do any personal work if I work for 12-hours a day. After work at Cuffe Parade at 8pm, I rush to CSMT and catch a train to reach Kalyan. By the time I reach home it is 11pm. Then I have dinner and go to bed around 12 am. I wake up at 5am to report to Cuffe Parade police station at 8am. How will I survive? Help us, please save us. Think about our health issues too!” urged a constable.