Maharashtra: Tribal woman in Palghar loses twins minutes after delivery as nearest hospital was 12 km away

The district officials could take time out for the grieving family in the tribal hamlet of Markatwadi pada only on Tuesday, as they were 'busy in Independence Day preparations' 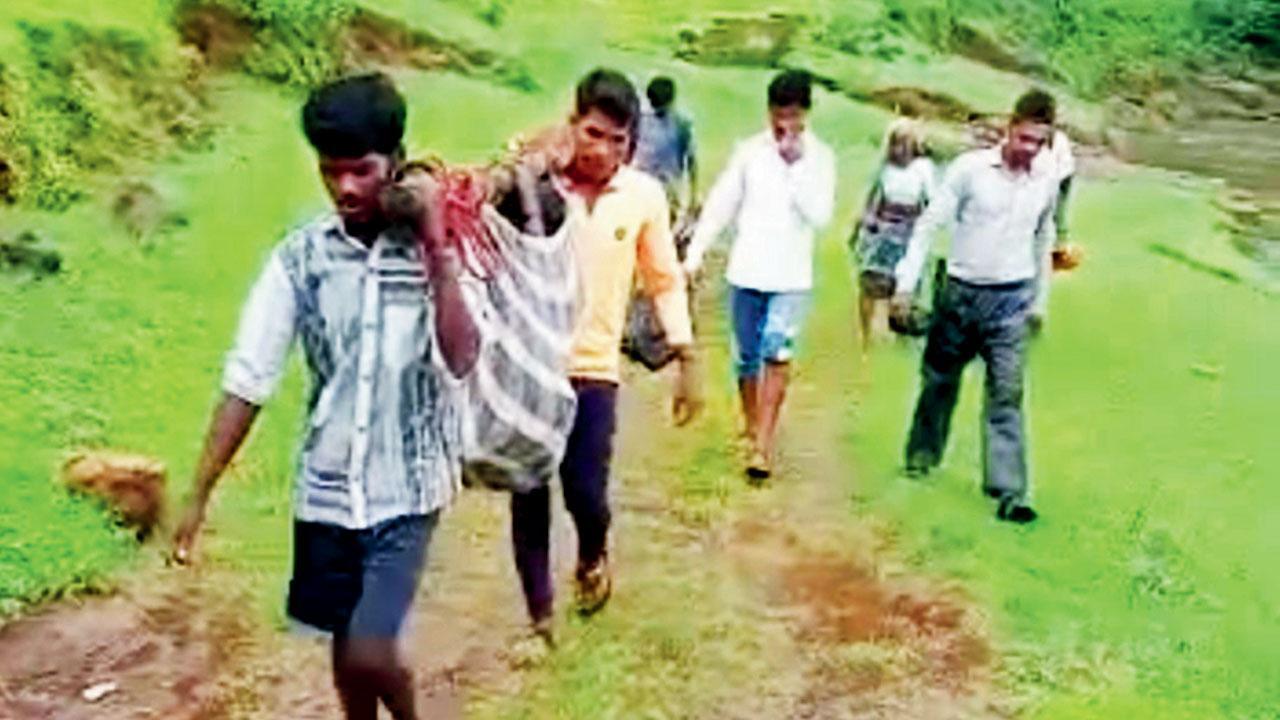 The family and neighbours made a makeshift stretcher to carry the mother and twins to hospital on Sunday. Pic/Hanif Patel


As the nation was preparing for Azadi Ka Amrit Mahotsav, a tribal woman lost her twins within minutes of delivery, at Botoshi village in Palghar district. An activist told mid-day that Vandana Budhar, 26, gave birth at home, as it was a premature delivery, and the newborns died on the way to hospital. “It is shameful that such incidents are happening even 75 years after India got Independence,” said another activist, Vivek Pandit.

The district officials could take time out for the grieving family in the tribal hamlet of Markatwadi pada only on Tuesday, as they were “busy in Independence Day preparations”.

Vandana, who was seven months pregnant, developed labour pain on the morning of August 13 and delivered the twins at home, Sita Ghatal, in-charge of a trust that provides free medical care to malnourished children and their mothers in the tribal belt of Palghar district, told mid-day. 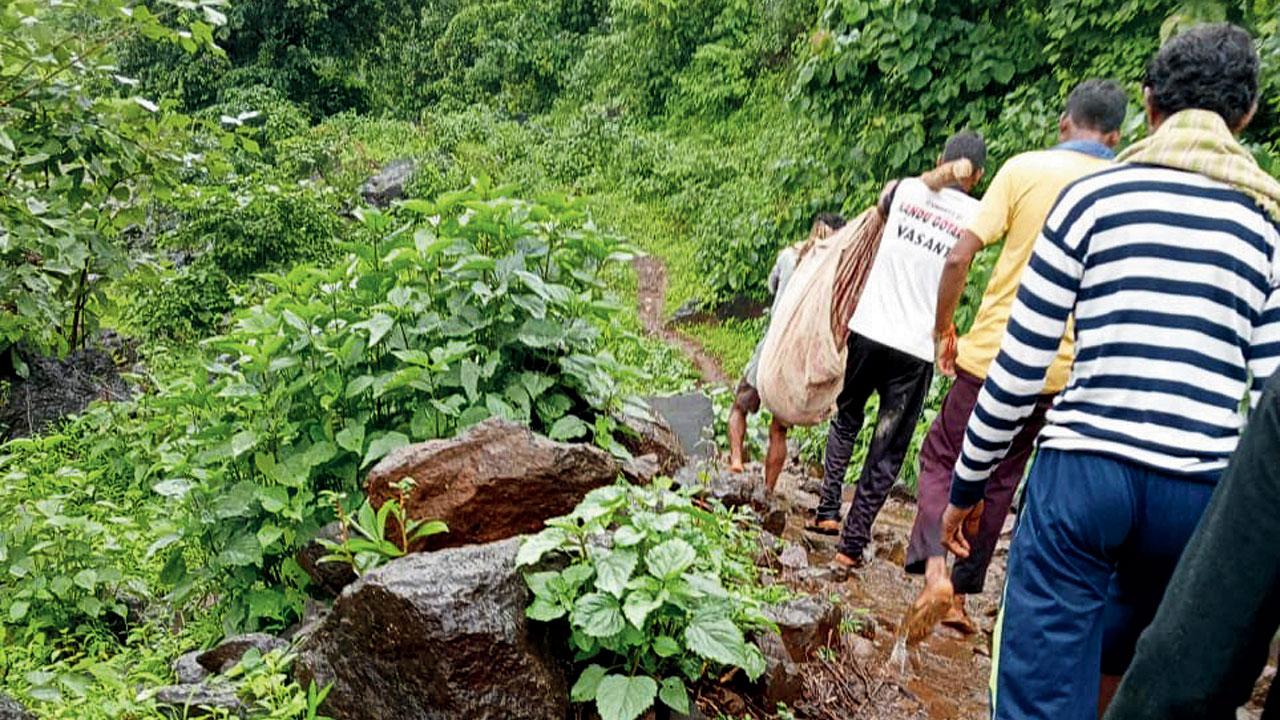 Villagers carry the woman on a makeshift stretcher on Saturday, a day before the delivery. Pic/Hanif Patel

“The newborns developed breathing problems and the mother’s health also started worsening. So, the villagers made a makeshift stretcher out of a bamboo pole and bed sheet to take them to the main road. But, the twins passed away midway and they returned home,” Ghatal said.

The family again headed for the hospital, as Vandana’s health started deteriorating further, she added. “Her husband, brothers and neighbours again carried the woman and her newborns’ bodies in the makeshift stretcher for 4 km, till the main road.”

Botoshi village sarpanch Triyambak Malak said, “I received a call from the family around 10 am on Sunday asking for an ambulance, which I arranged immediately but the twins died before being taken to hospital.”

No road = no ambulance

Social worker Tukaram Pawar said, “The nation is celebrating Azadi Ka Amrit Mahotsav, but we do not have a road in this village even in 2022. The twins died as no ambulance could reach here. Had there been road connectivity, we could have saved the lives of newborn babies.”

“The woman, who was writhing in pain after the delivery, was helpless as she saw her children die in front of her eyes. This pain is beyond anyone’s imagination,” Pawar said.

“Five dozen families, comprising 250 members altogether, live in the village. They suffer because there is no road even 75 years after Independence,” he added.

Palghar district’s civil surgeon Dr Sanjay Bodade said that there are no roads in the village, and that an ambulance was waiting for the family on the main road, 4 km away.

The nearest hospital from the woman’s village is about 10-12 km away.

“I am not aware of the actual cause of newborns’ deaths, but it’s a case of stillbirth, as tribal women do not take rest during pregnancy. It is a case of pre-term delivery. The labour could have precipitated due to physical work,” Dr Bodade told mid-day as he headed to the village to take stock of the situation.

Speaking with mid-day, District Health Officer (DHO) Dr Dayanand Suryawanshi said, “It is a case of stillbirth as the twins did not cry after delivery. The woman was taken to PHC Khodala on Saturday, but after a few hours, her husband got her discharged against medical advice and took her to Wada to her parental house.”

Dr Suryawanshi said that ASHA workers were in touch with the family thereafter, but sources told mid-day that no medical officer visited them until Tuesday. “After the woman got discharged, no medical staff visited her as they were busy in the preparation of Independence Day. But the news became viral and officials started running to meet the victim,” said a source.

Dr Suryawanshi told mid-day that an enquiry has been initiated to find out what went wrong with her health that caused premature delivery.

‘Lack of political will’

Activist Vivek Pandit, who has been fighting for tribals’ rights in Maharashtra, said, “It is shameful that such incidents are happening even 75 years after India achieved independence. This incident reflects lack of political will even after 75 years. The politicians have neglected the tribal belt of this state for far too long, because of which even the basic amenities have not reached the tribals.”

He alleged that 51 per cent of the positions in Palghar health department are vacant. “There are no gynaecologists, aestheticians, nor paediatricians at the rural hospital. There is no curative health facility in Palghar district,” Pandit added.

“If no change is made now, we will remain the same even 100 years after independence,” he said.

Dr Bodade said, “As far as the availability of doctors at hospitals is concerned, medical practitioners are available at all the hospitals.”

“After the tragedy, Vandana was brought to Wada taluka, her parental home, where she underwent medical treatment at a public healthcare centre, and on Tuesday, she was admitted to a rural hospital in Wada,” said a senior health official.

“Many politicians and senior government officials including DHO Suryawanshi, ADHO Dr Sagar Patil and their teams made a beeline to the rural hospital after the incident,” the health official added.

The same day, a 25-year-old pregnant woman was also carried to the main road in a makeshift stretcher, from where she was taken in an ambulance to hospital, said Pawar. In July, mid-day highlighted two similar cases from Markatwadi pada.

Meanwhile, Palghar District Collector Govind Bodke said, “The order to construct the road in Markatwadi pada was passed in April-May, but got stonewalled due to monsoon. The construction work will start after the rainy season.”

4 km
Distance from their home to main road