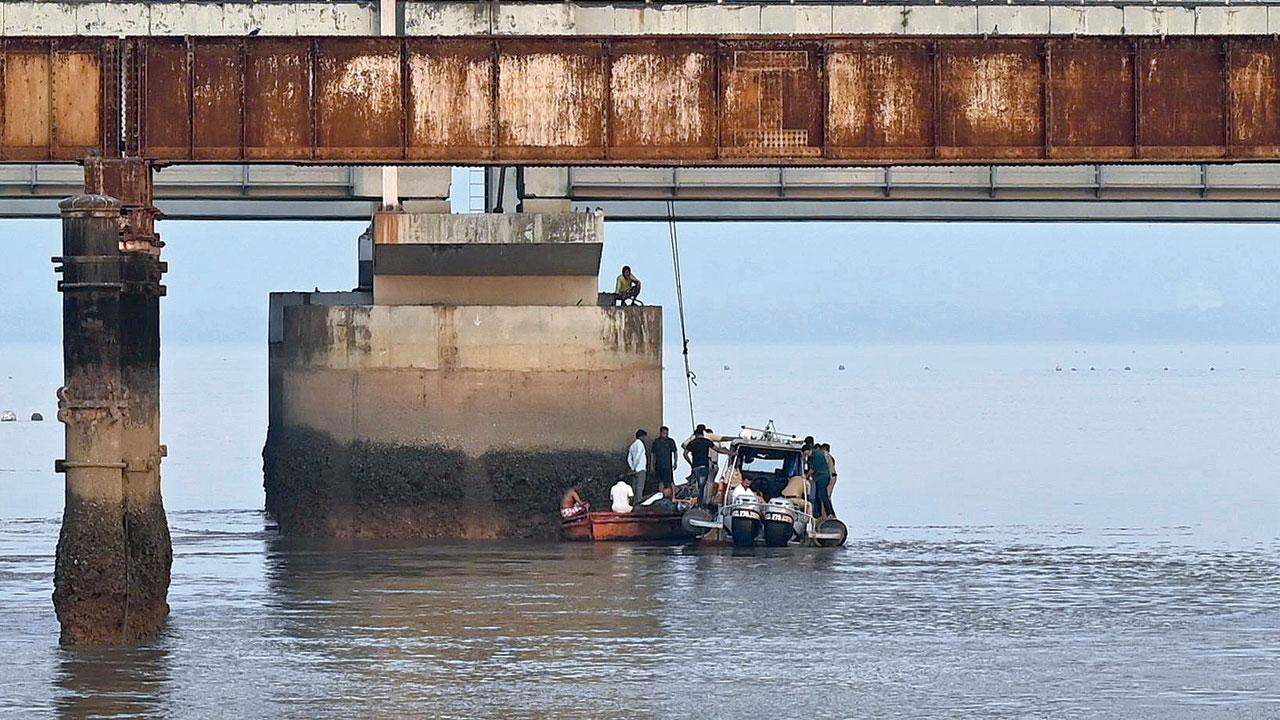 A team of cops and a diver at the Bhayandar creek, on Thursday. Pic/Hanif Patel


The Delhi cops probing the murder of Shraddha Walkar could not retrieve her mobile phone from the Bhayander creek because of strong underwater currents, sources told mid-day on Friday. Aftab Poonawala, who allegedly killed her, claimed to have dumped her phone in the creek.

The spot where Poonawala claimed to have dumped her phone is around 35-feet deep, but the diver, despite several attempts, could reach only 15-20 feet under due to strong currents. Also, the bed of the creek is filled with 10-feet of marshy soil, sources said.

A Delhi police officer said, "We took the help of Manikpur police and appointed the best diver who is from Ghodbunder police chowki. Our team in Delhi sent us the location of the phone and a sketch of the railway bridge at Mira Bhayandar creek. Poonawala told the investigating officer that he visited this spot after Manikpur police interrogated him over Walkar’s missing complaint.”

“Poonawala told the cops that he walked on the old railway bridge until the fifth pole and threw Walkar's mobile phone in the creek," the officer said. The Delhi and Manikpur cops reached the spot around 2 pm on Thursday.

“The diver went into the creek, but the current was too strong and he was unable to stay at one place for more than a few seconds. We took two ropes, fixed it on the bridge and used these to support the diver. Nothing helped him dive to the bed of the creek,” the officer said. Police believe that the mobile, which would weigh at least 200 grams, cannot flow and must have sunk to the bed of the creek. The marshy soil in the creek bed is around 10-15 feet deep, the officer said, adding that the diver made more than 20 attempts.

A fisherman from Ghodbunder told mid-day, “If a mobile phone fell at this spot, it will not move to any other place because of the marshy soil that is deep. Police need strong equipment to retrieve the mobile phone. A few days back, a waterproof camera of a construction company fell at this spot and it was found 7 days later in the marshy soil. There are chances to recover the mobile phone, but the police will have to work on it. It is not a one-day job. They would have to spend at least a week to find the exact spot.”

Sources from Manikpur police station said, “The Delhi police have not taken any strong step in Vasai so far to investigate this matter seriously. They are only recording the statements. They conducted a one-day search operation for the mobile phone at the creek. All this just so that they have something to submit before the court as part of the investigation procedure. Until now, the Delhi police team in Vasai has not found any strong evidence.”

20
No of attempts the diver made to retrieve the phone

Next Story : Constitution Day 2022: The importance of judicial activism