Metal in fruits and vegetables: How much is too much?

mid-day investigation reveals the presence of nickel and MSG in fruits and vegetables; however, experts say there is no system to gauge the permissible limits of such substances in raw materials 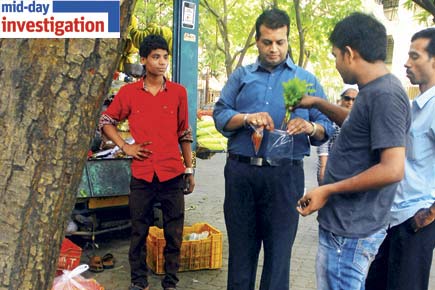 While the Maggi controversy continues to simmer, mid-day decided to test food grain, fruits and vegetables all of which are ingredients that are used in instant fast food products to see if these contain any heavy metal or monosodium glutamate (MSG). 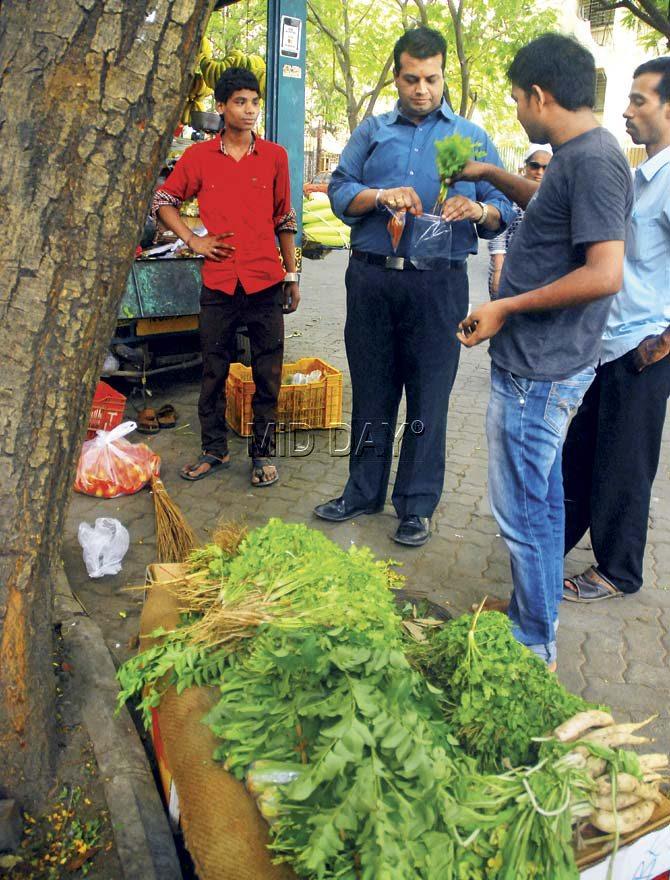 mid-day bought the vegetables from the local market and food grain from a kirana store. The samples were then sealed in airtight packets

It was the presence of these two substances that landed the noodle brand in a soup, stirring trouble for other instant noodles in the country as well. The samples were sent to a state-of-the-art laboratory of a premier institute in the country. 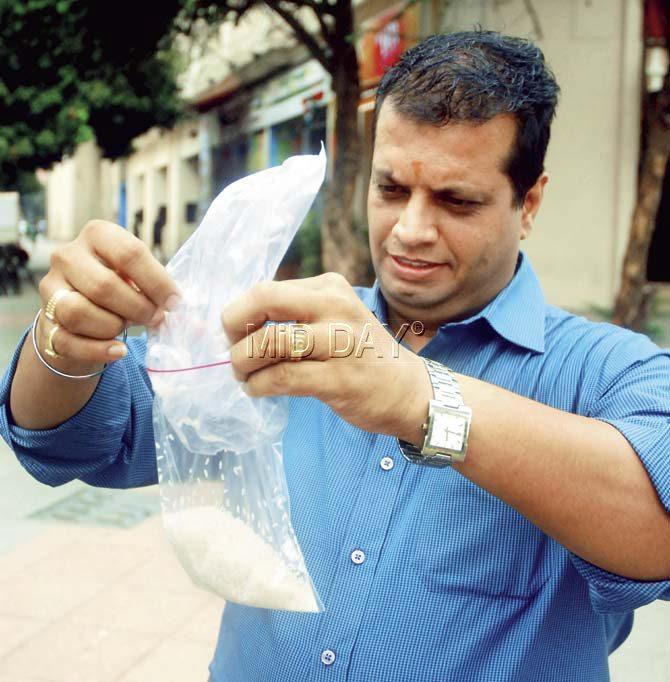 And sent to the laboratory of a premier institute in the country. Pics/Sameer Markande

Test results did show up the presence of nickel, a heavy metal, in raw carrot and coriander, and MSG in rice and wheat. However, the food safety authority of India has no scientific database by which one can gauge whether the presence of such substances in these raw materials is above permissible levels. 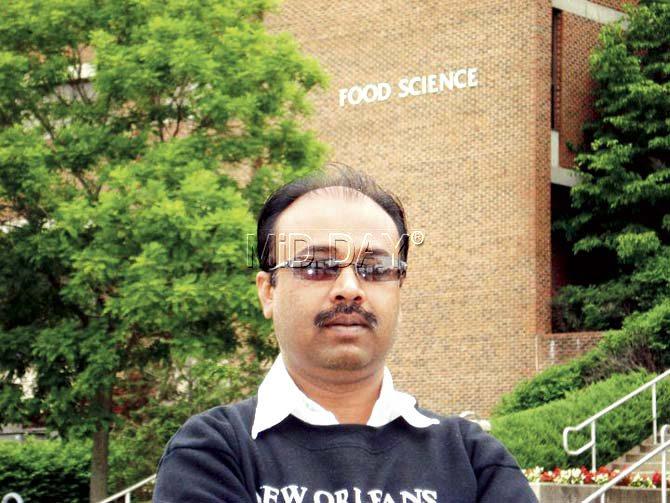 Among the vegetables we sent for testing were carrot, coriander and onion; the fruits analysed were watermelon and mango, and rice and wheat comprised our representatives from the foodgrain category. The laboratory this paper approached agreed to conduct qualitative analysis of our samples.

Also Read: Un-noodling the Maggi controversy: What is the truth? 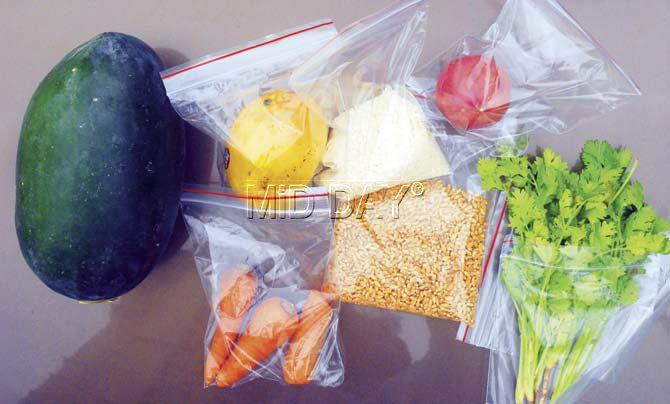 Raw coriander and carrot were found to have nickel. No other heavy metal was found

As advised, food grain samples were collected from a provisional store and fruits and vegetables from a regular market. Since the tests were not being done for any microbiological findings, the samples were handpicked and then sealed in airtight packets. All samples were then handed over for testing.

Findings
A qualitative scan was conducted for vegetables and fruits (mid-day has a copy of the reports). Except nickel, no other heavy metals were found in any other vegetable or fruit given for testing (see table), and the results showed the presence of nickel in coriander – 0.74 ppm (microgram/gram) and carrot –1.34 ppm (microgram/gram).

As far as MSG is concerned, rice showed 405 ppm of MSG, and wheat 7.3 ppm, which is said to be within the normal range. Dr Wiqar Shaikh, professor of medicine, Grant Medical College, said, “One major problem of nickel we have seen is allergic contact dermatitis. Nickel is used in artificial jewelry, and those allergic to nickel may get lesions and itching around the affected areas.

It is also seen in coin handlers or those sitting at cash counters in restaurant and shops; these people who handle change have complained of nickel allergy on their fingertips. Unfortunately, we have been overeating most of the heavy metals in our daily food, as most vegetables and fruits are grown using pesticides and fertilisers and contaminated water. So far, we have seen rampant cases of infectious diseases like tuberculosis, malaria and typhoid, as compared to heavy metal toxicity.”

Noted nephrologist Dr Bharat Shah said, “All heavy metals like lead, arsenic, mercury are toxic to the tubulointerstitial (a layer in the kidney) component of the kidney. Sustained toxicity can lead to chronic kidney disease, which can lead to permanent and irreversible kidney ailment. More than vegetables, it is alternative therapies (Ayurveda/Unani, etc), which are not authentic, which contribute to liver and kidney damage, as these drugs are carriers of heavy metals.”

Allowed or not?
What is surprising is that the Food Safety and Standards Authority of India (FSSAI) has no yardstick or scientific database by which one can say that a certain quantity of metal in raw material is above permissible limits. In fact, traces of minerals have been found in almost all foods, including the two samples we sent, said food scientists, adding that there is no scientific database to show the permissible limit for raw materials.

In a recent statement, the Centre for Science and Environment (CSE), a public-interest research and advocacy organisation based in New Delhi, had said, “On the one hand enforcement of food regulation, labelling, advertising, and promotion must get stringent as consumption of packaged foodstuff grows, but on the other hand we must not forget that the quest for good food also involves caring about the health of the food chains and ecosystems of which we are part, and about policies and agreements which influence the accessibility of good food.

All stakeholders, including the government and industry, must take responsibility for good food and consumers must be able to make informed dietary choices.” Food scientist Dr Deepa Bhajekar, director, D-technology, a food technology firm, said, “Given the recent stir because of the presence of heavy metal in a popular fast food, it becomes imperative to evaluate further what the source of these contaminants is. These could arise from groundwater and soil, or some raw material used in the manufacture of finished products.

“A huge food safety initiative needs to be taken on a pan-India basis over a period of one year, to understand the genuine issue in different geographical locations in India. This will bring to light solutions that could be put in place to entirely eliminate any problem of contamination. This will help generate a scientific database on contaminants for the missing commodities like fresh fruits and vegetables, which are major ingredients in fast foods, for which we have no data in place. Such a study will help to understand the key areas that need focus going forward, while embarking on a strong food safety initiative in India,” Dr Bhajekar said.

Speaking to mid-day, Dr Uday Annapure, past president of the Mumbai chapter of the Association of Food Scientists and Technologists of India, admitted that the food technology industry in India, at present, does not have any scientific database for raw material to rely on. “At present we are dependent on the methodologies given by the European Union Standards or FSSAI/ Food and Drug Administration (FDA), but one must understand that different studies are analysed using different methodologies, which are mentioned in various journals. Unfortunately we have no standard, scientifically approved database even at the national level.

Even the Council for Scientific and Industrial Research (CSIR) database is too old and has not been updated for years. A regularly updated database is needed especially when the environmental factors are changing i.e., climate, water, soil quality and, ultimately, the end produce is affected, disturbing the ecological food chain pattern. It high time that the government authorities take this seriously and budgetary provisions are made for carrying out research-based food analysis and data collection for the future in context to India’s scenario.”

Dr Shobha A Udipi, professor and head, department of food science and nutrition, SNDT Women’s University, Mumbai, added, “We do not even have a database on nutritional values of processed food. Such research and studies are expensive and require high-tech equipment, chemicals, etc., for conducting such a large-scale study; it will be unfair to expect everything from the government. We need scientific infrastructure built by funding scientists or groups of scientists to carry out extensive research.

There has to be continuous awareness and knowledge-sharing on food quality and nutrition, for which academicians, scientists, and the media should, without sensationalism, place true information before consumers.” Another senior scientist who did not wish to be identified has expressed serious concerns, stating that the FSSAI and the government should take serious note of the current row over noodles.

“We are coming up with standards left, right and centre, rather than carrying out a high-level probe about the manner in which licences were granted to companies involved in the instant food business, without even conducting periodic checks. Failing this, they become easy target in the hands of the FDA officials.”

The scientist added, “Rice grown in West Bengal will have high levels of arsenic, as the soil itself is contaminated there; wheat from Punjab is bound to show high levels of phosphorus as pesticides and fertilisers are used rampantly there. Unless there is a scientific database approved by the FSSAI or FDA, showing the permissible limit of heavy metals for raw material, it will only cause such issues again and again.”

Maggi in UP
While most states in the country have banned the sale of Maggi, Uttar Pradesh whose FDA authority carried out the tests and found MSG beyond permissible limits is still allowing the sale of the noodles. mid-day spoke to the officer who was instrumental in these tests V K Pandey, the district officer of Barabanki, UP FDA. He said, “We have done our job, but the question why Maggi has not been banned in UP can only be answered by my Commissioner (FDA), Praveen Kumar Singh, or the state government. I cannot say anything further.”

Next Story : Week after Freeway accident, woman in Mumbai booked for drunk driving