As officials reject their Shramik Express applications, those with only local ID proof are scurrying to source soft copies of voter IDs and ration cards 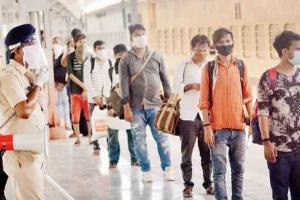 
Even as the desperation to reach their homes continues, migrant workers stuck in Maharashtra are faced with a new challenge. Most of their applications for returning home have been rejected by the authorities concerned as they have their local addresses on their Aadhaar cards. Even though they have their voter ID cards and ration cards on their phones, lack of printing facilities is proving to be another major hindrance

The migrants from Mumbai, Thane and Navi Mumbai who have their local addresses on their Aadhaar cards are not being allowed to return, as they have no other way to prove that they are non-residents of this state. Some of them claimed that they had come to Mumbai only for work and got the Aadhaar card made to open bank accounts and procure sim cards and driving licence. A number of migrant labourers working at different power looms in Bhiwandi are natives of Bihar and Uttar Pradesh but they can't avail the government's Shramik Express facility for the same reason. The police and collector offices believe that as they have their local addresses on Aadhaar cards, they are Mumbai residents, and hence would not be allowed to go to any other state.

Currently, in Mumbai around six lakh migrants want to return to their hometowns in Uttar Pradesh, Bihar, Andhra Pradesh, Rajasthan and others. Of the total, 2 lakh people have a Mumbai address on their Aadhaar cards. 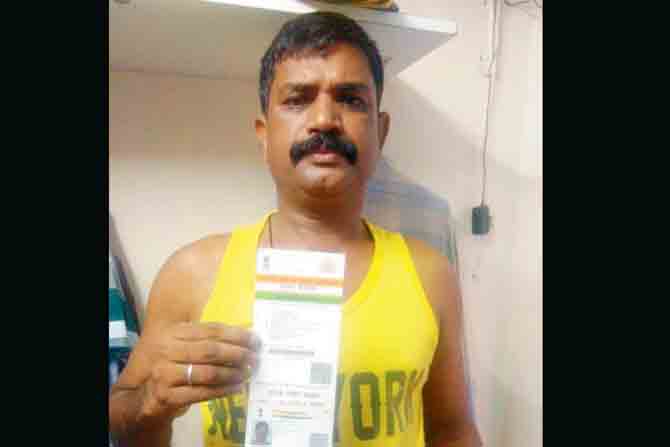 Speaking to mid-day, youth Congress president of Mira Bhayandar, Deep Kakde said, "Till now applications of more than 3,000 migrants have been rejected because they have a Mumbai address on their Aadhaar cards. These people have been working in the city as labourers. We have prepared a list of the names of those whose forms have been rejected and we are trying our best to send them home." "Some of them are also lying and hiding the truth. An entire family claimed that they are migrants whereas they have been running a shop in Mira Road for the past 20 years. How can we trust people?" he asked.

According to sources, most of the migrants get their Aadhar cards made illegally from various centres. Once they get a job in Mumbai, they have to open a bank account for which they need the Aadhaar card. Sources further said that with the help of the company owner, they submit a R100 stamp paper and a document saying that he stays at the company address in the city. Based on this document they can open a bank account and even get a driving licence.

Speaking about the problems they have been facing, Saket Rai, who is originally from Uttar Pradesh said, "I have been working as a labourer at a steel transportation company in Bhayandar for the past five to six years. I am originally from UP but as I am working in Mumbai, I got the Aadhaar card made on the local address with help from my company owner. I submitted my form after standing in the queue for six hours but it got rejected. I had also submitted my medical fitness certificate from a doctor. I have other documents like ration card and voter ID card but even they have been rejected." 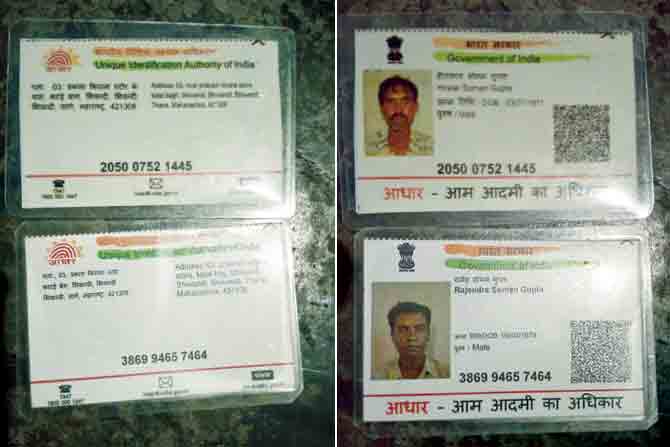 Rajnath Arjun Rajbhar, who works in a godown at Worli, said, "My form also got rejected because I submitted an Aadhaar card with a Mumbai address. I live in a rented accommodation in Bhayandar and have no money left. I have spent all of it on groceries and rent and now it's impossible to survive. I want to go back to my home in Uttar Pradesh."

Another migrant, Chandrabhan Yadav said, "I have been working at a steel company in Bhayandar for the past five years. After marriage I got my wife and two kids here from Uttar Pradesh. I'm a daily wager and have already exhausted my savings. I want to go back home now. My forms also got rejected because my Aadhaar card has a Mumbai address. The government should allow us to go back as we can't survive here."

Ishwar Paswan, a resident of Koderma in Jharkhand, has been working in the city as a cab driver. Speaking to mid-day, he said, "I had submitted my form at the Vile Parle police station a week ago but have not got any response yet. I guess it has been rejected as the address mentioned in my Aadhar card is of Mumbai but I am originally from Koderman. Don't know how I'll go back."

A power loom daily wager, Madan Shah, who hails from Bihar's Madhubani district, said, "I have a Bhiwandi address on my Aadhaar card. I had gone to the authority concerned with my application, but they turned me away after checking the address. I don't know how to go back home now. I may start walking to Madhubani because the government is not helping me." Mahesh Kumar Sahu too has been working at a Bhiwandi power loom since years. "After the government rejected my application, I asked my relatives to send my election and ration cards to prove that I hail from Bihar. I got my Aadhaar card made here because it was needed for opening a bank account," said Sahu. 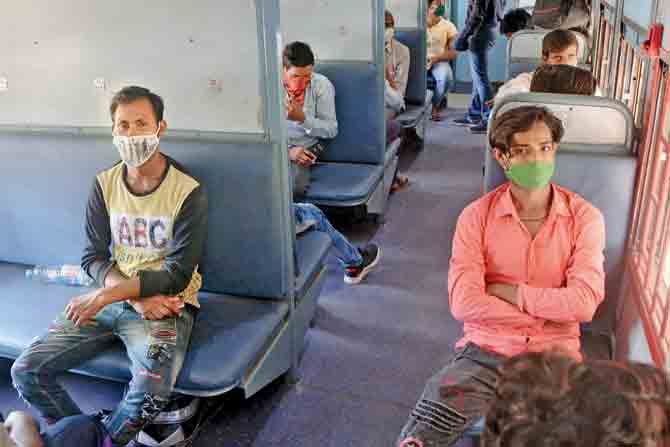 Migrants board a train from the LTT for their hometown Gorakhpur on Friday. Pic/Sayyed Sameer Abedi

Another power loom worker, Rajendra Gupta said, "I had registered online four days ago to travel by train to Madhubani district, but I'm yet to get any update."

Usha Jitesh Vora, a Vidhan Sabha booth committee president, said, "From a list of 1,200 people we have, applications of more than 400 have been rejected due to the address problem. We have submitted the names of these 400 people to the Mantralaya for permission."

'Govt should allow them'

When contacted, an UIDAI source said, "Aadhaar card is not a mandatory document as a resident proof. The government should ask for other documents from migrants and allow them to travel after verification. If any migrant wants to update the address with the MLA certificate, they can do it online because Aadhaar card centres are closed now."