Vashi Footover bridge collapse; the bridge was only 20 years old

Bridge, which is 20 years old, was built by CIDCO 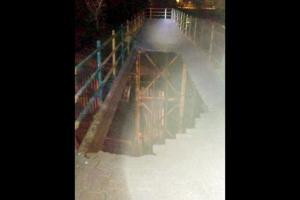 The 20-year-old bridge suddenly caved around 9.30pm on Thursday


A part of a foot-over-bridge (FOB) in Vashi sector 8 collapsed suddenly around at 9.30 pm on Thursday, leaving a gaping hole in the bridge and injuring two people who were using it. The FOB, constructed by CIDCO, is just 20 years old.

Also Read: Mumbai to get 30 new footover bridges in the next one year

According to officials, on Thursday night, a few people were using the bridge when it suddenly caved in. Two people who were walking on the caved-in portion at the time fell to the ground and were injured. They were immediately taken to the hospital. Other passers-by who saw the incident informed the police and the disaster management cell of the Navi Mumbai Municipal Corporation (NMMC).

Regional Disaster Management Cell Chief Santosh Kadam confirmed the incident and said that two people were injured as the FOB at Sagar Vihar crashed around 8 pm. They are yet to identify the injured. Officials were checking with CIDCO and NMMC officials about its structural audit report.

Fire brigade personnel rushed to the spot and the injured were admitted to a nearby hospital, he said. The incident comes less than a month after a similar bridge collapse at CSMT in Mumbai, which had claimed seven lives.