Mumbai: A gang that gets cards stuck in ATMs

Cops arrest one member; learn they insert thin metal plate in slot to get card glued; when customer goes to seek help, they flee with the plate and card 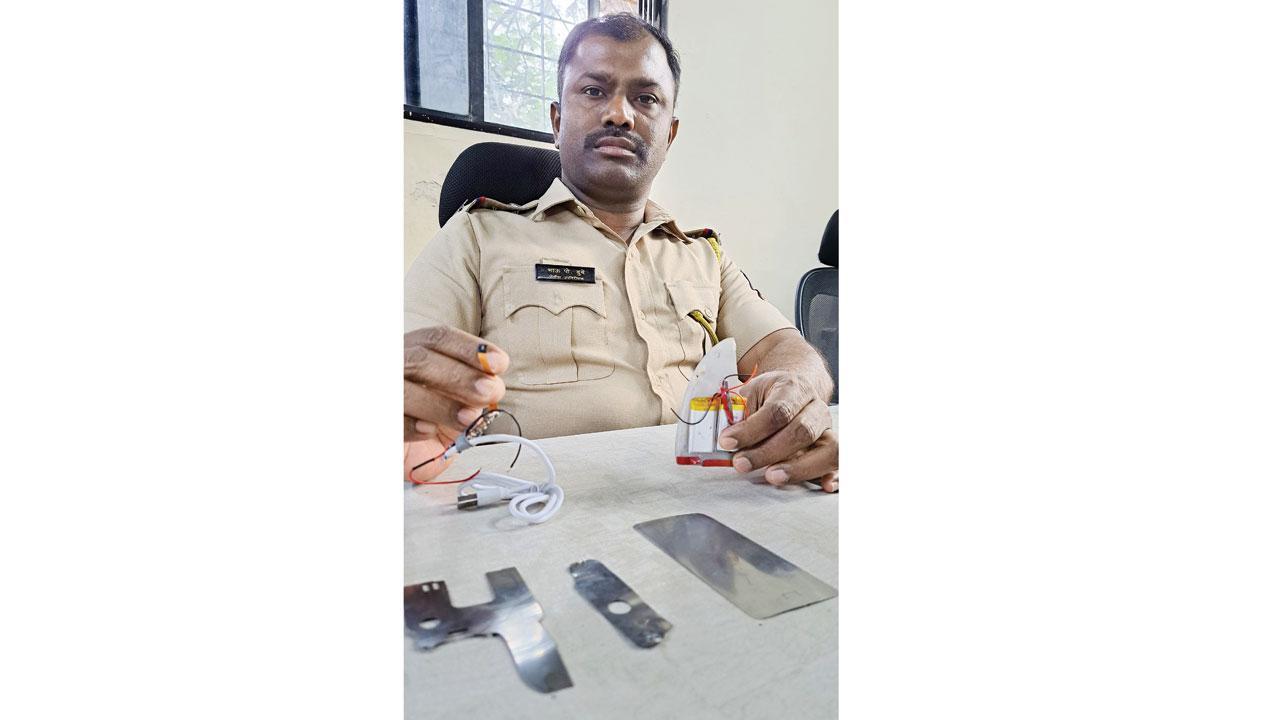 A police officer shows the metal plate used by the accused


The arrest of a con man at Mira Road on Saturday has revealed a new modus operandi by thieves, who create a problem in ATMs to steal credit/debit cards. In this new con job, a thin metal plate is put into the slot where credit/debit cards are inserted in the ATM. The card gets stuck to the plate, and when the customer goes into the bank to seek help, the thieves flee with the metal plate and the card.

PSI in the right place

Police Sub-Inspector Sanjay Shelke, attached to Kasturba Marg police station, was at Mira Road while going home when he saw a man being chased by some people, and followed him on his bike and caught him. He learnt that the man was with two accomplices at an ATM booth and they were behaving suspiciously so they were questioned by a customer. “When the trio realised they were cornered, they tried to run away. While two of them escaped, this man was caught by the customer, passers-by and me,” said Shelke.

“During the interrogation the accused confessed to the crime and also revealed the identity of his two accomplices, he has been booked and arrested under sections 379 and 511 of IPC,” said an officer from Kashimira police station.

The arrested accused, identified as Naresh Purshottam Parmar, 21, hails from Gir, Somnath district in Gujarat. During Parmar’s interrogation, it was revealed how his gang members were duping people by getting their credit/debit cards stuck in ATM machines. So far they have committed three crimes in three places including Borivli, Bhayandar east (Navghar) and Mira Road. “We have seized card cloning machines, a micro camera and three very thin plates made from metals from Parmar,” said another officer.

During the interrogation, it was revealed the gang member would plant a very thin metal plate in the slot where cards are inserted in the ATM to withdraw cash. After the transaction, when a customer tried to take his/her card back, it would get stuck due to the inserted plate in the machine. The police said the accused who would be present in the booth, would see the pin numbers and when the customer would go into the bank for help, they would flee with the thin metal plate along with the card. They then withdrew cash from other ATMs and shop with the stolen cards.

Three such incidents happened between December 1 and December 3 in Borivli, Bhayandar east and the Mira Road area. The accused withdrew cash and shopped for jewellery worth about Rs 1 lakh after stealing a card in Borivli. On December 3, the trio stole a debit card from an ATM at Navghar and withdrew R28,500  from a 52-year-old railway employee.

As per the statement given to the police, when the victim came to withdraw cash, he was unable to insert his ATM card in the slot. “One of the accused forcibly pushed the card in the slot. The victim withdrew some cash but when he tried to remove the card it was stuck. The accused’s associates asked the victim to call a bank employee. The victim was told the card would be retrieved after a technician arrived. The victim returned to the booth and saw the card was still in the slot. He called and informed his wife as well as customer care and left. But when he reached his house he started receiving messages about withdrawal of cash,” the officer added.

Speaking to mid-day, Bhau Dube, sub-inspector attached to Kashimira police station, said, “The gang members came to Mumbai from Gujarat. So far it has been revealed that the accused has committed three thefts this way. The arrested accused was produced in court and remanded in police custody till December 7. My request to people is to take precaution and remain alert. If such a thing happened to them, they must not leave the ATM booth. They should call bank employees and security guards.”

Next Story : Navi Mumbai: Woman dies after jumping off building with 5-year-old son