Mumbai: After success of digital bus service, BEST to start ‘Tap-In, Tap-Out’ on 12 more buses from May 9 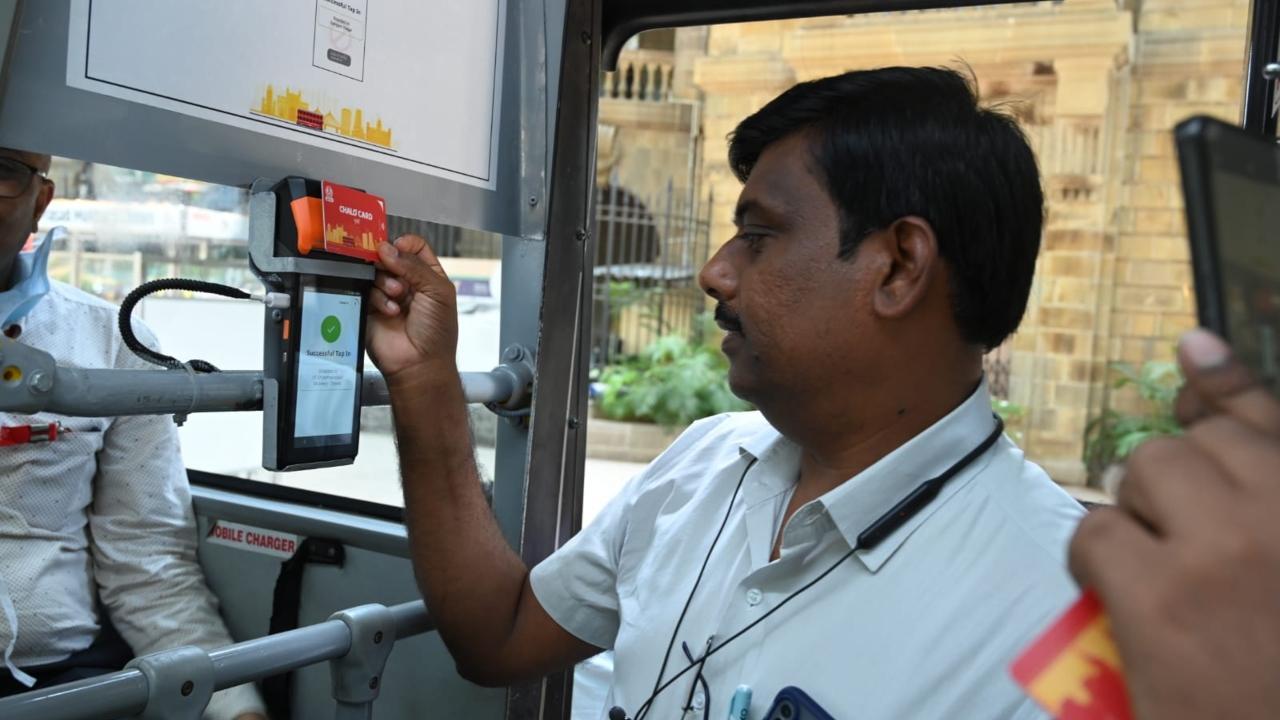 A BEST employee showing trial of 'Tap In Tap Out' service. Pic/BEST


After the successful launch of 100 per cent digital ticketing in two buses, Mumbai’s BEST will now be introducing the ‘Tap In Tap Out’ service by using Chalo smart cards and a mobile app on 12 more buses in south Mumbai from CSMT to NCPA (bus route 115).

The ‘Tap-In, Tap-Out’ service on BEST buses was started on the Churchgate to Gateway of India route on April 20. While as a pilot initiative, only two buses were offering 100 per cent digital service, according to BEST officials, 12 more buses on the 115 bus route will start functioning digitally from Monday, May 9.

Lokesh Chandra, BEST general manager, says, “Within 10 days, we received a good response from commuters who are using the digital service. More than 350 passengers, who either use smart cards or mobile 'Chalo' app, have used the service from April 20. We have now thought of changing the route where this digital service will be used. From tomorrow onwards, the two fully digital service buses will be operational on the office-goers' route from Mumbai CSMT to NCPA. Since the launch, it was operational on the Gateway of India to Churchgate route, which is mostly used by tourists. We have now thought of providing the facility on other buses which will help passengers going to office. We gradually plan to extend the initiative on buses travelling from railway stations.”

Currently, out of the two buses in which the service is functional, one is a 54-seater bus and another is a 25-seater bus. "In CSMT to NCPA route, currently there are 18 buses which are operational. Out of 18, 12 buses will be functioning in 'Tap-In, Tap-Out' service," adds Chandra.

Under the service, a passenger, after boarding the bus, will have to tap his/her mobile phone/smartcard in front of the digital machine affixed near the entrance. A green tick mark will allow the passenger to board the bus. The fare will then be deducted from the passenger’s smartcard or the mobile app after he/she de-boards by tapping out.

The passengers will have to board such buses from the front door, so that the driver can check whether the card has been tapped or not. The trial run of the service was completed on April 18.

The digital ‘Tap In Tap Out’ facility has been introduced for the first time in any public bus transport service in India. As the ticketing service will be fully digital, the passengers need not keep change with them to pay for the ticket.

Only those passengers who are using an app or smartcard for cashless payment will be allowed to travel on the bus.

Overall, out of 30 lakh passengers, over 12 lakh are availing the digital ticketing service through a mobile app while around 2.10 lakh people use the BEST smartcard.

Next Story : Hanuman Chalisa row: Court order on bail plea of Rana couple now on May 4