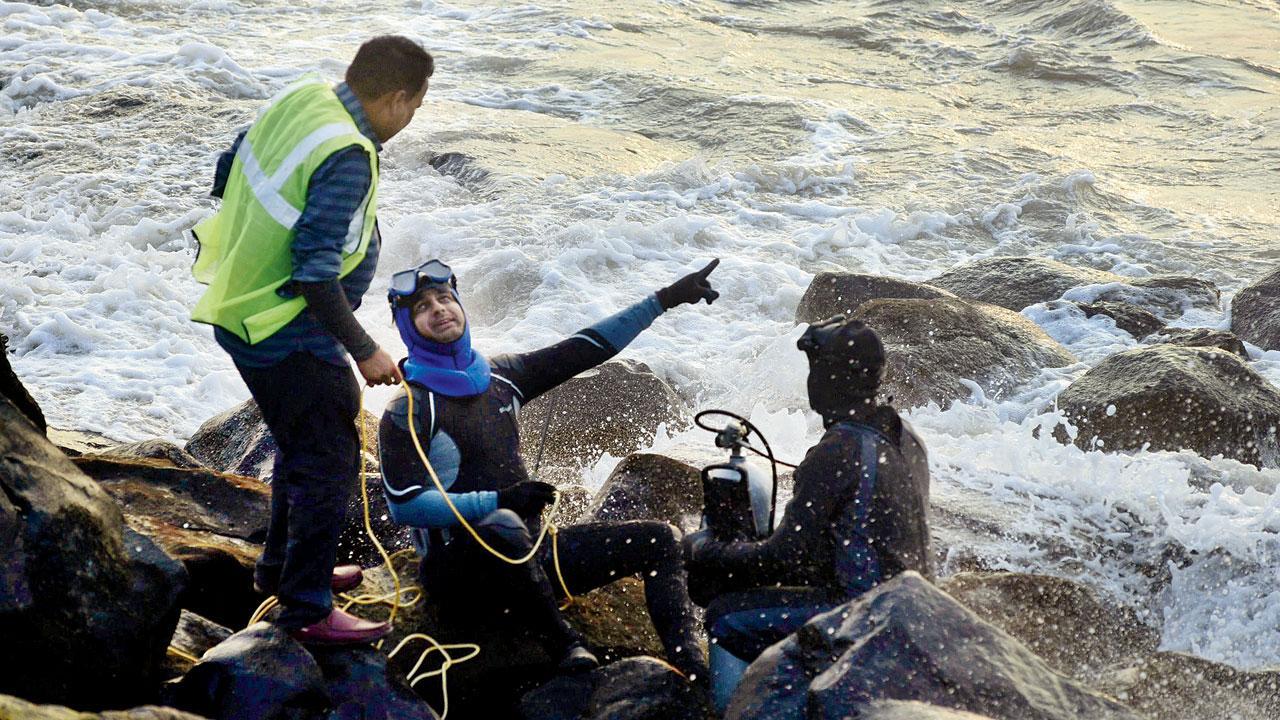 Private divers carry out a search operation for the remains of the student, in the Arabian Sea at Bandra Bandstand on Tuesday. Pic/Atul Kamble


The Mumbai Police have now roped in private divers to help look for the body of the MBBS student who went missing from Bandra Bandstand on November 29, 2021. Cops had earlier in December 2021 carried out a search operation in the sea to look for her body, but did not find anything. After arrested accused Mithu Singh recently confessed to killing the woman and dumping her body in the Arabian Sea, the cops started search operations again to find her mortal remains.

On Tuesday, two private divers, equipped with fins and cylinders, carried out an hour-long search from 5.30 pm. mid-day has learnt that the divers went 100 metres below the surface but had to return empty handed as they could not see anything due to sunset. Sources in the crime branch unit 09 said that divers would be called again on Wednesday to conduct a survey of the sea during the day.

A senior executive of the private firm which provided the divers told mid-day that they have asked the cops to conduct a hydrographic survey. Hydrographic surveys, during which machinery is used to map the area and take images of the seabed, cost around R15 lakh. A senior crime branch officer needs to approve the proposal to conduct the survey.

Also read: Mumbai Crime: Search on for body of girl who went missing from same spot in 2016, says Police

The executive added that the student’s body could be traced if other technologies, such as satellite images of the area, are used. “Satellite images can give clarity on whether the body has been dumped there or not. It will also help investigators to see backdated images/videos. These contents are crystal clear and can be used as important pieces of evidence in complex cases. However, one struggles to get satellite images in India. But since we are a US-based company, it will be easier for us to get the satellite images/videos of the spot of any particular date,” the senior executive said.

“Satellite images will be helpful to see exactly what happened that night. The perfect location of Singh and his accomplice along with the MBBS student can be retrieved. These images will help us trace the exact location where the killers dumped the body. Once it is traced, we can deploy our divers to find the body,” he added.

“We have already placed a request for satellite images and hope to get it in the next couple of days. We are planning for an extensive search operation. If the body has been dumped here, the bones and skull will be traced,” the executive said.

Crime branch officials suspect that the killer kept rocks or other heavy things inside the backpack of the MBBS student before dumping her body so that the body does not float back to the shore after getting bloated in the water.

Crime branch sources further told mid-day that Singh, who has been living in Bandstand since he was six-months old, was well aware of the nature and geography of the area. They also mentioned a January 2016 case wherein a teenager got caught in a whirlpool and drowned near Bandstand. Authorities could not retrieve her body despite extensive searches. “Since Singh was aware of the whirlpool, he chose to dispose of the body there after putting heavy weights in her backpack,” said the crime branch source.