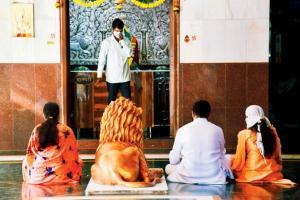 Devotees wait their turn to pray at the Mahalaxmi Temple in Thane after the state government sanctioned the reopening of places of worship earlier this week. Pic/Sameer Markande 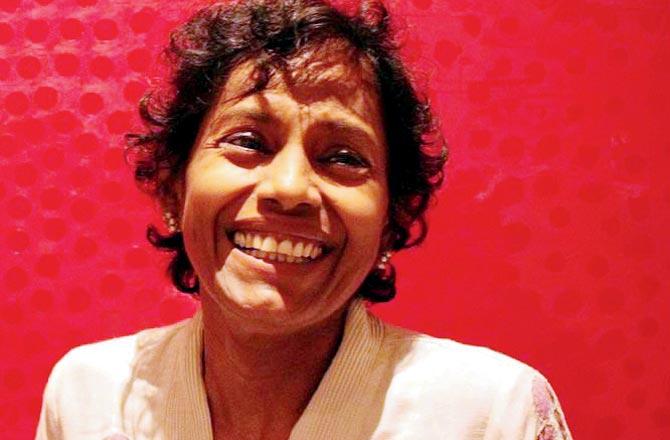 "She had a great curiosity about the world, and managed to have deep, emotional tenderness, without slipping into sentimentality," recollects poet, art critic and curator Ranjit Hoskote about artist Anjum Singh, who passed away in Delhi on Tuesday after a six-year battle with cancer. The 53-year-old was known for her works on urban ecology and environmental degradation among other themes.

About their interaction back in May 1998, Hoskote told this diarist, "We were part of a month-long Indo-Austrian art project called The Search Within in Kloster Pernegg, Bad Ischl and Vienna. That's when I got to know her. In the last decade or so, there was a real deepening of her concerns [as reflected in her work], that obviously had a lot to do with what she had been grappling with." 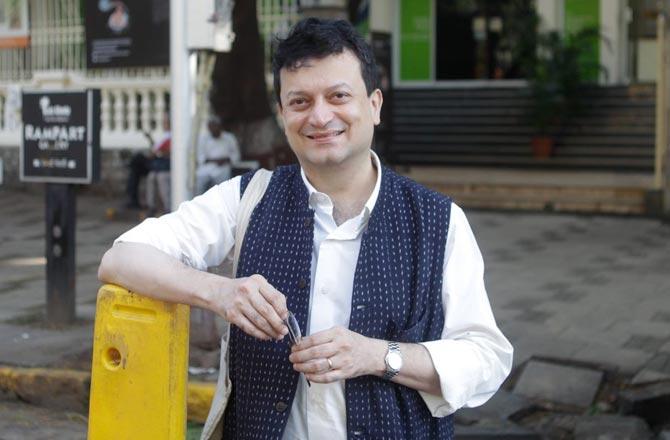 He added that it's been remarkable to see the arc of the artist's development over the years. "She remained committed to abstraction, but infused it with her other preoccupations: the environment, materiality and recycling, etc. We knew that she was ill, but it's [her demise] still such a blow; there's a deep sense that as if the artist was stopped mid-passage," he summarised. 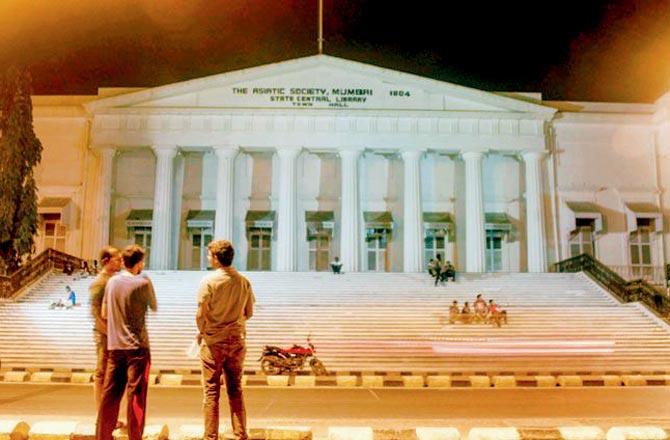 The Asiatic Society's Mumbai Research Centre is all set to host a city-themed digital festival next month. From lectures and panel discussions that discuss heritage conservation to walkthroughs of forgotten spaces, a virtual treasure hunt and the timeline of the city narrated through Hindi film songs — the three-day festival will be packed with several fun events.

As a run-up to the festival, they will also invite citizens to participate in online activities such as quizzes, haiku contests, contributing forgotten recipes and even presenting papers on the city. Speaking with this diarist, Dr Shehernaz Nalwalla, chairperson, said, "Our centre has been running events and discussions about the city for years. And there is a lot of interest in different topics surrounding it. So we wanted to take this opportunity to organise a festival for it. The funds that we raise will contribute to the Asiatic Society's conservation, digitalisation and research projects." 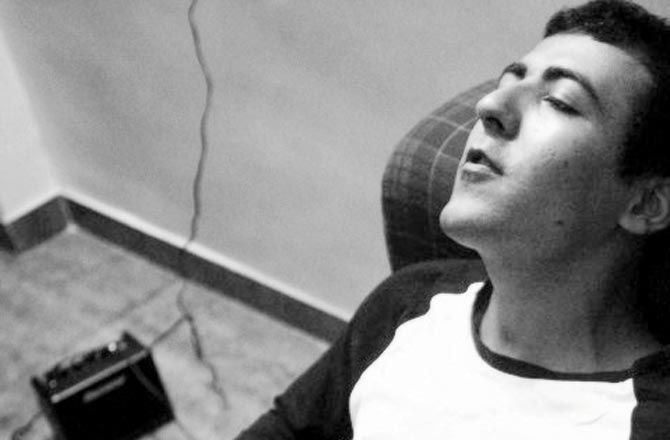 To celebrate 50 years of the musician Susmit Bose, Jaimin Rajani, a city-born singer and songwriter has released a three-volume compilation of his best songs, Then & Now, on streaming platform OK Listen. Bose, who was the first Indian solo artiste to release an original English song titled Winter Baby (1971), made songs that touched upon human rights, global peace and non-violence. 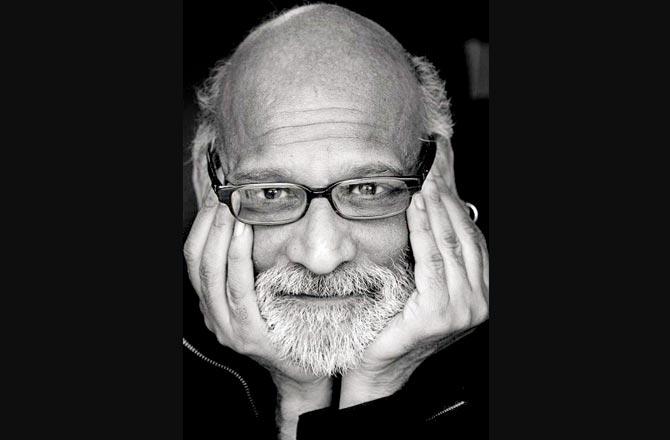 Rajani spoke about the inspiration behind the project, "When Susmit told me that he was no longer in possession of a single copy of his own debut album Train to Calcutta that was released 50 years ago, it broke my heart. He had signed and given away multiple copies to friends, family and well-wishers. When he found himself without any copies and turned to them, many of them politely turned him down. Many in possession of the vinyl claimed to be working on re-releasing it. But the project never saw the light of the day in the last decade." Rajani decided to take matters into his own hands. Within a month, several cold calls and cleaning of analogue files later, he released the compilation that includes Train to Calcutta in its entirety and Bose's contemporary music too. "We released the volume on his 70th birthday," he added. 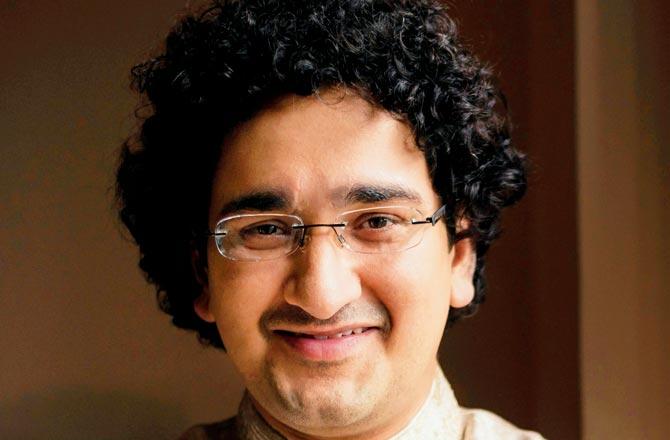 While the rise of Prime Minister Narendra Modi has ignited several titles in the past, a new book by Vinay Sitapati, author and political scientist, delves deeper into the background that set the stage for his success. It tracks the 100-year-old history of the BJP and RSS and chronicles the back story and the relationship of its founding duo — LK Advani and Atal Bihari Vajpayee. "Too many books on politics nowadays aim to agitate you, make you angry. Jugalbandi: The BJP before Modi (Penguin Viking) will instead help you understand the idea that now rules India. I conducted 200 interviews, read almost as many books, and waded through private archives, party documents, and newspapers — all to provide the reader with water-tight facts, so that s/he can make up their own mind. Whether you love or hate the BJP, this book will help you understand it," he shared about his research.

The poets are back 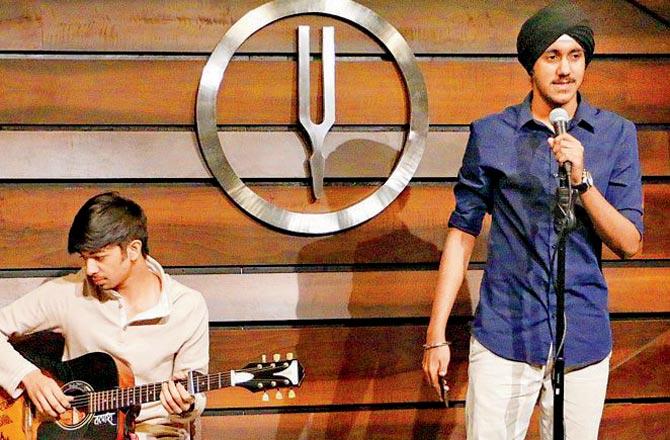 Spoken word lovers, here's some good news. The city's much-loved platform of wordsmiths, UnErase poetry will be back on stage after nine months to perform at The Habitat next week. The exciting line-up includes popular names on the spoken word scene including Amandeep Singh, Aranya Johar and Priya Malik, among others. Founder Simar Singh (in pic) confirmed the news, "We are excited to return to stage, but also nervous about how people will react or if they will turn up. Every poet will be performing new pieces since we've all written

so much in the lockdown. Apart from social issues, the poems will also speak of loneliness, isolation and long-distance relationships, among other themes. We had started from The Habitat three and a half years ago, and it feels great to be performing here again."

Next Story : Mumbai: Want academic year, but we don't want to send kids to school