In a letter to authorities, Stalin D says such fires take place every year at the spot; fire brigade says will conduct inquiry if incident report mentions suspicious activity 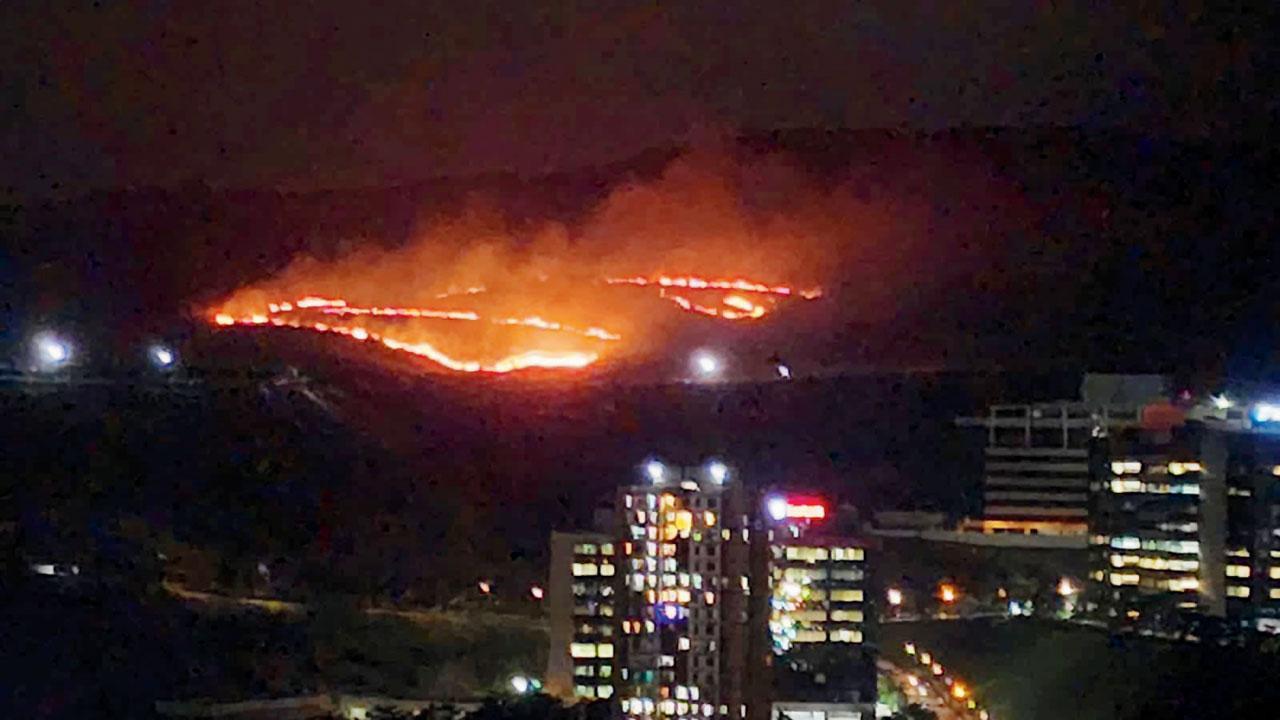 The fire was started on a private land near Santosh Nagar, Dindoshi, in Goregaon East on Tuesday


After a huge forest fire took place on a private land in Goregaon East near Santosh Nagar, Dindoshi, city-based environmentalists have alleged that the fire was deliberately set so that the land remains free of trees. Sources from the forest department told mid-day that this has become an annual event at the location. They added that such fires pose a huge threat to the biodiversity of Sanjay Gandhi National Park and Aarey Milk Colony.

The fire started around 10 pm on Tuesday and forest department officials, who reached the spot soon, learnt that it was raging on a private land. Mumbai Fire Brigade Chief Fire Officer Sanjay Manjrekar told mid-day, “We have not yet decided to investigate the fire. A decision will be taken after the incident report.”

Taking note of the forest fire, environmentalist Stalin D, who is also the director of NGO Vanashakti, has written a letter to the authorities alleging that someone is allegedly setting fire on Dindoshi hills which is leading to deforestation, alteration of the course of Oshiwara river. The letter was marked to the Brihanmumbai Municipal Corporation chief, assistant commissioner of P South ward, principal chief conservator of forest (wildlife), director of SGNP and the secretary of the Ministry of Environment, Forest and Climate Change. The NGO has also shared some pictures of the fire with their letter.

“This is to draw your attention to the massive fire that broke out at Dindoshi hills in between Aarey and SGNP. This mountain is the hills from which the Oshiwara river originates and flows down. We have been repeatedly complaining about the destruction of forests, denuding of mountains, excavations being done on this hill range…Every year forest fires are set off on this hill to kill the saplings that sprout on the land. The land is regularly shaved and deforested, the river channels diverted and excavation is undertaken. Most of the work is done at night using night lamps and labourers to kill saplings on the site,” read the letter.

Citing that the hill range has not been marked as part of the Eco-Sensitive Zone, Stalin added, “This is apparently blatant collaboration with a builder to allow destruction of forests. The ownership of ecologically important areas cannot be a reason to plunder or destroy it. We fail to understand why all your departments have turned a blind eye to this monumental environmental degradation. Year after year it is the same story of fires on this mountain. The same landowner has also chopped down hundreds of trees in close proximity to this site.”

NGO Vanashakti has also appealed to the state forest department to intervene and protect this ecologically important area. The activist said the area where the fire took place also has a rich biodiversity. A local who did not wish to be named told mid-day that this is an area with intensive wildlife movement, especially of big cats.

Honorary Wildlife Warden of Thane Pawan Sharma, who is also the president of NGO RAWW, said, “This is a man-made fire, not a natural one as our forests do not witness natural fires. The forest department is investigating the matter to find out the culprits. It is an appeal to all citizens living in high-rises which have forest views to be vigilant and report any mischievous incidents to the forest department or the nearby wildlife rescue teams so that responding teams can be alerted faster, making the response time quick leading to less loss of forests and wildlife.”

A forest department official requesting anonymity said, “The location where the fire took place is a private land adjacent to SGNP. We have observed that every year this has become a practice and we are gathering more information on the same. It appears that someone or some antisocial element is deliberately trying to destroy the green cover so that the trees on the land don’t grow. Such fires pose a huge threat to the biodiversity of SGNP and Aarey Milk Colony.”

An MFB official said, “A burning cigarette or a matchstick must have been thrown in the area and the dry grass caught fire. The fire was brought under control immediately.”

“Inquiry is initiated if any one suspects arson or there is a delay in controlling the fire or if there is a possibility that the fire was started using flammable chemicals. In this case, the fire was brought under control immediately and no one has filed a complaint yet. If our incident report finds anything suspicious, we will definitely start an inquiry,” said another official.

The fire brigade official added, “There was a fire in this area in 2018 which was brought under control after 14 hours. We had conducted a detailed inquiry at that time which ruled out any suspicious activity.”

10 pm
Approx time when the fire started on Tuesday