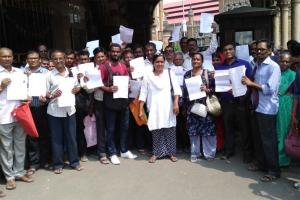 
After submitting around thousand forms on October 9, 2019, the second batch of Mahul residents reached the Brihanmumbai Municipal Corporation (BMC) headquarters in order to demand alternate homes on Monday. Residents of Mhaul have been submitting the forms to the civic body urging the BMC to give them another home after the Bombay High Court order. Residents-turned-activist claimeed that around 3000 out of the 5500 residents have submitted their forms before the covic body.

Over 1,000 Mahul residents reached the BMC headquarters on October 9 to submit forms for alternative homes. The civic body has given an allotment of 5500 homes in Mahul to project-affected people across the city. At present, there are around 3500 residents staying in homes and others are staying outside.

"Around 3000 residents of Mahul have submitted their forms in two batches, nearly 1100 on October 9, and the rest on Monday. This is an important step after the High Court order ordered the state government to give alternate accommodation to Mahul residents. The rest of the families will submit their forms in the coming days," said Anita Dhole, Mahul resident and one of the petitioners in the Bombay High Court.

The BMC has to shell out Rs 125 crores to obey the High Court order. Instead, the officers from the city are preparing to put their side before the Supreme Court. The next hearing for the case is scheduled to take place on October 29.

Next Story : Let's help the underdog fight for their sporting talents