Prakash Balu Patil, a resident of Virar, had recently bought a van and used to ferry children from home to school and back every day 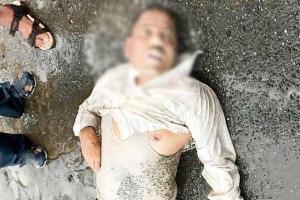 
A 40-year-old school bus driver drowned in a nullah in Virar yesterday while trying to save two schoolchildren, after the vehicle turned turtle during heavy rains. Prakash Balu Patil, a resident of Virar, had recently bought a van and used to ferry children from home to school and back every day.

On Monday, after students were let off early due to heavy rains, Patil was taking the kids home in his van when it toppled in a nullah near Narangi village due to the strong flow of rainwater.

"After his van fell in the nullah, he saw that two of the kids were drowning. Without a care for himself, he jumped out of his seat and rushed to save the children," said an officer at Arnala police station. Though he managed to save the little ones, in the process, he lost his balance and got washed away. Patil is survived by his wife, three kids and parents.

A local said, "It took a life for the Vasai-Virar Municipal Corporation to learn a lesson. Soon after the tragic incident, civic officials put up barricades around the nullah. Shouldn't they have done this earlier?"

A police officer said, "We have filed an accidental death report, and further investigation is going on." Inquiry has revealed there were seven to eight students in the van, all from Global City, Virar, and studying in Rustomjee school.