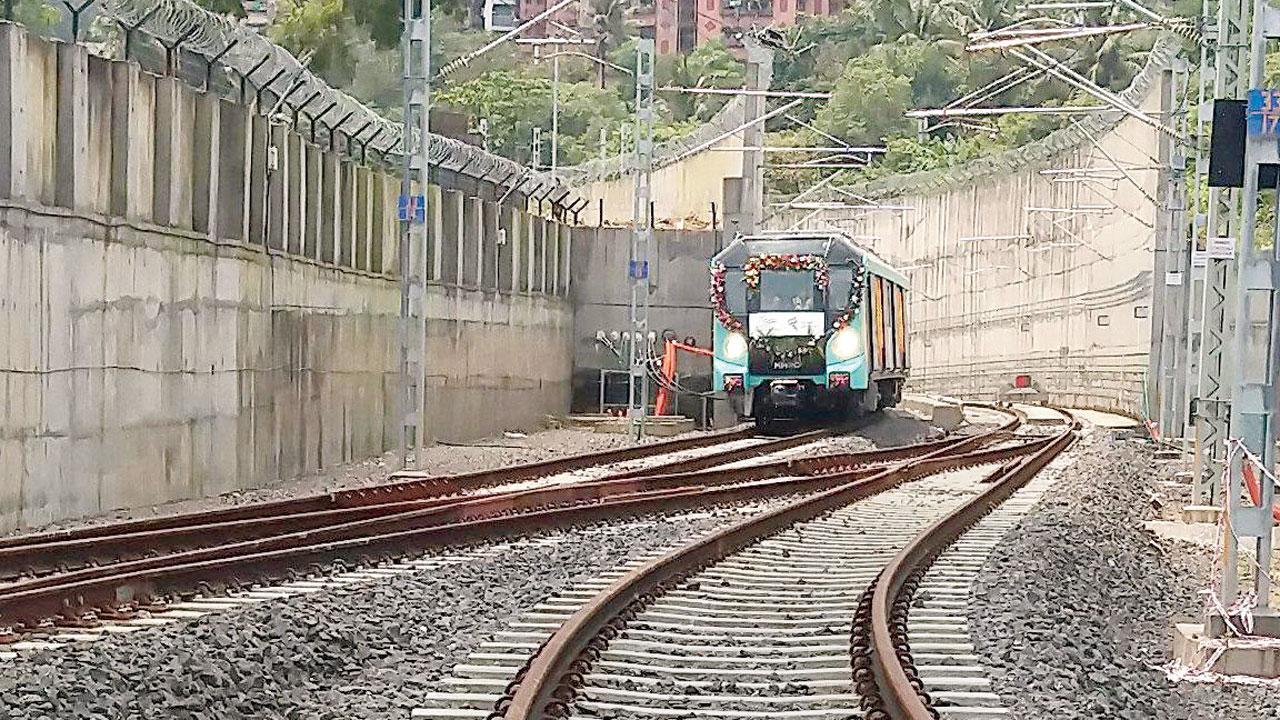 The first rake for the Metro underground Aqua Line 3, which arrived in July


The second train for the underground Aqua Line 3 of the Mumbai Metro is ready and set for dispatch from Sri City in Andhra Pradesh and will be arriving in the city in a few days. The Mumbai Metro Rail Corporation Limited (MMRCL) intends to complete the work and begin operations between Aarey and Bandra Kurla Complex for the phase I corridor by June 2023. While the first rake, which arrived in Mumbai in July, is undergoing trials, the MMRCL intends to bring all the nine rakes required to commence service on phase I between Aarey and BKC by June.

“The initial design-proving trial runs of first prototype train of about 2,000 km have been conducted in the 3-km stretch tunnel from the temporary facility to Marol Naka Metro station from August 30. The MMRCL has already conducted a 1,000-km trial run,” a senior official said.

“Speed, oscillation and emergency brake distance trials are being conducted, along with testing of other systems. The second rake is ready and set for dispatch and will arrive soon. Nine trains required for phase 1 commissioning will be made available by June 2023 and the remaining trains will arrive by May 2024,” he confirmed. MMRCL has placed orders for 31 rakes with rolling stock manufacturer Alstom for the entire 33.5-km corridor and each train will be put on trial as it arrives.

“All these rakes will be accommodated in a depot, of which 45 per cent of work is expected to be completed by December 2022. Some of the rakes can also be stabled at stations in case space availability at the depot is not ready. The depot work, which had been put on hold since October 2020, is now in progress. MMRCL has had to rework the work schedule to ensure swift completion of the depot,” he added.

For phase I, facilities will be made ready by April 2023 and in July the depot will be able to handle operations for the initial phase even though other works may continue. By July, almost all facilities will be ready except the Operation Control Centre  at the Aarey depot site. However, this will not be a hurdle as there will be a  Back-up Control Centre at BKC Metro station.

The superstructure, which is 58 metres long and four to eight metres wide,  has been completed in a record 15 days.“Metro Red Line 7 will be in service for Mumbaikars soon after the commissioner of metro rail safety’s inspection,” said Metropolitan Commissioner S V R Srinivas.

Metro operations extended by an hour

Mumbai Metro One extended train operations from Monday, November 28, 2022, by an hour in the morning, thereby reverting to the pre-COVID timetable.  Now, the first train will depart at 5.30 am from both Versova and Ghatkopar. The last train will depart from Versova and Ghatkopar at 11.20 pm and 11.45 pm respectively. As a result of this, daily trips on weekdays will increase to 380 from 366. Earlier the first train from Andheri and Ghatkopar used to depart at 6.30 am. Service frequency will remain the same, ie less than four minutes during peak hours and five to eight minutes during off-peak hours. The Mumbai Metro One’s current weekday ridership is 380,000.

Next Story : Mumbai: Pre-schools racing to keep measles at bay