Tanushree Dutta harassment case: Police has no evidence against accused

In the latest development in the Tanushree Dutta sexual harassment case, the police have not found any evidence against accused; magistrate court classifies the case as maliciously false 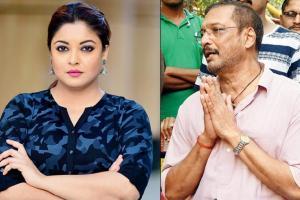 
Bollywood actor Nana Patekar can probably heave a sigh of relief as the Oshiwara Police has filed a B Summary case (where there is no evidence or prima facie case against the accused) in connection with actress Tanushree Dutta's sexual harassment case in Andheri court today. The magistrate has also classified the case as maliciously false. The definition of Summary B report is cancellation report i.e the police have not gathered any evidence against the accused to file a charge sheet and seek a trial.

Shailesh Pasalwar, senior inspector at Oshiwara police station confirmed the fresh development in the case and said, "The B Summary report has been submitted before the concerned court." Last month mid-day had reported that the 12 to 15 witnesses statement recorded in the matter does not support  Tanushree Datta's case, and the cops were completely helpless to get evidence in the matter.

"I have not received any official information from Oshiwara police station about the classification of offence (Summary Report) from police on behalf of Tanushree Dutta. If the police files any B or C classification of the summary report, it cannot be considered as the final report. We can oppose before the court and after the hearing, if the court is satisfied then again it can instruct the police to reinvestigation the case. Police acted negligently to protect Nana Patekar, many witnesses statements are not yet recorded, and the police have not investigated the case thoroughly so we are opposing summary reports and considering to file a writ petition before Bombay High Court", stated advocate Nitin Satpute. Tanushree Dutta stated she was not "surprised" and slammed the police report.

In September last year, Tanushree Dutta alleged that Nana Patekar misbehaved with her on the set of Horn Ok Pleassss in 2008 while shooting for a special dance number. A case was registered against Patekar and three others at Oshiwara police station, which include choreographer Ganesh Acharya, producer Samee Siddique and director Rakesh Sarang, under sections 354 (assault or criminal force to woman with intent to outrage her modesty) and 509 (word, gesture or act intended to insult the modesty of a woman) of the IPC.

According to sources, Oshiwara police have recorded the statements of more than 12 witnesses, including actress Daisy Shah, but none support Dutta's version of events. "The investigation is in process and at a very crucial stage," said an officer on the condition of anonymity.
Lawyer speaks: At a press meet, Dutta's lawyer Nitin Satpute said, "The cops are only recording the statements of those favouring Nana Patekar. There are four witnesses, who know the truth, but their statements are yet to be recorded. Hair Dresser Aliza , Wasim, Mir and seven other witnesses statements were not recorded. I am going to release an audio clip of one of the witnesses soon to prove how they are being pressured by Nana and his people." Satpute has also demanded a narco test of the witnesses.

Also Read: What after #MeToo? mid-day gathers an update on harassment cases