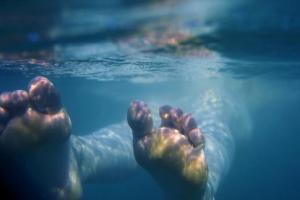 
Mumbai: A 29-year-old man drowned in the sea on Thursday afternoon, a fire brigade official said. Mitun Kumar Kariyar was spotted drowning near Bandra Bandstand, a popular tourist haunt in the western suburbs.

A fire brigade team rescued him and brought him out to the shore but he was declared dead before admission at a hospital, the official added. Incidents of people getting swept away by waves while standing on the rocks which jut into the sea at Bandra Bandstand have been reported many times in the past.

In another incident, Seven members of a family, including two minors, drowned in Ganga river while taking a bath at Brijghat in Uttar Pradesh's Amroha district, police said Tuesday.

The incident took place on Monday. Five bodies have been fished out of the river, while two remain missing, they said.

The family members were bathing at Brijghat after a 'mundan' ceremony. Two of them suddenly started to drown and the others jumped in to save them, circle officer, Dhanaura, Monika Yadav, said.

Only three of them made out alive, she said. "Two of them are still missing and a team of NDRF is trying to find the bodies," she added. District Magistrate Umesh Mishra said it is a very unfortunate incident and he has written to the state government seeking financial assistance for the family.

Top stories of the day