In the pictures that were shared by then defence minister Manohar Parrikar back then, he is seen signing the deal for 36 Rafale fighter jets 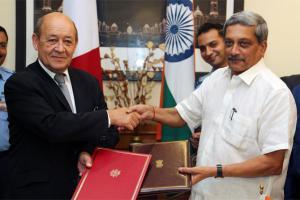 
Union Minister Smriti Irani on Wednesday took to Twitter to remember former Defence Minister and BJP leader, late Manohar Parrikar, as French Rafale fighter jets arrived in India. The first five of a batch of the Rafale fighter jets landed at the Ambala airbase in Haryana after covering a distance of nearly 7,000 km. The fighter jets will be joining the Indian Air Force fleet.

The Union Textile Minister retweeted a post of the late BJP leader Manohar Parrikar and said, "Remembering Bhai today." In the post from 2016, the late BJP leader can be seen signing the deal for 36 Rafale fighter jets with a minister from France. At the time, Parrikar was the defence minister of India from 2014 to 2017.

“May You Touch the Sky With Glory” pic.twitter.com/R4jNIIFa0n

While sharing the pictures, the late former CM of Goa had said, "Rafale will significantly improve India's strike & defence capabilities."

They hounded him for he wanted to enhance @IAF_MCC combat capacity.

The Women and Child Development minister also welcomed the arrival of Rafale fighter aircraft. Sharing a video, Irani wrote, "India welcomes Rafale! May You Touch the Sky With Glory." In another tweet, she extended a 'Thank You' note to Prime Minister Narendra Modi putting India First and strengthening the country's defence capabilities.

The Rafale fighter jets will be part of the No. 17 Squadron of the Air Force, also known as the ''Golden Arrows'. The formal induction ceremony of the aircraft would be held later.

Next Story : Cabinet renames HRD Ministry as Ministry of Education