Some laws are a burden now, reforms needed: PM 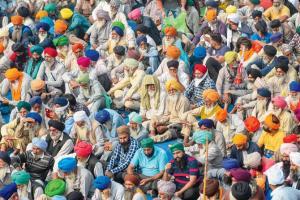 Farmers during their agitation against the Centre's new farm laws, at Singhu border in New Delhi. Pic/PTI


Amid the row over laws meant to bring a major change in the agri-marketing sector, Prime Minister Narendra Modi on Monday said reforms are needed for development and some laws from the past century have become a burden now.

Launching the Agra Metro rail project through video conference, Modi said the reforms carried out by his government are also getting reflected in election results. His pitch on the importance of reforms comes ahead of Tuesday's Bharat Bandh over the three new farm laws enacted at the Centre. But during his brief address, the PM made no direct reference to the new laws or the farmers' protests.

"Reforms are needed for development. Reforms are very much needed for a new order and to give new facilities. We cannot build the next century with the laws of the previous century," he said. "Some laws that used to be good in the past century have become a burden in the present century. Reforms should be a continuous process," he said.

Modi said his government is carrying out "holistic reforms". "Earlier, reforms used to happen in a piecemeal manner, or keeping in mind some sectors and departments," the PM said.

Transportation, essential services to be hit in Delhi

Transport facilities and supplies of essentials like vegetables and fruits are likely to be affected in New Delhi on Tuesday as various unions and associations of cab drivers and mandi traders have decided to join the Bharat Bandh strike called by farmers' unions. Some of the taxi and cab unions, including those associated with app-based aggregators, have decided to join the one-day strike.

The Confederation of All India Traders (CAIT) and All India Transport Welfare Association (AITWA) on Monday said that their members will not participate in the December 8 Bharat Bandh, adding that the government should though look into the farmers' demands and resolve the issues at the earliest. Both associations said in a joint statement that their members in commercial markets across the country will open their premises and conduct business as usual and run normal transport services today.

Next Story : FIR lodged against Akhilesh Yadav, 28 others