No major glitches in electronic voting machines were reported and the voting passed off peacefully with high security observed at the 3,360 critical booths in 493 locations where more than 25,000 police personnel, nearly 13,000 home guards and 100 companies of paramilitary forces were deployed 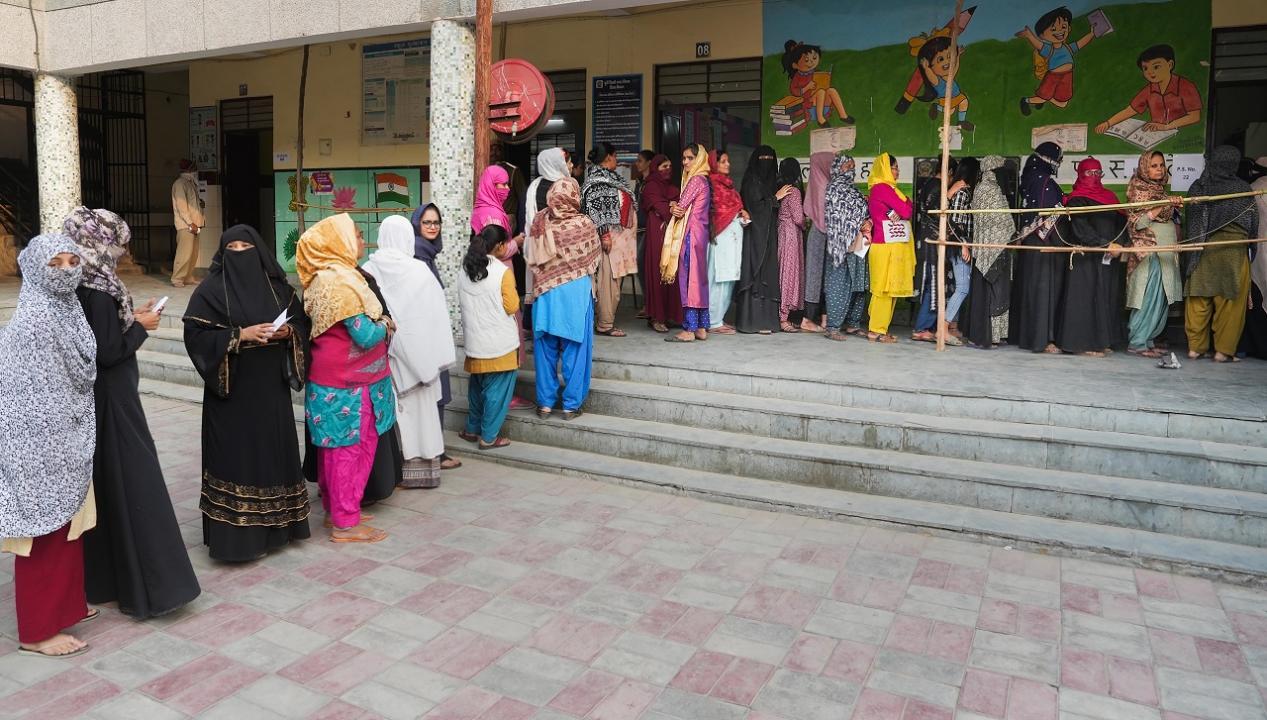 Voters wait to cast their votes for the MCD elections, at a polling station, in East Delhi. Pic/PTI


Around 50 per cent voting was recorded on Sunday in the election to the 250 municipal wards in Delhi, with main rivals BJP and AAP claiming victory in the high-stakes contest.

No major glitches in electronic voting machines were reported and the voting passed off peacefully with high security observed at the 3,360 critical booths in 493 locations where more than 25,000 police personnel, nearly 13,000 home guards and 100 companies of paramilitary forces were deployed, officials said.

Several people in North-East Delhi and some other areas complained that their names were missing from the voters' lists. Anil Kumar, the Delhi Congress president, was among the people who could not vote. The BJP said it has filed a complaint with the state election commission over the missing names.

Election officials said that nearly 50 per cent polling was reported by 5.30 pm when the voting time ended. However, the figure is likely to rise as many people who reported before 5.30 pm and were queued up at the polling booths were casting their votes.

The results will be announced on December 7.

Garbage collection and landfills emerged as one of the biggest issues in the fight between the Arvind Kejriwal-led Aam Aadmi Party (AAP) and the BJP, which has been controlling municipal bodies for 15 years.

The polls are crucial for the AAP and its leader Arvind Kejriwal as they seek expansion of the party ahead of 2024 general elections in the country.

A victory in the MCD polls will not only cement AAP's place in Delhi but will fuel its aspiration to emerge as a serious contender to the BJP and Prime Minister Narendra Modi on the national scene.

The BJP, which had deployed its top leaders, including national president JP Nadda, 19 Union ministers like Rajnath Singh, Nitin Gadkari and Piyush Goyal and chief ministers of six states in the campaign, is also seeking redemption through a morale-boosting victory.

The party received a drubbing at the hands of AAP in the 2020 Delhi Assembly polls and won just eight of the 70 seats.

With a unified MCD led by a mayor of the party, the BJP can continue to challenge the AAP and Kejriwal in the national capital's politics.

There were 1,349 candidates in the fray and over 1.45 crore electors were eligible to exercise their franchise.

Earlier in the day, Kejriwal urged people to exercise their franchise for setting up an honest establishment in the Municipal Corporation of Delhi that delivers results.

"People should vote for the party that is honest and works. (Vote) For those who focus on the cleanliness of the city and not those who keep creating hurdles," Kejriwal told reporters after he cast his vote along with his parents, wife and children at a polling booth in Civil Lines here.
Delhi BJP president Adesh Gupta asserted that the BJP is returning to power with a clear majority in the MCD for the fourth time in a row.

"People have voted against the scams and false publicity of the Kejriwal government," Gupta said.

The Congress, which has suffered back-to-back defeats in the national capital since 2015 in parliamentary, assembly and municipal corporations polls, is hoping to return from the wilderness.

Meanwhile, several voters were disappointed after their names were missing from the voters' list.

"I came here to cast my vote for the first time. I found that my name is not mentioned in the list. Officials don't have a clue. I am standing for the past few hours but nobody is helping me," 19-year-old Puneet Kumar said.

Anil Kumar, the Delhi Congress president, also did not find his name on the list.

"My name is neither on the voters' list nor on the deleted list. My wife has voted," Kumar said at a polling booth in Dallupura in East Delhi.

Polling booths in Bawana's Katewara village were all empty as the residents in the area boycotted elections alleging negligence from the civic body.

One of the residents of Katewara village Krishna Vats claimed that the residents unanimously decided to boycott the elections at the polling booths in Nangal Thakran ward.

"The civic body as well as the Delhi government always neglected people here, so why should we cast our votes? Main roads are broken, drains are clogged and MCD schools are in pathetic conditions here," Vats told PTI.

Sanitation, maintenance of parks and lack of parking facilities were the issues of concern for women who came out to vote.

Dr Rehana Parveen, a general physician who arrived at a pink booth on DDU Marg here to cast her vote, flagged the issue of garbage collection from colonies.

Among the early voters was 106-year-old Shanti Bala Vaidya at the Deputy Ganj polling station in the Bara Hindu Rao area.

"She has not missed an election since she started voting," said her daughter Kamla. Vaidya (106) only understands Bengali but cannot talk.

Sixty drones were used especially to maintain law and order in critical or sensitive booths of the national capital.

Meanwhile, the BJP and the Aam Aadmi Party accused each other of violating the model code of conduct during voting.

Delhi BJP spokesperson Praveen Shankar Kapoor alleged that recorded messages of Chief Minister Arvind Kejriwal appealing to people to vote for the AAP were received by lakhs of people on the day of polling. No immediate reaction was available from the Aam Aadmi Party.

AAP MLA Dilip Pandey told reporters that people are going to punish the BJP for its 15 years of misrule of the civic bodies. and Tiwari should "stop crying foul".

The erstwhile MCD, established in 1958, was trifurcated in 2012 during Sheila Dikshit's tenure as chief minister.

Between 2012 and 2022, Delhi had 272 wards and three corporations -- North Delhi, South Delhi and East Delhi municipal corporations. These three civic bodies were reunified into the Municipal Corporation of Delhi which came into existence on May 22.

In the 2017 civic election, the BJP won 181 of the 270 wards. Polling could not be held on two seats due to the death of candidates. The AAP had won 48 wards and the Congress 27. The voting percentage that year was around 53 per cent.

Next Story : Voting in bypolls to one Lok Sabha, seven assembly seats on Monday