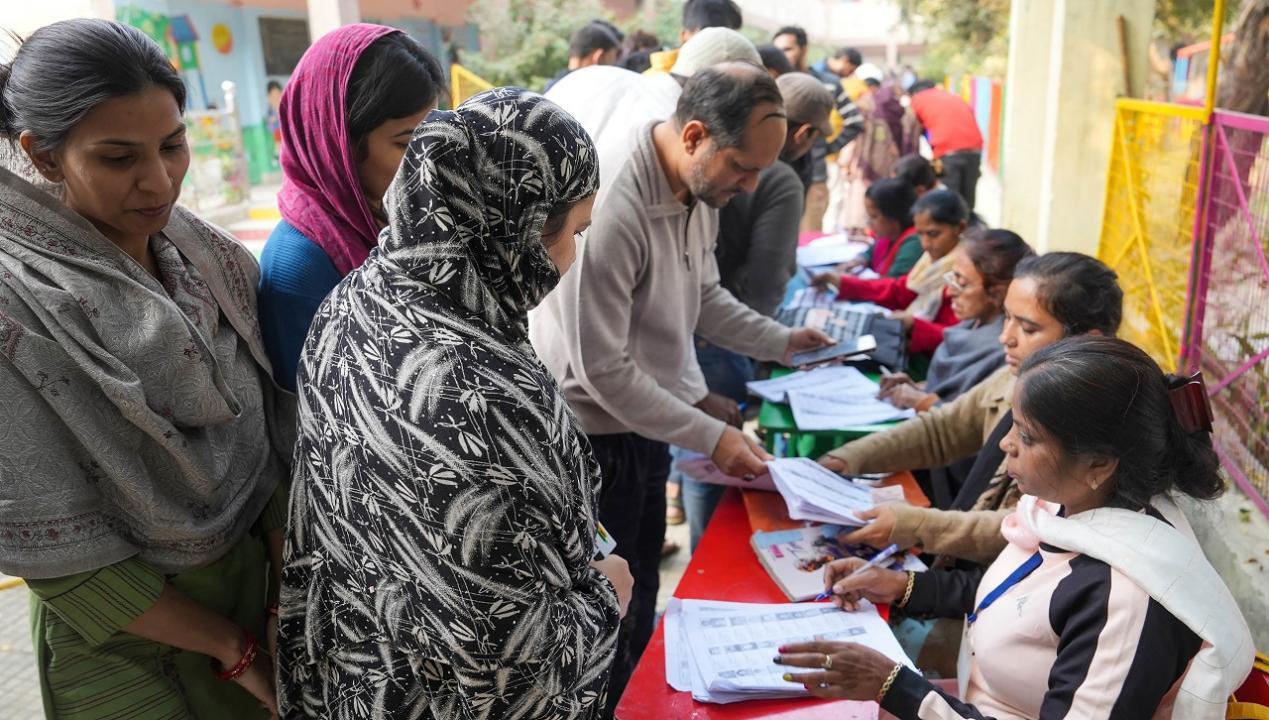 Polling agents look for the names of the people in a list as they come to cast their votes for the MCD elections. Pic/PTI


The BJP and the Aam Aadmi Party accused each other of violating model code of conduct during voting in municipal polls in Delhi on Sunday.

Delhi BJP spokesperson Praveen Shankar Kapoor alleged that recorded messages of Chief Minister Arvind Kejriwal appealing people to vote for the AAP were received by lakhs of people on the day of polling. He said it was a violation of model code of conduct and lodged a complaint with the State Election Commission.

In his complaint, Delhi BJP's Legal cell co-convener sanket Gupta alleged that both Pathak and Garg violated model code of conduct by campaigning on the night of December 3 which was "silence period" before voting.

The complaint also cited a viral social media video of the two AAP leaders allegedly campaigning. The party demanded the Election Commission to direct police to register an FIR against Pathak and Garg.

No reaction was available from the Aam Aadmi Party(AAP) over the BJP's allegations despite repeated efforts to reach its leaders.

North East Delhi MP Manoj Tiwari also alleged that names of hundreds of voters in Yamuna Vihar and other parts of his North East Delhi constituency were deleted at the behest of AAP government.

"I talked to the State Election Commissioner Vijay Dev and lodged my complaint with him. We will demand cancellation of polls in these area, if needed," Tiwari told reporters.

AAP MLA Dilip Pandey told reporters people are going to punish the BJP for its 15 years' misrule of the civic bodies. and Tiwari should "stop crying foul".

"The SHO of Ambedkar Nagar police station checked the complaint by visiting the place referred by the AAP candidate. One person was found there but he was not worker of any party. The enquiry revealed that the complaint was bogus," said a police officer.

The voting for 250 wards of Municipal Corporation of Delhi (MCD) concluded on Sunday evening. Results of the elections will be declared after counting of votes on Wednesday.

A total of 1.45 crore voters ARE eligible to cast vote in the MCD polls. The voting percentage was approximately 45 till 4 PM. The voting concluded at 5.30 pm and the final figures were awaited.

This year, the three municipal corporations were unified into MCD and the number of wards were reduced to 250.