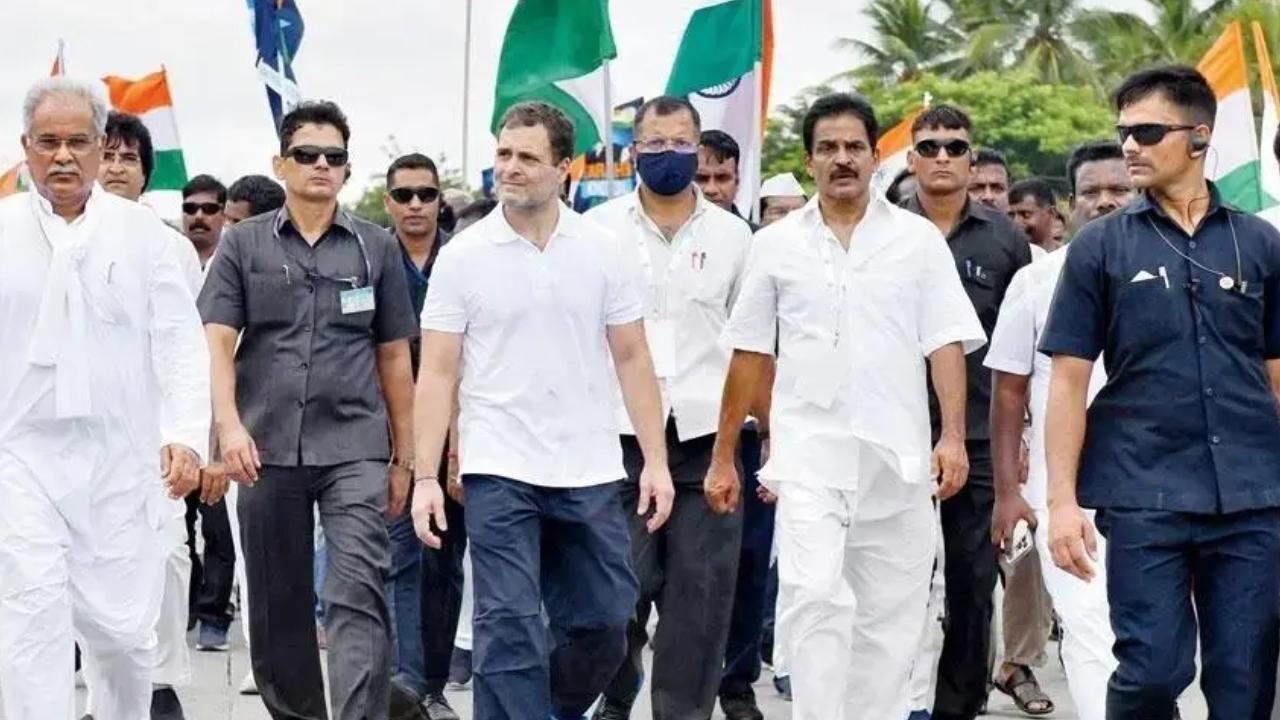 
Congress leader Rahul Gandhi on Tuesday said demonetisation and the Goods and Services Tax rollout by the Centre broke the backbone of the common people, especially small traders.

Rahul Gandhi was addressing a public meeting in Ujjain attended by a large number of people after taking the darshan of Lord Mahakal in Ujjain as the Bharat Jodo Yatra led by him continued its onward journey in Madhya Pradesh.

"Demonetisation (implemented in 2016) and GST broke the backbone of the people, especially those doing small businesses. We have to rebuild it, unite it, and then only we will be able to provide employment to the people," he said.

The Congress MP said labourers who walked long distances during the Covid-19 lockdowns, farmers, and small traders are the "real tapasvis" and not him.

"I have not done any tapasya (penance) by marching in Bharat Jodo Yatra. Labourers who walked long distances during COVID-19 lockdowns, farmers who are producing foodgrains for the people, and small traders are the real 'tapasvis' of the country," he said.

The GST and demonetisation stopped the cash flow in hands of small-scale traders as they are not able to sustain without cash beyond a fortnight or a maximum a month or two unlike big traders, he said.

Unfortunately, they are not getting their dues whereas only 4-5 industrialists are being benefited, he alleged.

As per the Hindu religion "tapasvis" should be worshipped, but unfortunately, only 4-5 persons are being taken care of as they worship PM Modi., Gandhi said.

"Farmers used to pay to companies for crop insurance but when they need compensation during a natural calamity they can't get the phone numbers and addresses of these organisations even on the Internet," the former Congress president said.

He said farmers who met him during the pan-India Yatra complained about the shortage of fertilisers and the availability of expensive stock.

"Small shop owners and traders provide employment to a large number of people in the country, but their hard work is not recognized. The money is snatched from their pockets and given in the hands of the 4-5 industrialists," Gandhi said.

He said labourers, farmers, small traders and youths are working hard but they are not getting their dues because "they are not worshipping Prime Minister Narendra Modi".

"There are 4-5 persons who are worshipping Modi and (in return) they are getting all they want including airports, ports, railways, roads, power, and water as he is taking care of them only," the Congress leader alleged.

Referring to the VYAPAM scam in Madhya Pradesh, Gandhi said such frauds deprived youths of employment despite studying hard.

The "VYAPAM" scam, known by its Hindi acronym of the Madhya Pradesh Professional Examination Board, involved alleged malpractices in the entrance examination, admissions and recruitment.

"Media wanted to show reality to the people but they are unable to do so because their hands are tied. Their reins are in the hands of those 4-5 persons who are Modi, worshippers," he added.

Gandhi said the Yatra is not a Congress campaign "but it is representative of Hindustan, farmers, small scale businessman, labourers, brothers and sisters, mothers, youths, journalists, and others".

"Never forget that this country is of tapasvis (ascetics) and Hindu religion is also of tapasvis," he added.

Addressing the meeting, Madhya Pradesh Congress president Kamal Nath alleged the state is number one in unemployment, crime and atrocities against women, and corruption.