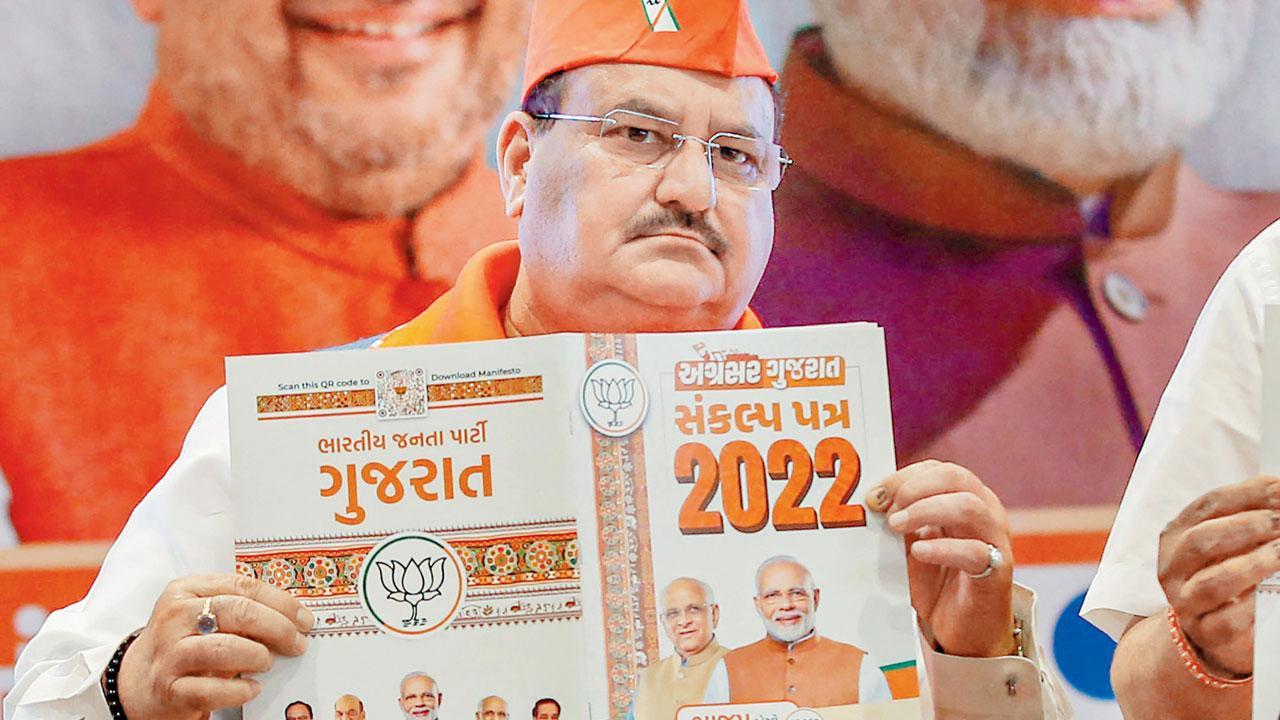 
The ruling Bharatiya Janata Party on Saturday released its manifesto for the Gujarat Assembly elections, which promised to implement the Uniform Civil Code (UCC) and set up an ‘anti-radicalisation cell’ to identify and eliminate terror threats. It also promised to conduct surveys of madrassas and scrutinise the assets of the Waqf Board.

The manifesto was released at the state BJP headquarters by party president JP Nadda in the presence of Gujarat Chief Minister Bhupendra Patel and state unit chief CR Paatil.

“We will ensure complete implementation of UCC in Gujarat as per recommendations of a state government committee. We will also create an anti-radicalisation cell to identify and eliminate potential threats and sleeper cells of terrorist organisations and anti-India forces,” said Nadda. As per the manifesto, a task force will be created to scrutinise the assets and finances of the Waqf Board, and surveys of madrassas (Islamic seminaries) would be conducted regarding their curriculum.

Other promises in the document included creation of “20 lakh employment opportunities” and taking the state’s economy to $1 trillion in the next five years. More than one lakh government jobs will be created for women over the next five years, it said. The annual cover for a family under the Pradhan Mantri Jan Arogya Yojana (Ayushman Bharat) would be doubled from Rs 5 lakh to Rs 10 lakh and girls will get free education from “KG to PG” (kindergarten to post-graduation), it said.

The manifesto also promised to start the ‘Mukhyamantri Sharanarthi Yojana’ for the welfare of refugees in Gujarat who have been given citizenship under the Citizenship Amendment Act. Under this scheme, a direct benefit transfer of Rs 10,000 per year will be made to each refugee family for five years after they have received citizenship.

The BJP also promised to establish four Gujarat Institutes of Technology on the lines of the Indian Institutes of Technology (IITs) and set up 100 ‘Annapurna canteens’ across the state that will provide meals for R5 three times a day. Talking about farmers, Nadda said the BJP, if voted to power, will spend R10,000 crore for the overall development of APMCs, mandis, sorting and grading units, cold chains, warehouses and processing centres, while R25,000 crore will be spent to strengthen the irrigation network.

“We will build a Devbhumi Dwarka Corridor to develop it as western India’s biggest spiritual centre. It will have the world’s tallest Sri Krishna statue, 3D immersive Bhagvat Gita zone and a viewing gallery for the lost city of Dwarka,” the manifesto stated. The BJP also promised to invest R1,000 crore to renovate, expand and promote temples on the lines of the Somnath Ambaji and Pavagadh temples.

The state will have two-phase Assembly polls on December 1 and 5, while votes will be counted on December 8. It is witnessing a three-cornered fight with the BJP, Congress and AAP in the fray.

Next Story : CAA will be implemented in West Bengal: BJP's Suvendu Adhikari