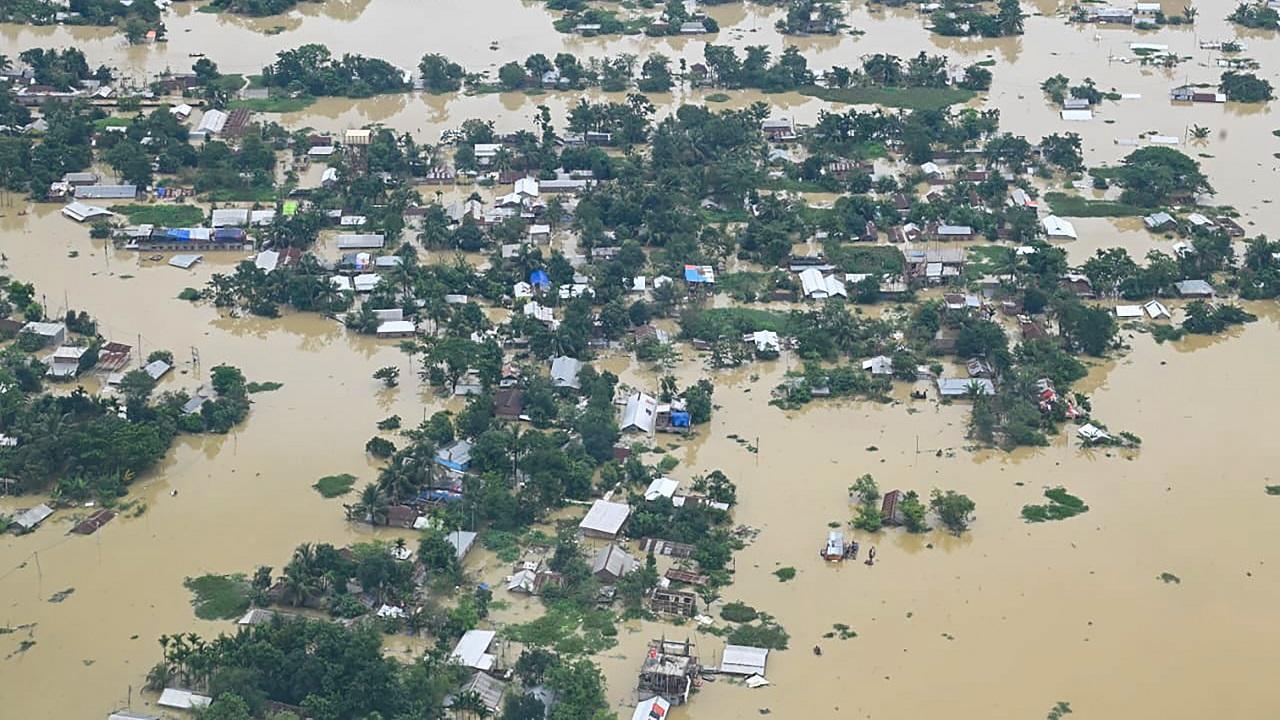 Aerial view of the flood-affected area in Assam. Pic/PTI


Indian Air Force (IAF) is conducting flood relief operations in Assam and Meghalaya, and has rescued 253 stranded persons since June 21.

Since then, the IAF has flown around 74 missions, rescued 253 stranded persons and dropped more than 200 tonnes of relief material as part of the humanitarian assistance and disaster relief operation, conducted in aid to the civil administration of the affected areas, according to the IAF.

Operations are under progress in coordination with the civil administration.

The overall flood situation in Assam has improved but over 33.03 lakh people in 28 districts continue to remain affected due to the natural calamity in the state, the Assam State Disaster Management Authority (ASDMA) informed on Saturday.

According to ASDMA, a total of 117 people have lost their lives so far in the flood and landslides in the state this year; of which 100 people died in flood alone, while the remaining 17 died due to landslides.

As per the reports, at least 10 people, including four children died after drowning in the flood water in the last 24 hours.

Notably, 3,510 villages under 93 revenue circles of the state and nearly 91,700 hectares of cropland is still reeling under the flood water.

2,65,788 people affected by flood water are still lodged in 717 relief camps set up by the administration of 22 districts in the state, ASDMA reported.

Two drones have been deployed in Silchar of Cachar district for carrying out the flood inundation mapping as well as to provide the relief materials in the inaccessible areas.

85.2 MT of GR items including packaged drinking water, rice, etc. have been air transported from Guwahati and Jorhat to Silchar.

The National Disaster Response Force (NDRF) personnel along with SDRF, Fire and Emergency personnel, Police Force and AAPDA MITRA Volunteers have been helping the district administrations in the rescue operation and relief distributions.

However, the ASDMA earlier reported that many areas under the Raha revenue circle in the Nagaon district are still under flood waters.

Nearly 1.42 lakh people of 155 villages under the Raha revenue circle have been affected by the current wave of floods.

In the Nagaon district, children have participated in preschool activities in the relief camp itself.

The flood situation in Kampur area in Assam's Nagaon district has slightly improved, but many areas under Kampur revenue circle are still under flood waters.