According to the police, stone-pelting incidents were reported at various places in the state during the protest. Visuals showed the protestors pelting stones at the Kerala State Transport Corporation (KSRTC) bus at Panamaram village in Wayanad district 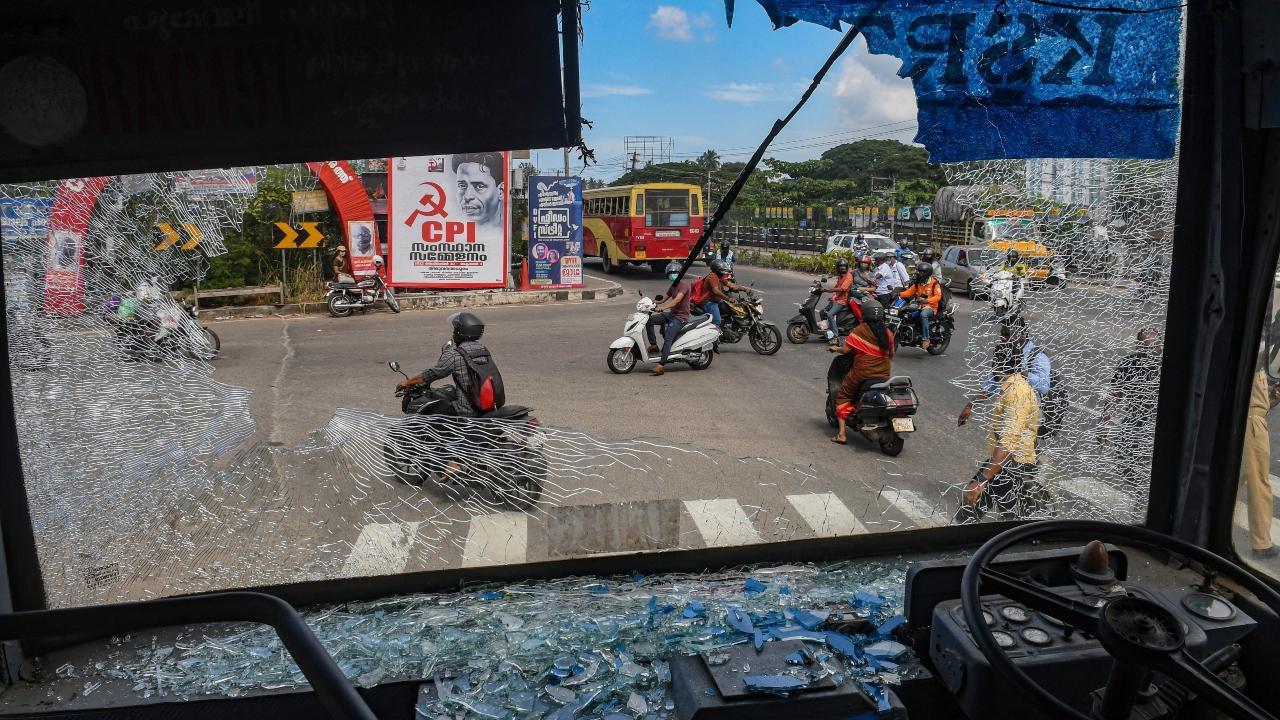 Broken windshield of a Kerala State Road Transport Corporation bus after some miscreants threw stones on it in Thiruvananthapuram. Pic/ PTI


As many as 500 people were arrested and 400 others put under preventive detention on Friday in connection with violent protests during the twelve-hour strike called by PFI to protest the arrest of the organisation's leaders.

Additional Director General of Police (ADGP), Law and Order, Vijay Sakhare told ANI that 500 people had been arrested so far in connection with the protests.

The ADGP also gave details of another incident where arrests were made for carrying an explosive device.

"In another case, two persons on motorcycle with a bomb were arrested. Three more people were arrested later. All the five have been arrested. Currently, the situation is normal and under control," Sakhare said.

Earlier in the day, a petrol bomb was also hurled at the RSS office in Mattannur during the protest against the arrest of the PFI activists. According to reports, two persons on a scooter hurled a petrol bomb at the Sangh office which resulted in the shattering of window panes.

A day after PFI leaders were arrested in massive nationwide raids by the National Investigation Agency (NIA) and other agencies, the controversial organisation had called for a dawn-to dusk shutdown on Friday.

The hartal (strike) started at 6 am and would continue for 12 hours till 6 pm, informed a protester.

According to the police, stone-pelting incidents were reported at various places in the state during the protest. Visuals showed the protestors pelting stones at the Kerala State Transport Corporation (KSRTC) bus at Panamaram village in Wayanad district.

The bus was going to Kozhikode. KSRTC buses were also attacked in Kozhikode, Kochi, Alappuzha and Kollam.

"Two miscreants on a bike at Pallimukku in the Kollam district abused police officials and hit them after they attempted to stop them," police said.

The injured police officials identified as Antony and Nikhil have been admitted to the hospital. The police said the accused will soon be taken into custody.

In the state capital of Thiruvananthapuram, an auto rickshaw and a car were seen in a damaged state after being attacked in Poonthura. In Kottayam, roads were seen deserted.

A total of 106 Popular Front of India (PFI) cadres were arrested yesterday in a joint operation conducted by the National Investigation Agency, Enforcement Directorate and state police forces across 15 states in the country's multiple locations, according to the sources.