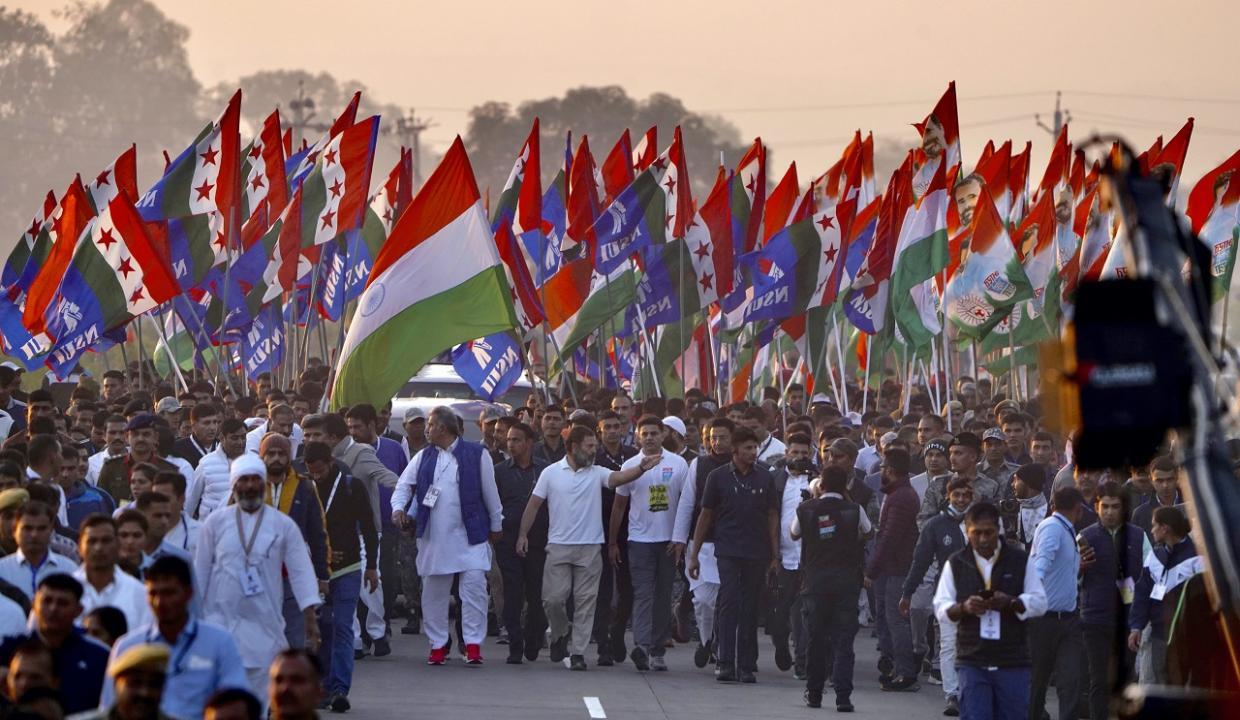 
Congress leader Rahul Gandhi was given a rousing welcome here on Thursday during the first leg of the Bharat Jodo Yatra in Rajasthan.

On the 92nd day of the march the Gandhi scion walked a 24 km stretch in one go.

The yatra began from Suryamukhi Hanuman temple, Jagpura in Kota at 6 am and after a march of 24 kilometres, it was concluded in Bhadana village for a day's break.

It will resume on December 10.

Gandhi marched through the road with Chief Minister Ashok Gehlot and his former deputy Sachin Pilot on either side.

Thousands of people gathered on both sides of the road and on the rooftops of the houses along the route to witness the march.

Groups of people, folk artists, who reached Kota to catch a glimpse of Gandhi and greet him were noticed at several spots on the route, which was decked up with hoardings, banners and posters of the Wayanad MP and other party leaders.

"It was a great grand welcome to Rahul Gandhi and Bharat Jodo Yatra by party workers and people. No other leader has never ever received such a grand welcome here," UDH minister and MLA from Kota (North) Shanti Dhariwal told reporters.

"See the sacrifice of Rahul Gandhi, has anyone marched for 3,700 kilometers since the Independence?" Dhariwal asked.

"It was grand and rousing welcome by party workers as well as people, who were also on rooftops waving hands to Gandhi and Rahul Gandhi and Padyatris witnessed the development works by Dhariwal in the city," BJY's state co-coordinator, Kapil Yadav said.

The yatra will cover about 500 km in Rajasthan by passing through Jhalawar, Kota, Bundi, Sawai Madhopur, Dausa and Alwar districts over 17 days before entering Haryana on December 21.

The march that started from Kanyakumari in Tamil Nadu on September 7 has so far covered Tamil Nadu, Kerala, Andhra Pradesh, Karnataka, and Telangana before traversing through Maharashtra and Madhya Pradesh.