After being in ED custody till August 5 following their arrest on July 23, Chatterjee and Mukherjee had been sent to judicial remand by the PMLA (Prevention of Money Laundering Act) court 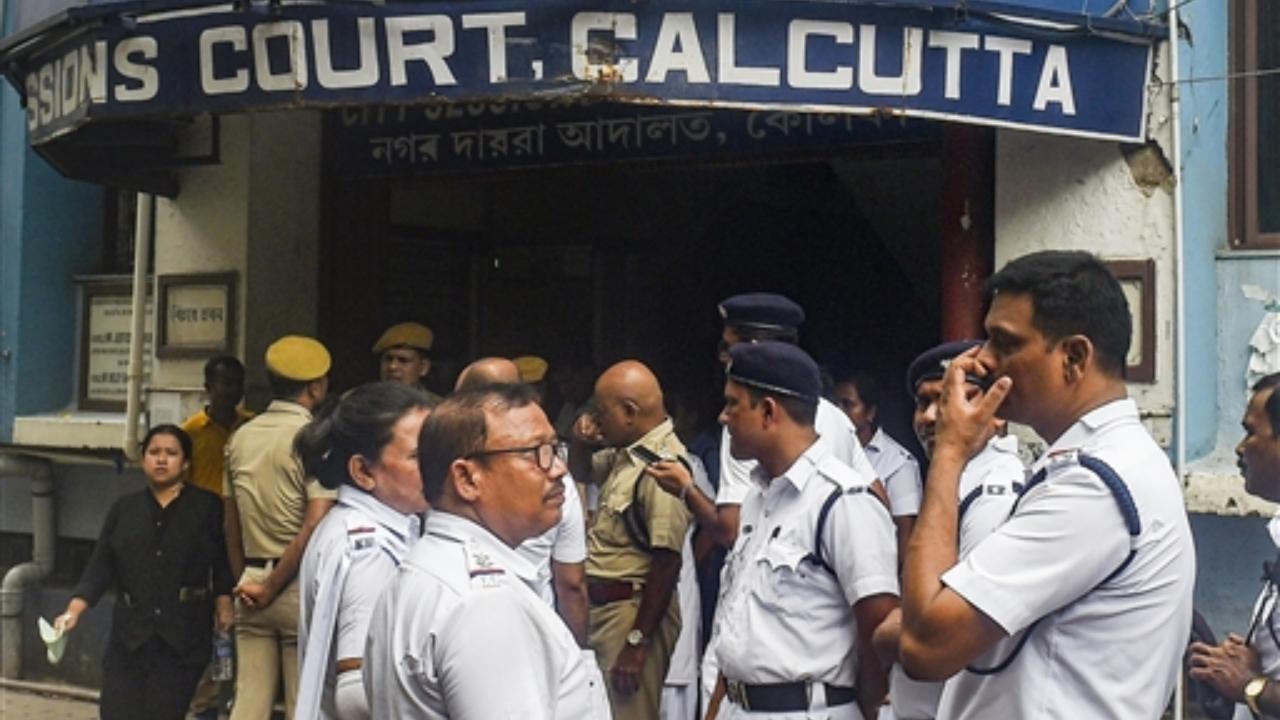 Police personnel deployed outside the court, where former WB minister Partha Chatterjee is being produced in connection with the teachers' recruitment scam case, in Kolkata. Pic/PTI


A special court on Thursday extended the judicial remand of former West Bengal minister Partha Chatterjee and his alleged close aide Arpita Mukherjee, both arrested by the Enforcement Directorate in the school jobs scam, by 14 more days.

After being in ED custody till August 5 following their arrest on July 23, Chatterjee and Mukherjee had been sent to judicial remand by the PMLA (Prevention of Money Laundering Act) court here.

Rejecting a bail prayer of the former minister, Judge Jibon Kumar Sadhu granted 14 days' judicial remand of the two accused on a prayer by the ED till August 31.

On a prayer by the central investigating agency, the court granted permission to the ED to further interrogate them in the correctional homes they are lodged in.
Mukherjee did not make any bail prayer before the court on Thursday.

Chatterjee and Mukherjee were arrested by the ED on July 23 in connection with its probe into the money trail in illegal appointments of teaching and non-teaching staff in West Bengal government-sponsored and -aided schools.

The ED has claimed to have recovered Rs 49.80 crore, jewellery and gold bars from flats owned by Mukherjee, Chatterjee's alleged close associate, and documents of properties and a company in joint holdings.

Chatterjee has been relieved of his ministerial duties by the Mamata Banerjee government, while the Trinamool Congress has also removed him from all posts he held in the party following his arrest.

Claiming that 70-year-old Chatterjee suffers from chronic illnesses and needs active medical intervention, his lawyer prayed for his bail on any condition.

The public prosecutor appearing for the ED claimed that Chatterjee and Mukherjee are involved in a criminal conspiracy for illegally giving jobs for the post of teachers and money recovered from her flats were proceeds of crime.

He also claimed that seized documents reveal a close association of Mukherjee with family members of the former minister through a company named Ananta Texfab Pvt Ltd and the address of it is a flat at Belghoria in the northern outskirts of Kolkata, from where cash amounting to Rs 27.90 crore was seized.

It was alleged that Chatterjee and Mukherjee entered into a partnership of equal share vide a partnership deed in November 2012 to form a company named APA Utility Services.

Opposing the bail prayer, the ED counsel submitted that Chatterjee is an influential person as he is a sitting MLA and may influence witnesses in the case.

Observing that the allegations against the accused are very serious, the judge rejected Chatterjee's bail prayer.