AAP-le of the Delhi eye

It is party time for Arvind Kejriwal & Co. with the winners now aspiring to do a Delhi in the local Mumbai and Navi Mumbai elections 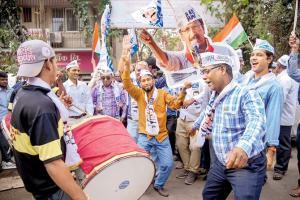 The Bharatiya Janata Party (BJP) spokesperson, Shaina NC said, "We truly respect the mandate of the people, this is a democracy and the people have spoken.

Unfortunately the wrong narrative being spun that the BJP was only about communalism seems to have resonated with the people."

When asked about the winning gambit, Kejriwal concentrating on development while BJP had its eye on the anti-CAA protests at Shaheen Bagh, Shaina shot back, "Who created Shaheen Bagh? It is not the BJP who was giving the protesters R500 a day and feeding them biryani. In fact, it is the BJP who stepped in to ensure that law and order is maintained in the space," said the Mumbai spokesperson, who was on the campaign trail with the BJP during the election run-up.

She added, "The CAA is not against any citizen, it is a check against infiltrators, we must be very clear about that. The AAP claimed they had opened 500 schools, but, where are these schools? Where are the 20 colleges? Where are the 15 lakh cameras? Everything about AAP was free, free, free, but we can only hope that it now fulfils the aspirations of the people of Delhi."

Mumbai's Abhishek Bhat, an AAP volunteer, also on the campaign trail in recent weeks said, "We could afford to give certain basics free to people but there is no debt to the state government, our budget has swelled from R30,000 crore to R60,000 crore, which is mainly GST money. It shows there is consumption is Delhi, the economy is doing well, people are spending, people are buying. Compare this to the BMC revenue that has gone down drastically in Mumbai."

Bhat said this particular populist model has worked. "You give people good education, healthcare and very basic electricity, and you have a welfare model, which works a little like the Scandinavian model perhaps," he finished.

With political pundits asking why AAP could not replicate the Delhi model in Maharashtra, an elated Rueben Mascarenhas, Jt. national secretary AAP from Mumbai said, "This win and model of governance has set a benchmark and is for others to follow. Right now we are limited to Delhi but we are contesting the Navi Mumbai elections next month and the BMC elections, too."

For Congress, "The time for introspection is over and it is time for drastic action," said spokesperson Sanjay Jha. "We did reasonably well in Haryana, Maharashtra and Jharkhand, but the meek surrender in Delhi is baffling. It does not do justice to Sheila Dikshit's legacy of transforming Delhi. For us, besides organisational reforms, we need to sort out the leadership issue," he said.

Next Story : Woman immolates herself outside police station; dies