Paswan claimed the chief minister faced "greater danger from his close aides than from me" even as he alleged that Kumar has insulted former JD(U) national president RCP Singh, and had previously humiliated Sharad Yadav and George Fernandes 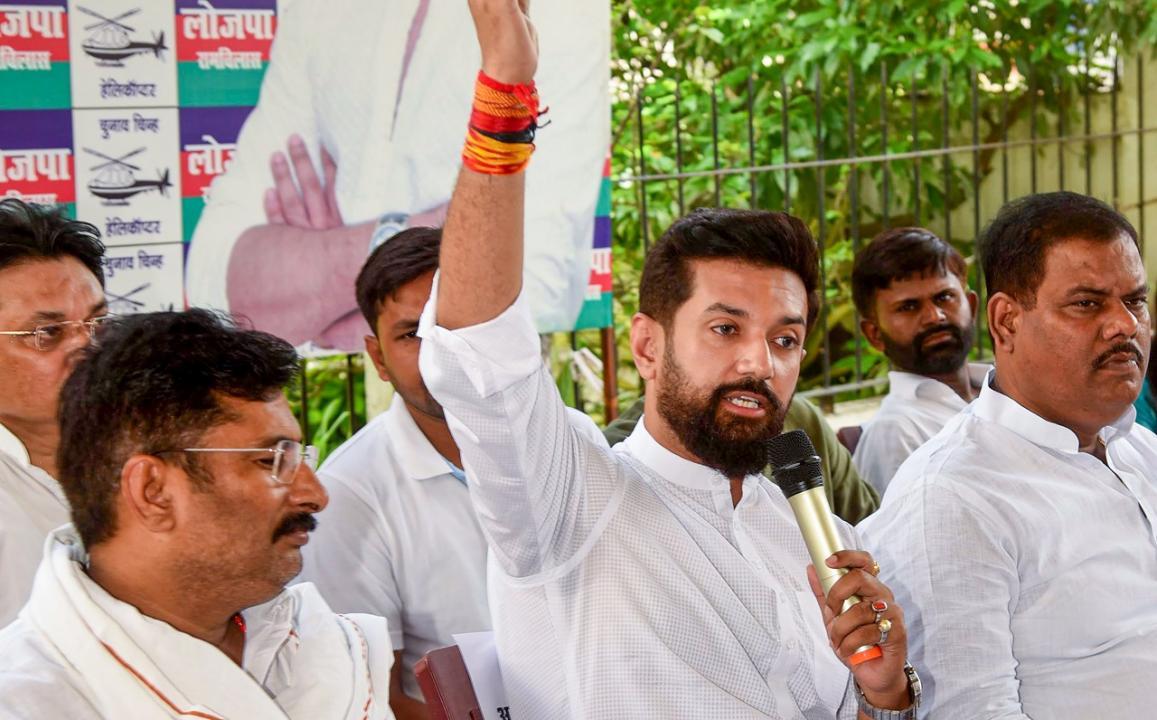 
Former Lok Janshakti Party (LJP) chief Chirag Paswan on Monday hit out at the JD(U) and dared it to take on the BJP directly instead of accusing him of involvement in a conspiracy to dent Chief Minister Nitish Kumar's popularity.

Addressing a press conference, Paswan claimed the chief minister faced "greater danger from his close aides than from me" even as he alleged that Kumar has insulted former JD(U) national president RCP Singh, and had previously humiliated Sharad Yadav and George Fernandes.

"Never before has one heard of a party accusing its own former national president of corruption. But, this is Nitish Kumar for you," Paswan said.

Paswan, who had in the 2020 assembly polls fielded candidates, many of them BJP rebels, in all seats fought by the JD(U) which saw its tally plummet from over 70 five years ago to under 45, bristled at the term "Chirag model" coined by Rajiv Ranjan Singh alias Lalan, the party's current national president.

"If there is a Chirag model, it stands for our call for 'Bihar First Bihari First', our vision for the state which the CM never respected. He should stop blaming me for his party's debacle. The Janata Dal (United) is, indeed, a divided house. RCP has been made to quit. But Nitish Kumar needs to be wary of people like Lalan and Upendra Kushwaha," he alleged.

Paswan mocked the JD(U)'s claim of Kumar having transformed Bihar during the more than a decade and a half he has ruled the state and cited the state's poor rankings in reports of the NITI Aayog.

"And when the NITI Aayog met yesterday, our CM refused to attend the meeting. It was an opportunity for him to air the state's demands before the prime minister. In the process, Bihar suffers on account of his arrogance," alleged the son of late Union minister Ram Vilas Paswan.

"What problem did Nitish Kumar have in attending the meeting even if he wants to oppose the BJP? Can he be a more vehement opponent than Mamata Bannerjee and Arvind Kejriwal, both of whom were present," Paswan asked.

He said that because of the "tantrums of the Bihar CM", the spotlight is on whether he will continue in chair when it should have been on the floods and the droughts that affect different parts of the state.

The Jamui MP, whose father's party was split by rebellious members of his family last year and who now heads a splinter group called LJP (Ram Vilas), seethed at the JD(U)'s allegation that he had worked as a "mohra" (pawn) in the last assembly polls.

"I act as per the values I have imbibed from my late father whom the chief minister never gave due respect. The JD(U) should stop making allegations against me and if it suspects BJP of having hatched a conspiracy, it should take on the ally directly," he said.

Paswan, who has remained consistent in his admiration for Prime Minister Narendra Modi, deplored the JD(U) for appearing sympathetic towards the opposition's allegations of corruption and price rise.

"When they had run short of issues to fight the last assembly polls, they raised the bogey of jungle raj, to dissuade people from voting for the RJD. Now, they seem to be in a mood to join hands," he said.