There is no groupism in Congress: Himachal Pradesh party chief Pratibha Singh 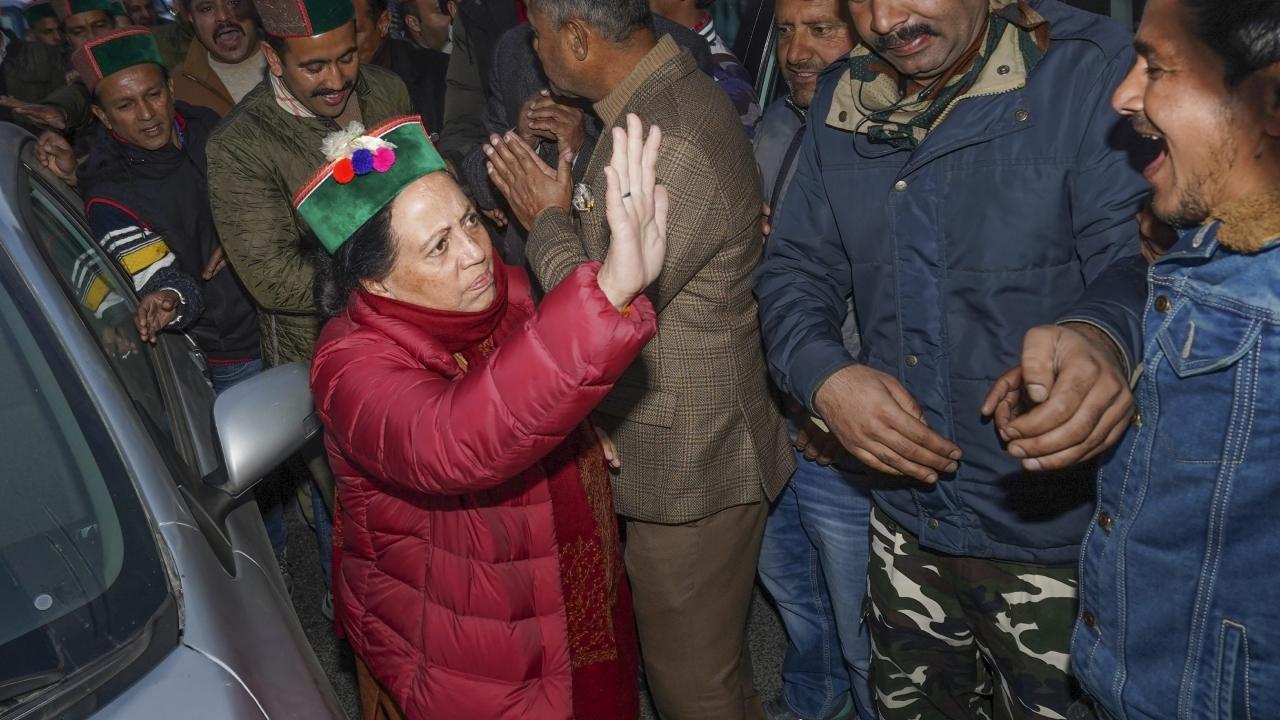 
Himachal Pradesh Congress chief Pratibha Singh informed that they will be holding a meeting to decide upon the name of the Chief Minister of the hill state in the evening.

"We will be holding a meeting in the evening and then deciding the name of the CM. There is no groupism and everybody is with us," Pratibha Singh said hours after her statement sparked a row of controversy.

State President Pratibha Virbhadra Singh, in a conversation with ANI, was seen hinting at her desire to be chosen as the CM of the state as she said that the party cannot ignore the person (her husband- Virbhadra Singh) in whose name it contested the polls and won.

"They can't neglect his (Virbhadra Singh) family. We won on his name, face and work. It can't be the case that you use his name, face and family and then give all the credit to someone else. Even High Command won't do this," she had said.

Having said the aforesaid, Congress leader Sukhvinder Singh Sukhu had said that the MLA selected by the party's High Command would become the new Chief Minister of Himachal Pradesh.

Meanwhile, another Congress leader Kuldeep Singh Rathore also said that there are no differences of opinion among the party MLAs as everyone has come here by the party ticket.

"Nobody is narrating any different story. everyone has been chosen by the party ticket and everyone would respect the Congress high command's decision," Kuldeep Singh Rathore said ANI.

He further added that a decision will be taken by the party leaders, and supervisors Bhupinder Hooda and Chhattisgarh CM Bhupesh Baghel will be conveyed to the party high command and they will then take the final call, he said.

Chhattisgarh CM and party's Himachal supervisor Bhupesh Baghel clarified that there was no question of neglecting anyone and the party would go on by taking everyone together.

"There is no question of neglecting anyone. Everyone will be taken together to go ahead. Everyone has the right to express their opinion. There is no problem," CM Baghel said as he landed in Shimla for the meeting.

He said that it is the victory of the people of Shimla and Congress leaders and workers. "Everyone worked hard. Priyanka Gandhi Vadra played the most crucial role, and we also had blessings of Sonia ji and Rahul Gandhi ji," said Baghel.

Finalizing its chief ministerial candidate for Himachal Pradesh appears to be a big task for Congress with various aspirants in the fray including Pratibha Singh. Former state Congress chief Sukhwinder Singh Sukhu and CLP leader Mukesh Agnihotri are also seen as the other contenders for the post.

Congress returned to power in Himachal Pradesh after five years in the results announced on Thursday. The Congress won 40 seats in the 68-member assembly riding on anti-incumbency.

While Congress won 40 seats in Himachal Pradesh, the BJP won 25 seats. Independents won three seats and AAP failed to open its account in the state.

Himachal Pradesh has a long tradition of alternating governments and Congress was on the right side of anti-incumbency. Himachal Pradesh Chief Minister Jai Ram Thakur resigned following the party's defeat in the polls. Notably, in the 2017 Assembly elections, the BJP formed the government by winning 44 seats while Congress secured 21 seats.

Next Story : New Himachal Congress MLAs meet to discuss appointment of next CM amid show of strength by aspirants