The police action happened late Monday night when the accused tried to attack the policemen and was shot in the leg, and put under arrest 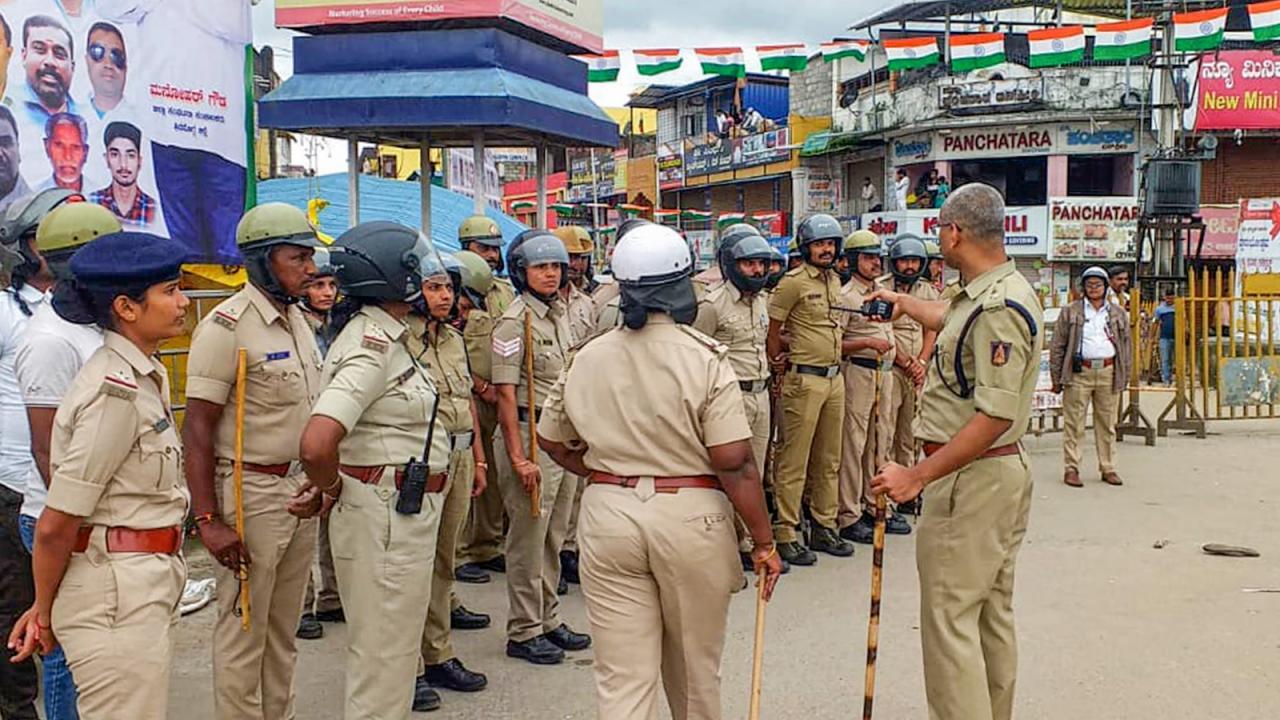 Police personnel deployed to maintain law and order after a dispute between two groups over installing poster of Savarkar and Tipu Sultan in Shivamogga. Pic/PTI


The Karnataka Police shot the main accused in the case of stabbing of two persons following the row over removal of Veer Savarkar's flex from a circle of Shivamogga city.

The police action happened late Monday night when the accused tried to attack the policemen and was shot in the leg, and put under arrest.

The flex of Veer Savarkar was put up as part of the celebration of the 75th year of Independence. The main accused, who had been shot at during the police action, has been identified as Zabiulla, a resident of Marnamibail in Shivamogga. The police have detained more than 10 persons so far in connection with the incident.

A special police team after gathering definite inputs had zeroed in on the main accused Zabiulla. When the police went to arrest him the accused allegedly tried to attack them and he was shot in leg by the police inspector Manjunath Kuri, police sources said.

The police arrested and shifted him to the Meggan hospital. Later, after the treatment, Zabiulla was transferred to the jail ward of the hospital.

Additional DGP Alok Kumar had stated that the political connection or association with any organisation by the accused will have to be ascertained. He further stated that apart from lodging cases, a decision will be taken to attach the properties of the accused after discussing with the district commissioner.

Prohibitory orders have been clamped in the Shivamogga city till August 18 and security has been tightened. The police department has sent 15 platoons of reserve police and six more platoons will be added.

One Superintendent of Police (SP), three additional SP's, three DySP's from the Criminal Investigation Department (CID) and 10 inspectors have been deputed to Shivamogga district additionally to monitor the law and order situation.

The police have identified the main accused persons and are confident of arresting them soon. Zabiulla with others had stabbed Prem Singh, who was standing before his house and then escaped, police said.

Meanwhile, the Kuvempu University of Shivamogga has declared a holiday for the colleges and postponed exams for post- graduation courses. The schools and colleges are also closed down in the neighbouring town of Bhadravathi.

Two incidents of stabbing of youth were reported on Monday in the violence that broke out after the removal of Veer Savarkar's flex from a circle in Shivamogga city by a group of people. The group had also attempted to install a flex of Tipu Sultan in its place.

20-year-old Prem Singh was standing before his house when he was targeted by the miscreants. He has been admitted to the Meggan hospital in Shivamogga.

27-year-old Praveen, a shop owner in the Gandhi Bazar area was closing his shop and returning home, when the miscreants stabbed him and disappeared.

According to police, Veer Sawarkar's flex was installed at the Amir Ahmad Circle in Shivamogga city and the whole junction was decorated as part of celebration of the 75th year of the Independence Day. However, a few youths objected to it and took away the flex of Savarkar. They attempted to put up Tipu Sultan's flex in its place leading to violence and stabbing.

The city witnessed a large-scale violence after the murder of Bajrang Dal activist Harsha and authorities had clamped prohibitory orders for more than 10 days to bring back normalcy. Former Chief Minister B.S. Yediyurappa hails from Shivamogga and the district is considered as a bastion of BJP.