‘Will continue the fight for my constitutional right,’ says Udupi college student

Amid a controversy triggered by a move banning hijab in classrooms, the Government Women’s Pre University (PU) College in Udupi has been shut for a week after over six Covid-19 cases were registered from the institute. As the stand-off over the hijab ban continues, students say they will continue the protest until their demands are heard 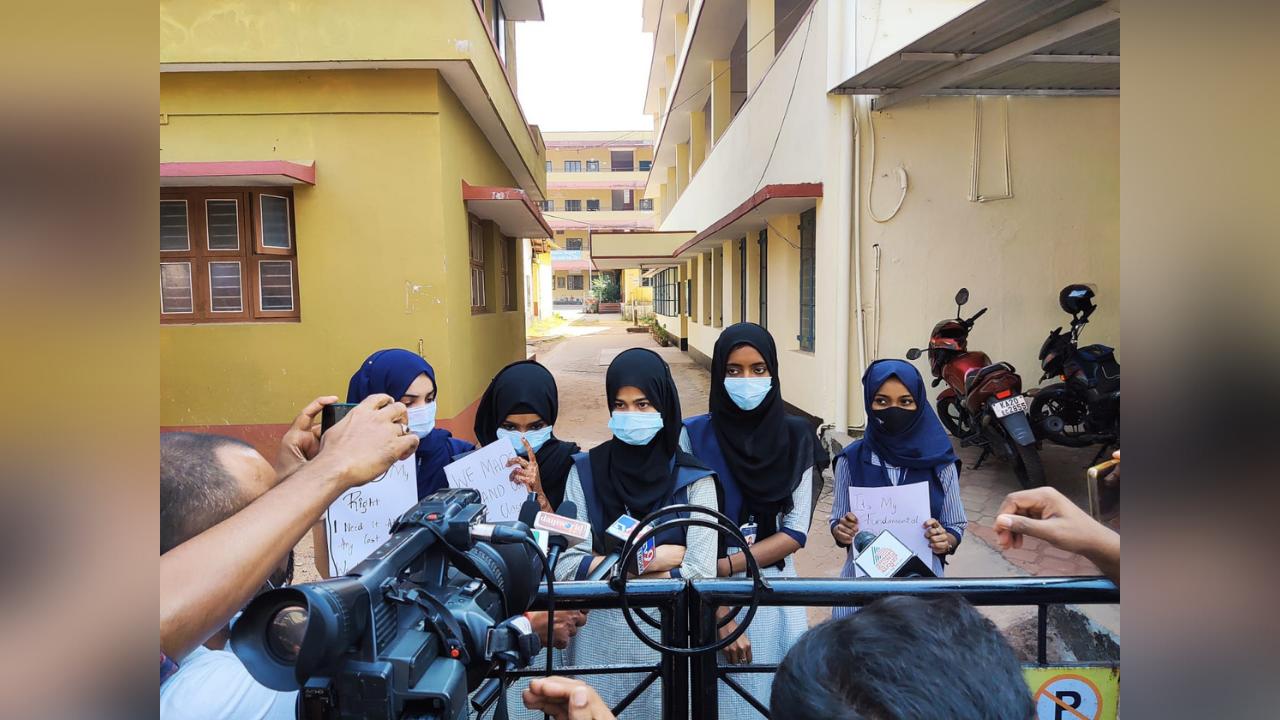 Students protesting outside the college with placards demanding their right to wear hijab in classrooms. Image credit: Official Twitter handle of Masood Manna


“It’s a secular country and I must fight for my constitutional rights. We are facing so much hatred from the college administration, our own lecturers and so many others. It is mentally disturbing,” says 17-year-old Aliya Ashadi, one of the eight students protesting against the hijab ban in classrooms at the Government Women’s Pre University (PU) College in Karnataka’s Udupi district. Ashadi and fellow students have once again reached out to the district collector, who has said that the matter will be resolved soon.

“We have been informed that action will be taken soon. But the same was said two weeks back too and nothing happened,” Ashadi adds, in a phone interview with Mid-day Online.

On January 21, the college was declared shut after six students and a lecturer reportedly tested positive for Covid-19. This comes amid a situation when the institution has been facing backlash for denying entry to the eight students, who want to be allowed to wear a hijab in the classroom. The issue gained international attention when a picture of the students studying on the staircase went viral on the internet. Since then, there have been multiple meetings between the college principal, college committee members, district administrator and the parents of the students, all of which failed to reach a resolution.

No information from the college authorities

While the college is said to reopen on January 27, the students have received no information from the principal or lecturers on whether they will be allowed to enter the classrooms or not. Students have alleged fearing protests the college administration has now shut operations.

Mid-day Online reached out to Rudre Gowda, principal of Government Women's PU College for his comments, but when this reporter identified herself to him as a journalist, he cut the call.

Masood Manna, state committee member of Campus Front India—a students’ body proactively supporting the protesting students—says the college has not yet communicated with the students and their parents about the prospects of allowing the students inside the classrooms. “The college administration, including the principal and deputy director of the PU, has refused to give any information about the closure. There are cops stationed in the campus now,” he adds.

This discrimination ultimately affects their right to education, says Ashadi. She and her seven friends, who are pre-university students, have now been finding it difficult to access notes and other study materials. “We are currently studying on our own and are seeking help from classmates for notes. But, gradually they have stopped sending us notes. They are facing threats from the college for helping us,” says Ashadi, who is a commerce student, is preparing for her Class 12 board exams.

Hijab not in violation of the rule

While the parents are standing in solidarity with their children and are not ready to compromise with the hijab, Ashida clarifies that it is completely their choice to wear the hijab and that nothing has been forced on them.

Udupi MLA and chairperson of the college development committee, Raghupati Bhat had chaired a meeting with the parents of over 1,000 students on January 1, wherein the MLA said that the college will continue following the ‘uniform code’, which includes a veil, and that there is “no question of accepting the demand of the six students to allow them to wear a hijab.” Bhat went on to say that the parents are free to seek admission in any other PU college.

The students have also stated that the rulebook mentions no such university rule concerning the hijab. According to the guidelines, accessed by Newslaundry, in the terms and conditions listed on admission forms, the college management mentions that students should wear a “neat, full uniform” and does not specify religious symbols such as the hijab or the cross.

“We want to continue in the same college now as changing the college is not a solution. If we don’t speak up, the same will continue with the next batch of students. We don’t know how the atmosphere will be when we will be allowed to enter the classrooms, but that is a secondary concern as of now,” says Ashida.

According to Ashadi, the hijab ban in classrooms has been a long standing issue over the last year, when the students were forced to remove their hijab by the lecturers. Due to the Covid-19 lockdown and shorter periods of offline classes, the matter was suppressed.

“When the offline classes began, our parents met the principal three or four times requesting them to allow the students to wear hijab in classrooms. But, they didn’t agree. Lecturers pulled out the hijab and asked us to move out,” says Ashadi.

The students have repeatedly highlighted that on asserting their right to wear a hijab, they faced threats of deduction in internal and semester marks and other actions that would have implications on their career. Additionally, they also point to other points of discrimination in the campus.

“We are not allowed to greet our friends with a ‘Salaam’ and are barred from speaking Urdu. There are teachers who speak in Tulu and Kannada and other languages,” says Ashida.

According to Manna, the issue has been politicised and has been given a communal colour by the local politicians and Hindutva groups. “From the beginning, there have been antagonistic comments in all meetings such as ‘if you wear hijab, Hindus will wear saffron’. But, no one is ready to listen to the students about their ordeal and consent,” says Manna.

The National General Secretary of BJP’s OBC Morcha, Yashpal Suvarna, who is also the vice president of the college development committee, told the Deccan Herald, “These girls who are members of Campus Front of India (CFI) are keen on creating controversy. The college has its own rules, regulations and disciplinary procedures. The uniform was introduced to offer an egalitarian approach to education, as there are many poor women studying in the college.”

Suvarna also added that there are over 150 women from the minority community in the college, but none of them have raised such demands and that this can provoke Hindus to wear saffron scarves.

Manna says, “The other students fear that their internal marks would be deducted and they will have to face academic consequences if they wear a hijab. They are under a threat. If these students are allowed to wear a hijab, they will also start wearing one.”

Moreover, Ashida says, “I do not want to compare whether students from other communities are able to practice their religion. It will end up communalising the issue. We are just fighting for our rights.” Article 25 of the Indian Constitution guarantees freedom of religion to all persons, wherein citizens have the right to freely profess, practice and propagate their religion.

As discussions with the college principal and education department officials continue, Manna says, “We hope for a positive response from the district administrator before the college reopens. If not, we pursue the case legally and protest further.”

Next Story : SC agrees to hear SpiceJet plea against admission of winding up petition by company court