Young women will do the most to shape tomorrow's India: President Murmu in her Republic Day eve address

The President said that due to people's participation in 'Beti Bachao, Beti Padhao' campaign, women's representation has been rising in every sphere of activity 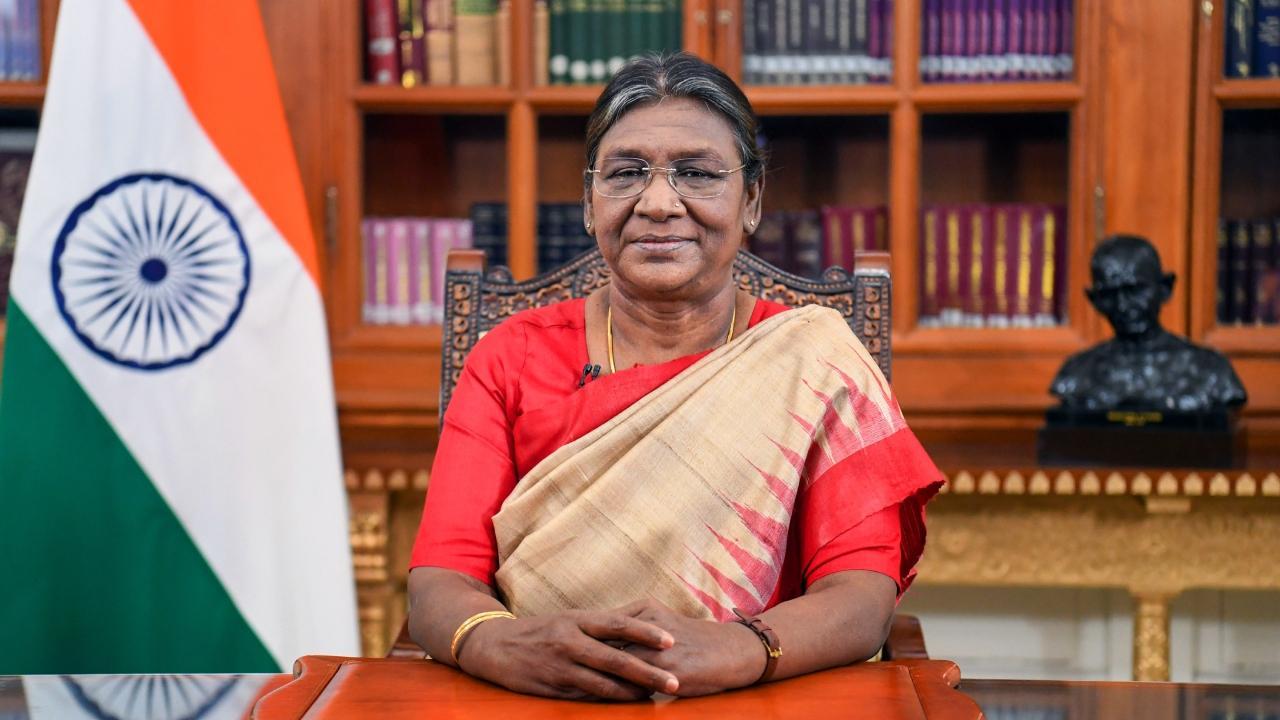 President Droupadi Murmu addresses the nation on the eve of the 74th Republic Day. Pic/PTI


President Droupadi Murmu on Wednesday said that women's empowerment and gender equality are no longer mere slogans and expressed confidence that young women will do most "to shape tomorrow's India".

In her address to the nation on the eve of the 74th Republic Day, the President said that due to people's participation in 'Beti Bachao, Beti Padhao' campaign, women's representation has been rising in every sphere of activity.

She said India's Mars Mission was powered by a team of extraordinary women, and the sisters and daughters of India are not far behind in other areas too.

"Women's empowerment and gender equality are no longer mere slogans, as we have made great progress towards these ideals in recent years. During my visits to various states, educational institutions and while meeting delegations of various professionals, I am amazed by the confidence of young women. I have no doubt in my mind that they are the ones who will do most to shape tomorrow's India. What miracles cannot be achieved if this half of the population is encouraged to contribute to nation-building to the best of their ability?" she said.

The President said the same vision of empowerment guides the government's approach to the marginalised communities including the Scheduled Castes and Scheduled Tribes.

"In fact, the aim is not only to remove hurdles and help them in development but also to learn from them. Tribal communities, in particular, have rich lessons to offer in many areas, ranging from protecting the environment to making the society more cohesive," she said.

The President emphasised the need to look at the ancient traditions with a new perspective to maintain the balance between development and the environment.

"We need to reconsider our basic priorities. The scientific aspects of traditional life-values have to be understood. We must, once again, rekindle that respect for nature and humility before the vast universe. Let me state here that Mahatma Gandhi was a true prophet of our times, as he foresaw the calamities of indiscriminate industrialization and cautioned the world to mend its ways."

She said that people need to modify their lifestyles "if we want our children to live happily on this fragile planet".

"One of the changes suggested pertains to food. I am happy to note that the United Nations accepted a suggestion from India and declared 2023 as the International Year of Millets. Millets were essential ingredients of our diet and they are making a comeback among sections of society. Coarse grains like millets are eco-friendly as they require less water to grow and yet they provide high levels of nutrition. If more and more people turn to millets, it will help conserve ecology and also improve health," she said.

The President said that with the outbreak of the pandemic, the world had changed within a matter of days and lauded the role of the country's leadership, scientists, doctors and coronawarriors in meeting the challenges.

"One more year has gone by for the Republic and another year commences. It has been a time of unprecedented change. With the outbreak of the pandemic, the world had changed within a matter of days. During these three years, whenever we have felt that we have finally put the virus behind, it raises its ugly head.

"However, there is no need to panic because we have learned in this period that our leadership, our scientists and doctors, our administrators and 'Corona Warriors' will make every possible effort to meet any situation. At the same time, each of us has also learned to not let our guard down and remain alert," she said.