And wish a bride for Meeran Haider

He protested against the CAA, was jailed for allegedly fomenting the Delhi riots; his ailing father sold a plot of land to meet legal expenses and worries whether he would get a chance to marry off his son 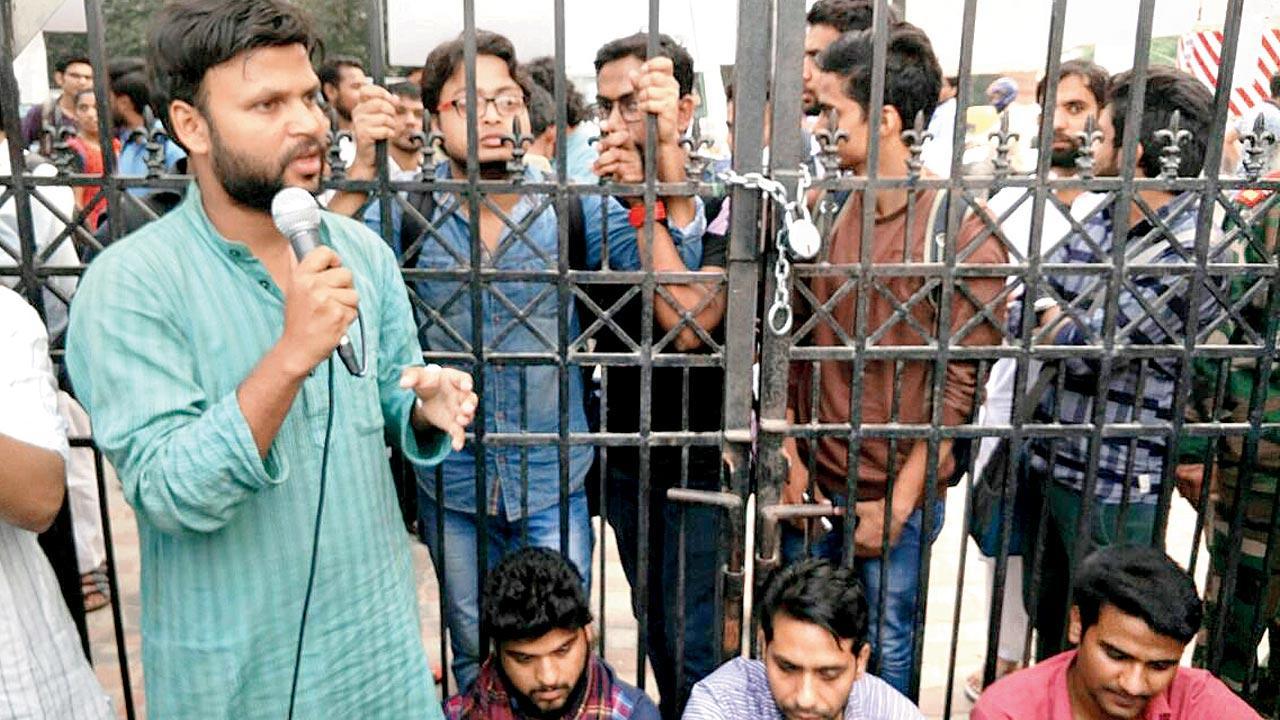 Meeran Haider (in green kurta) embodies the political consciousness of an emerging Muslim middle class, driven to work for the community. Pic/Facebook

Shabul Hassan spends many a sleepless night thinking of his youngest son Meeran Haider. He wishes Meeran had heeded his suggestion to take up a job instead of enrolling for PhD. He could have augmented Shabul’s financial resources, and a bride would have been found for Meeran, the only one of his five children who is still single. Shabul is pushing 70, his body ravaged by diabetes and the stones in his kidney make him tremble with pain at times. As the nightly hours slip past, he hopes Allah will provide him the opportunity to marry off Meeran, the only paternal responsibility he thinks he has yet to fulfil.

It is likely that you have forgotten the 31-year-old youth. The blame does not lie on you, for the Indian State spawns a new victim every month: It was Teesta Setalvad in June, Mohammed Zubair in July.

In December 2019, Meeran was at the forefront of the protest at Jamia Millia Islamia, a central university, against the Citizenship (Amendment) Act, 2019. With the February 2020 riots in Northeast Delhi and the pandemic-induced lockdown in March aborting the anti-CAA movement, Meeran took to providing relief to Bihari migrants desperate to return home. The boy from Nasir Chhapra village in Bihar’s Siwan district could not turn away from fellow Biharis reeling under the fear of death. But the Delhi police, under the Central government’s control, arrested Meeran in April 2020, booked him under the Unlawful Activities (Prevention) Act for fomenting the Delhi riots, and sent him to Tihar Jail.

Meeran embodies the political consciousness of an emerging Muslim middle class, driven to work for the community. And to think, he is just the person who could have forged ahead in the rat race. He did his BTech in Mechanical Engineering from Jamia Millia Islamia, from where he also did an MBA in International Business. He went on to do an MPhil in West Asian Studies, and began to mull the idea of doing a PhD in management studies.

It was then that Shabul told Meeran, “Take up a job. I do not have money to finance you.” Meeran said he would take tuition to finance his PhD, and registered himself for it at Jamia.

Perhaps you are surprised at a father opposing his son’s scholarly quest. Shabul slogged for 20 years, between 1991 and 2011, as a blue-collar worker in Saudi Arabia. He spent a large slice of his earnings to educate his two sons and three daughters—and on four weddings. Getting on in age, he hoped to live on his savings, which began to dwindle as his wife had to undergo dialysis for a few years.

You think Meeran should have taken up a job to financially bail out his father?

But then, idealism can dull a person’s instinct for pragmatism. Meeran thought the bane of the Muslim community were its leaders, most of them either toughies or dynasts. Muslims required leaders emerging from the grassroots, with a modern outlook—and yet anchored in Islamic culture. Like Jamia students, like him.

It was only natural for Meeran to join the Aam Aadmi Party, which had every middle class person dream of entering electoral politics. Years later, the AAP’s metamorphosis from an agent of change to obsessing about electoral victories dashed Meeran’s hope. He joined the Rashtriya Janata Dal, going on to become the youth president of its Delhi chapter. It was the party of Biharis, for Biharis, fighting for social justice.

But Meeran’s turf was Jamia, where he co-founded the Jamia Students’ Forum, which brought student outfits of different political parties on one platform for demanding their university conduct union elections, not held since 2005. He helped float the Jauhar Study Circle, which discussed political ideas and sought to reclaim its traditional political culture—nationalist and centrist. He wanted Jamia students to take the lead on issues agitating them, not have outsiders show them the path to change.

When Jamia burst out against the CAA, he rushed back from Siwan, where he had gone to attend the burial of his mother. He was sublimating his sorrow by joining the raging battle for equal citizenship for all Indians, regardless of their religion.

Meeran is in jail. Meeran is forgotten now. Meeran has a legal battle to wage.

“I have not heard from those who had promised us financial help,” Shabul said. There are lawyers representing Meeran pro bono. The Association for Protection of Civil Rights pitches in. Yet sundry expenses related to Meeran compelled Shabul to sell a plot of land to raise money.

Early in June, Shabul came down from Siwan to meet Meeran in Tihar. Overcoming the urge to melt into tears, the father told the son he had not murdered or committed dacoity—he had only fought for his community’s rights. That is not a crime, not a sin. Meeran’s face lit up.

“In Allah’s durbar, there can be delays, but every person gets a hearing—and justice is done,” Shabul told me. Once Meeran walks out free, Shabul will find him a bride. There will be band baaja baraat; and the night will no longer seem immense for Shabul.

Next Story : July is over, the Monsoon wedding enters August