'Our paths ran parallel to the conservation movement' 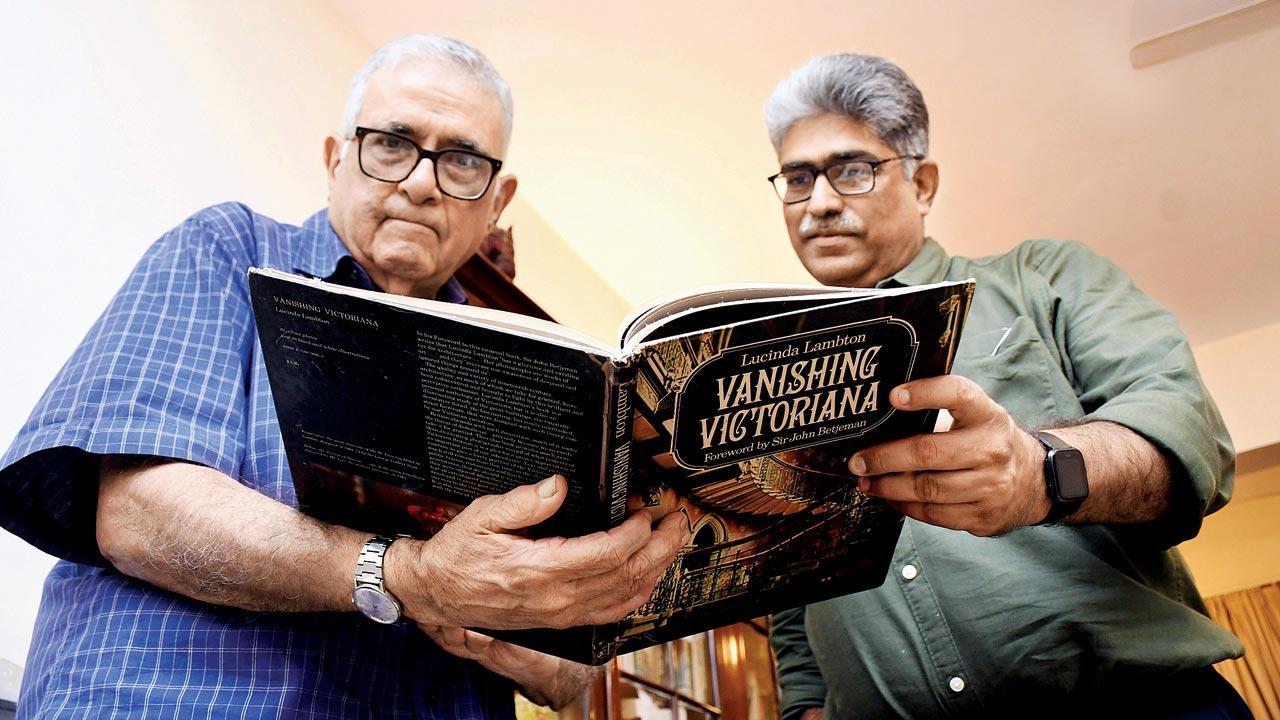 Lecturing and authoring extensively on conservation, nationally and internationally, Vikas Dilawari used a double Masters in Conservation from School of Planning and Architecture, New Delhi and the University of York, to re-contour major monuments in Bombay as well as across the country. With a practice executing restoration projects from prime landmarks to “unloved buildings”, Vikas, alongside Tasneem Mehta of INTACH’s Mumbai chapter, was instrumental for the nomination of Victoria Terminus as a World Heritage Site in 2004. Eighteen of his projects have won UNESCO Asia Pacific awards for cultural preservation in South-East Asia, most recently the CSMVS Museum. He acknowledges his quiet genius of a mentor, the late Foy Nissen, whose in-depth mapping of the city’s architectural wealth will always remain stellar. 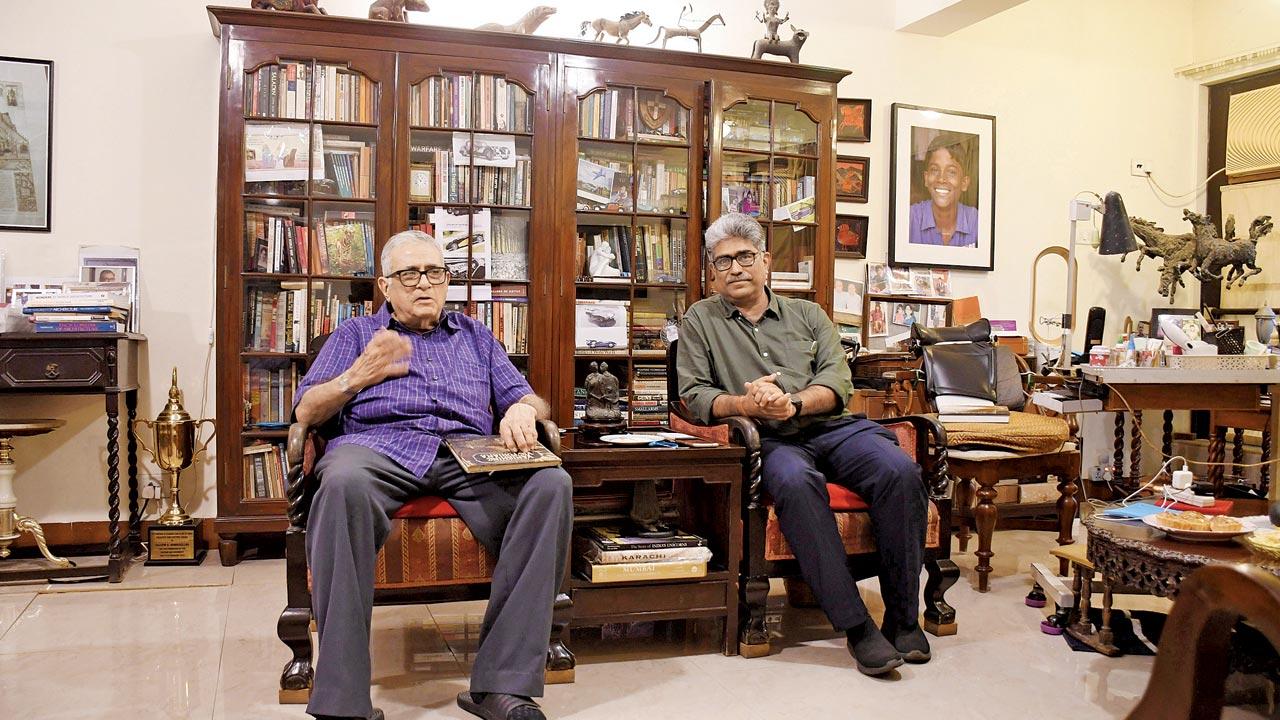 Graduating from Trinity College, Cambridge, Saleem Ahmadullah worked in a succession of commercial firms at jobs involving administration and the sale of product ranges, including portable electric and machine tools, fans, industrial grinding wheels, laminates and plastic. His concern for Bombay’s impressive buildings spawned a passion for preservation and restoration. Over the years, he developed an inclination for military history and considerable involvement with the organisation of different branches of motor sport and with vintage and classic cars.

Apart in age by decades, the unassuming architect and veteran chronicler reveal a combined mission: spreading wide their knowledge of Bombay with the deepest love for it.
• • •
Saleem Ahmadullah: I heard about Vikas when my sister mentioned him as the man behind the magnificent work on the Rajabai Clock Tower. When we did meet, he was stationed morning to evening in the studio kiln in the passage there. His awareness of the conservation of real stained glass was amazing and I noticed his utmost dedication to detail.

Vikas Dilawari: The University Library housing the Rajabai Tower was my first project, at a time when conservation was in its infancy. Clients and contractors were not so informed about preservation then. The tower being a Gothic Revival building, and the project backed by the British Council Division, Mumbai and British Department of Trade and Industry, headed by Sir Richard Needham, I could use my post-grad degree skills authentically. For a change, Brit experts came to train excellent Indian counterparts in the lost arts of stained glass painting and glazing. At our end, Vispi Balaporia and Nawaz Mody liaised support for this.

Foy (Nissen) formally introduced me to Bittu in 1988. We were linked through their mutual friend, Gillian Tindall, the famous Bombayphile author of City of Gold, whom I knew from my York years. Foy continuously inspired me till his death in 2018. 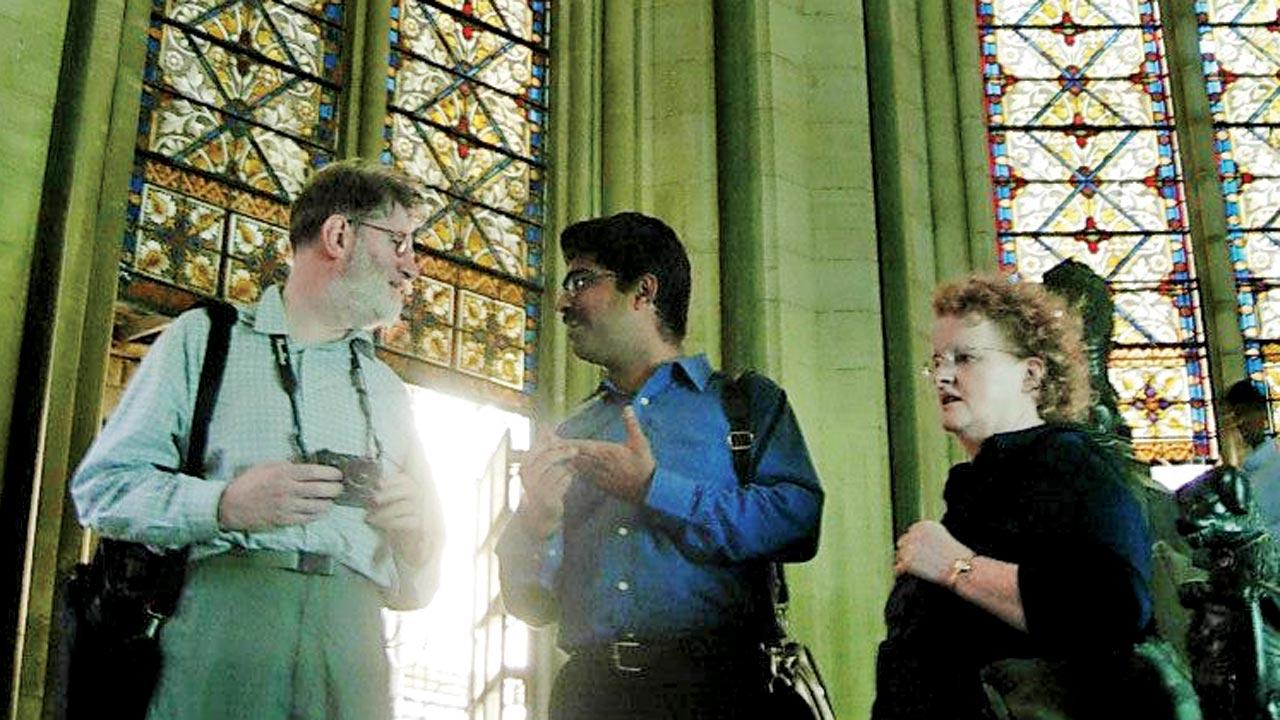 SA: Foy was the guru we had in common. Meeting various architects, I sensed an immediate affinity with Vikas. From the start of our acquaintance, he struck me as a sincere, extremely approachable person, who in his own modest, understated way, genuinely possesses a great feel for preservation.

VD: Bittu and I bonded as ideas of conservation were gaining momentum. Our paths ran parallel to the movement. Kisan Mehta’s Save Bombay Committee already worked in the areas of urban and regional planning and development. There was Ved Segan, there was the Mumbai arm of Indian Heritage Society. The Bombay Environmental Action Group’s Shyam Chainani formulated listings that led to key laws passed to protect precincts. The Fort Management Plan was initiated by the Urban Design Research Institute, after Rahul Mehrotra organised an important seminar on the Fort precinct. These crusaders, with DT Joseph, Cyrus Guzder and Heta Pandit, helped earn Bombay the distinction of the country’s first city to get heritage legislation.

SA: It was the critical coming together of a loose consortium of like-minded individuals, united by similar sensibilities and concern for the city. Faced with the government allowing rampant demolition, a growing number of us took it upon ourselves to offer local history nuggets. For instance, that our only two public buildings with stairs on an elevation are the Asiatic Library and the Elphinstone Technical Institute steps.

If asked for a wish-list of personal favourite buildings, I’m sooner inclined to make a much longer one of today’s monstrous buildings which we want to see blown up!

VD: Bittu is a mine of information, engaging actively with a range of subjects—aircraft, cars, motorcycles and firearms. He’s tracked Bombay’s hidden milestones, its cannons, can explain when and why muzzle-loading cannons gave way to breech-loading… so many facts and findings.

SA: Increasingly fascinated by Bombay’s history, especially occurrences and events from the 18th to first half of the 20th century, I began some study of Bombay’s grand architecture, which sprang up after the horrors and chaos of the 1857 uprising, going on until the crash of 1930-31.
As an adjunct to my interest in Bombay, I dabbled in the history of Pune, Mahabaleshwar and Matheran. I hunted for and located most of the old milestones that marked the distance from St Thomas’s Church, now St Thomas’s Cathedral, at what we know as Horniman Circle. It was earlier called Elphinstone Circle.

VD: Monitoring and nurturing a site minutely—be it the Mumbai University Library, Dr Bhau Daji Lad Museum, Christ Church or Flora Fountain—I am quite reluctant to move to the next. There is much to learn from each beautiful, sadly neglected building and every person associated with it. A woman sweeping the Rajabai Tower grounds was sensitised enough to respect her workplace. Taking pride in being there, she reported to us anything broken, in altered form or taken away.

People praising a completed project attribute the transformation to me. But I’ve just brought its essential wonder back a bit.

SA: That’s said with such typical humility. Vikas is ever ready to share and discuss his ideas, listen to alternative points of view, explain things, answer questions. Winning multiple honours and the accompanying prestige has not eroded the sterling qualities which, from the very beginning of our getting to know each other, have made me trust and respect him.