The life and times on Dufferin

An ex-cadet archives the collective memories of seamen who trained on a legendary vessel, moored off Mazgaon Pier, which shaped Indian maritime history 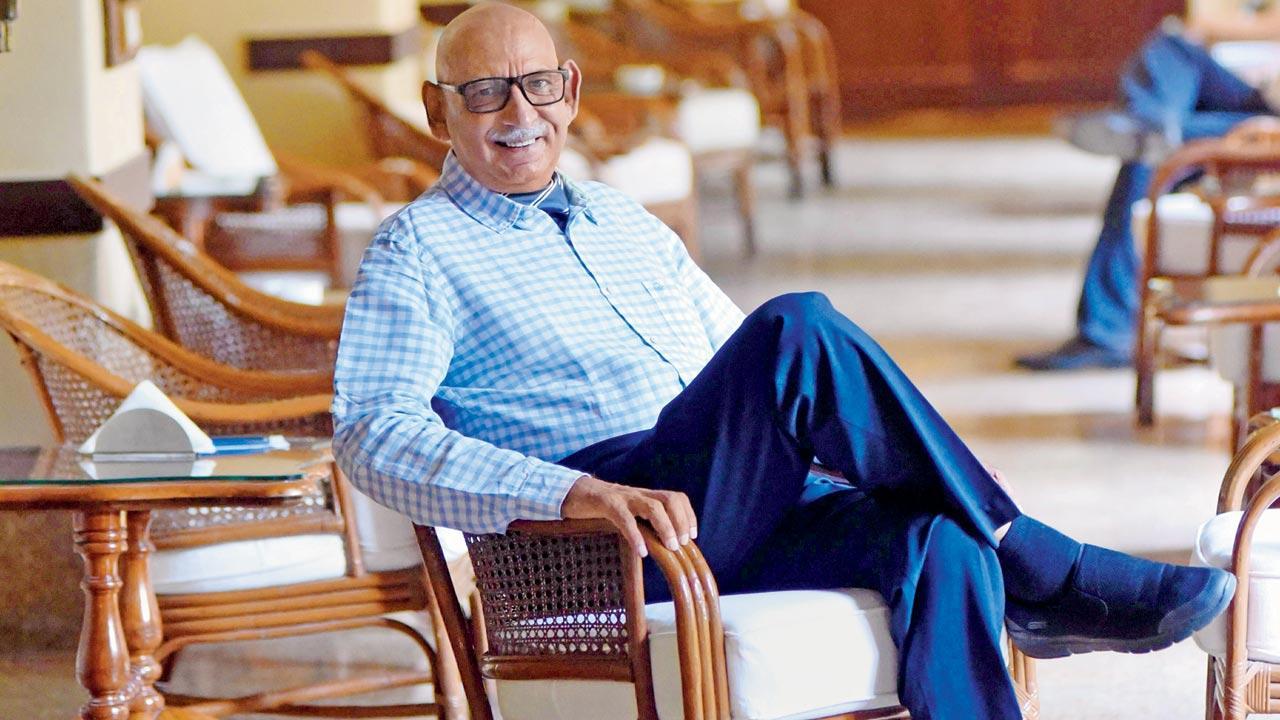 Ex-cadet Kapildev Bahl began putting together the book, History of The Dufferin, during the COVID-induced lockdown. Pic/Sameer Markande

While no ship lasts forever, it can exist in the hearts of those who sailed on it.  Much like the life of the famed vessel Dufferin, which does not live anymore in steel and timbre, but resides in the reminiscences of the cadets who served and trained onboard. One ex-cadet, the Mumbai-based Kapildev Bahl, has celebrated the ship as a life-transforming institution, which sculpted many lives even after it ceased to exist. In a newly-launched book on the history of Dufferin, the alumnus of the 1969-71 batch has showcased memories of 40-odd Indian seamen who treasure lessons learnt onboard the vessel.

He plans to add memories of ex-cadets from other nationalities in the second edition.

Dufferin is a relatively known story, as ex-cadets’ personal narratives are available online.  But the scattered versions have been devotedly stitched by Bahl. The 300-page patchwork of memoirs, published by Innersearch Foundation, is a labour of love for the alma mater. It shows in the self-published book, which can do better with tighter copy editing, and savvier marketing and distribution.  But, it is a good-to-have resource on a legendary ship’s contribution to India’s maritime industry. 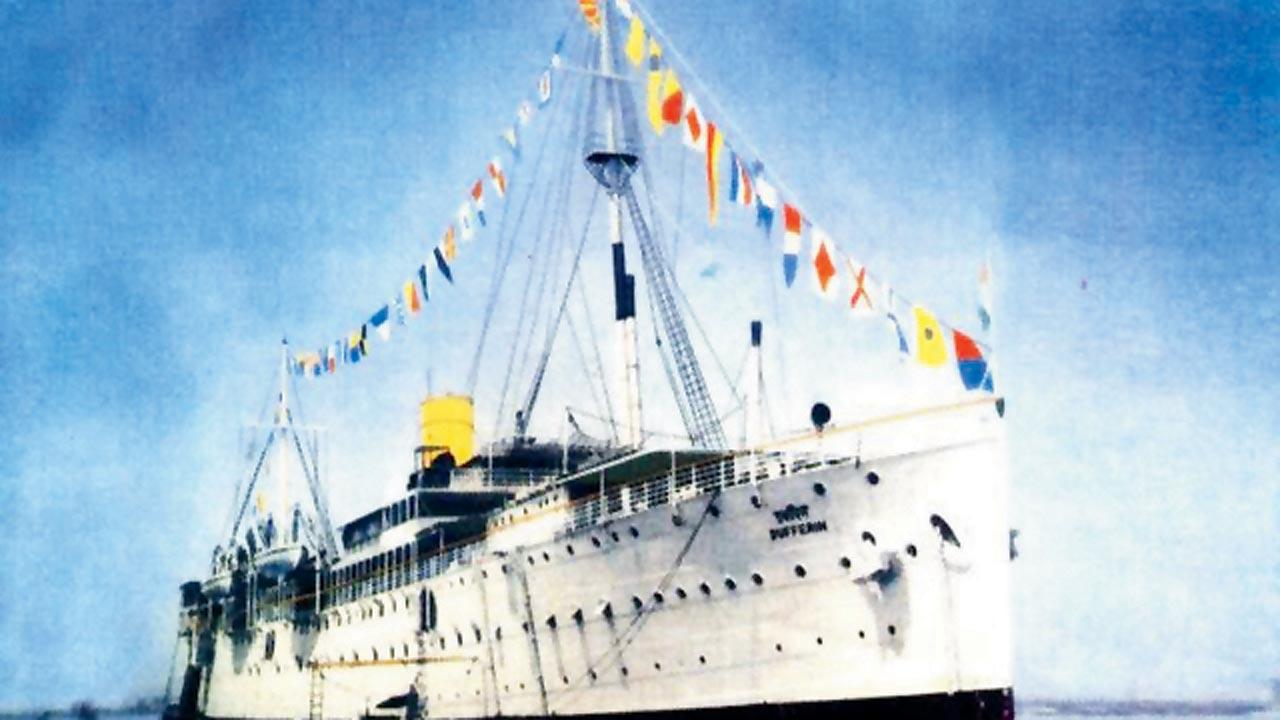 Dufferin was built in Barrow-in-Furness, England in 1904. It was taken over by the Government of India for trooping duties between Burma, Malaya, Hong Kong and Africa. Pics/www.dufferin61-63.com

Bahl delineates a first-of-its-kind training institution that propelled several illustrious careers—admirals, chiefs of naval staff, nautical advisors, and merchant marines in India, Bangladesh, Sri Lanka and Malaysia.  The book is replete with examples of naval officers who showed exemplary courage in times of crisis. The cadets (and their families) credit the Dufferin for their rare sea sense and value education, which equipped seamen for life’s higher accomplishments.

Bahl’s identification with Dufferin is deep; it reflects in the chapters when Dufferin speaks in first person. He has also transformed some real-life incidents into conversations with batch-mates. “It is an attempt to re-create a record of life aboard the ship, by weaving everyday rhythms into a story ... and hopefully, into an evocative emotional and inspirational narrative. I trust that the memories which surface, move the reader...”

History of The Dufferin is a recap of the vessel’s known milestones—the construction in England in 1904, its naming after the Viceroy of India, the robust role as a troopship up to 1925 which includes the part played in Royal Navy, the conversion to a training ship (1927 to 1972) and the final rite of passage at Mumbai’s Darukhana ship breaking yard in 1976.  Dufferin’s trajectory is placed in the global context, especially the World Wars, British occupation of India, India’s Independence Movement, and the rise of the Indian Navy and shipping industry.  The momentous life of Dufferin runs parallel to India’s small wins like establishment of the first Mercantile Marine Committee (1923), construction of India’s first ship Jal Usha (1948) and enactment of the Merchant Shipping Act (1958), which for the first time provided for registration of what may be termed as Indian Ships.

Interestingly, Dufferin’s facilitation for training was not an easy process. It came after much persuasion of an unwilling foreign power.  Sir PS Sivaswamy Aiyer resolution in the Central Legislative Assembly (1922) demanded the formation of a mercantile marine committee to consider all aspects of promoting Indian shipping. It stated the need for “a nautical college in Indian waters”. Later, the Indian Mercantile Marine Committee recommended the establishment of a training school for deck and engine-room staff and the conversion of the Royal Indian Marine Troopship Dufferin for the purpose. While Dufferin was eventually allowed as a training platform, the British earlier alleged that “Indian youth had no aptitude for a seafaring career”; which is why the annual admission was restricted to only 30 boys. Bahl says: “Nothing could be farther from the truth and the charge was almost blasphemous. The authorities conveniently overlooked that as late as World War I, about 3,400 Indian seamen had laid down their lives to safeguard the freedom of the Empire.”  Seventy-seven boys appeared for the first Dufferin entrance exam, which only proved that Indians were sufficiently looking forward to a mentally-physically challenging profession, waiting for the British to quit and make place for the homegrown mercantile marine.

As Bahl references archaeological and historical texts, Dufferin becomes a tool to appreciate India’s maritime tradition dating back to circa 2500-1700 BCE. For instance, the Administrative History of India (1834 to 1947) honours Dufferin’s part in the blockade of the Makran Coast.  The blockade duty was an exceedingly hot and unpleasant one because officers were required to wear the number 10 uniform throughout the day, irrespective of the nature of the work or the temperature. At night, the mess kit was worn with stiff shirts for dinner. Another episode adds a new dimension to Dufferin’s resilience: The ship’s crew was very proficient in landing troops and mules on open beaches using lifeboats, which had the gear and thwart for the purpose. As a result of daily practice, Dufferin is known to have embarked 100 mules in speedy half-hour operations. “The mules were trained to jump off the boat and back into the boat at the beach,” Bahl’s book informs.

Dufferin’s Mumbai-connect forms a key chapter. The vessel was moored off the Mazgaon Pier, from where the cadets embarked/disembarked on the ship.  As the book rightly points out, the strategic pier lost its raison d’etre after Dufferin’s decommissioning. It deteriorated due to lack of use and maintenance.  Dufferin also had a strong connection with Prince of Wales Seaman’s Club (situated close to the docks) where many Dufferin cadets stayed during exams and sign-ons.

The Bombay Dock Explosion of April 1944 shook the Dufferin, physically too. The fateful day was a Friday and an exam was in progress. As the vessel vibrated, ink bottles turned over.  Some cadets, who weren’t confident of their performance, tried to spill ink onto the written sheets, so as to blank off their answers.  But teachers immediately identified the culprits.

Bahl also packs the book with light and serious exchanges which shows the texture of life at sea—cadets’ breakfast chatter, shore leave politics, clean-ship duties, swimming and signal test clearance, boxing spectacles, once-a-week disembark at Gateway of India, film screening nights on quarterdeck, ragging culture, and the court of honour unofficial trials. The world inside the ship evokes respect for regimen. Dufferin’s at-sea experience became a national resource, which not just gave the trainees “the feel of the ocean swells and wind velocities,” but also added to India’s maritime acumen. The author regrets that Dufferin could not be preserved as a maritime shore-based museum. As per the journal of The Company of Master Mariners of India, Dufferin’s conversion as a museum was financially unfeasible, due to which the precious property could not attain an afterlife.

Bahl says Dufferin inspired him to work tirelessly for an entire lifetime, as it reflects in his current assignments. He wrote this book during the 2020 lockdown. “For me, the pandemic demonstrated, without any doubt, that the merchant marine is an essential service and that the sailor remains its most essential element,
fulfilling the timeless equation between mankind and the sea,” says Bahl who credits the Dufferin for the energy he has at the ripe age of 71.

In 2016, Bahl survived a near-death experience; he was paralysed and only dimly hoped to somehow dictate the book to a writer.  But, to his own surprise, he regained his mobility and not just finished the book, but today also continues to wear many hats.  He is the President of the Maritime Mumbai Museum Society, the chairman of the Nautical Institute of India; he is on the advisory body of the Mumbai University’s Centre of Excellence in Maritime Studies, apart from being the director of the Centre for Climate and Societal Impacts Research. He is also president of the Dufferin ex-cadets’ association, and heads the umbrella body of ex-cadets of two other training ships—Rajendra and Chanakya. He has been active in many reunions of the ex-cadets.

Dufferin’s jubilee years have been marked by the presence of India’s Prime Ministers—Pandit Jawaharlal Nehru presided over the 1952 Silver Jubilee function; late Morarji Desai presided over the Golden Jubilee in 1977.

Bahl loves to plan much ahead. Currently, he is setting the pace and stage for the 100th anniversary of the Dufferin training ship in 2027.  He says: “I know that is five years from now; but time flies you know, just as it did onboard Dufferin!”

Next Story : Indian ships that sailed to Southeastern Seas