What ‘Marshal’ meant to Ravi Shastri 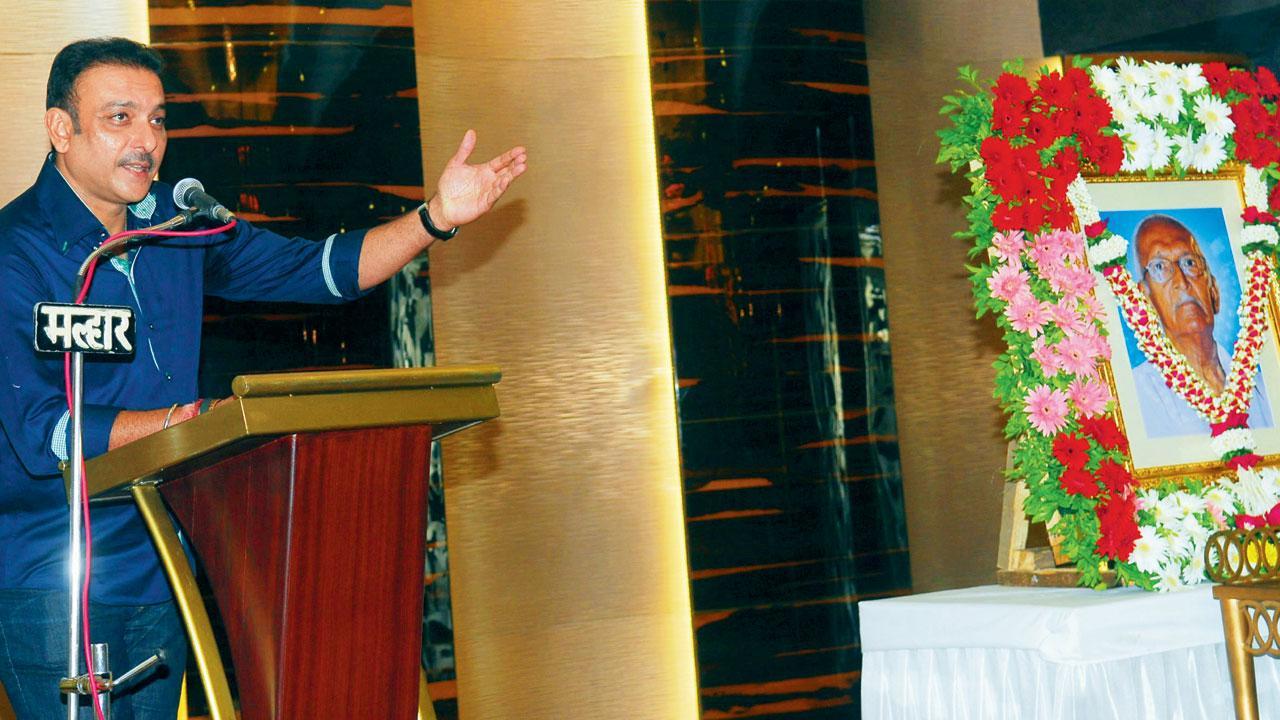 Ravi Shastri turns 60 tomorrow. While on one side, his family and friends are all set to raise their glasses to celebrate a milestone that is reached in a sterling manner, he on the other won’t forget to remember the people who have played a major role in his life’s journey.  Doubtless, he will be thinking about Vithal ‘Marshal’ Patil, who was more than just his Podar College coach.

Patil was an early mentor to Shastri. When he was dropped from the Mumbai U-22 side in the late 1970s, he urged him not be disheartened because the other people who mattered apart from the selectors, knew how well he had batted in the selection nets.

Shastri figured in the numerous conversations I had with Patil. He could never stop emphasising how disciplined and dedicated he was as a player. He once said, “Our college nets used to start at 7 am and end at half past nine. We had to stop our activity there and then because the groundsman would want to water the wicket at that time. But Ravi would always come to me and say, ‘Sir, some high catches please. Sir, some slip catches now.’ ”

Shishir Hattangadi, who was Shastri’s teammate at Podar, remembers visiting the late coach along with Shastri after University cricket tours. “He would know the basic performances but would discuss the deeper aspects of the matches and tours, who performed and who didn’t,” Hattangadi told me on Wednesday.

Anirudh Nansi, another Podar batsman, who went on to represent Maharashtra and India in water polo, recalled one March 1981 day when Shastri picked him up from Podar College and drove his Fiat car to Patil’s residence at Dadar East.

“Ravi spoke to Sir about his maiden Test tour to New Zealand and before we left, Sir told Ravi that whatever one achieves in life, they should never forget their roots and the people who have helped them reach where they are. Knowing Ravi all these years, I can safely say that he walked the talk with this advice,” Nansi told me.

Patil was a senior selector. His dedication to the game knew no boundaries. If at all there was a whiff of criticism, it would be about him taking more interest in players from Podar and Dadar Union Sporting Club. And while that may or may not be true, one can safely say he insisted on his boys keeping those performance charts glowing. Nansi provides an example. “I was at the Podar nets after having endured a poor run of scores in the 1980-81 Rohinton Baria Trophy tournament in Udaipur. I was preparing to represent Bombay University against Bombay Gymkhana in the Police Shield.

Our side was depleted because the bigger players were at the Vizzy Trophy. Sir pulled me aside and told me in no uncertain terms that I would be dropped from the Podar College team if I didn’t get runs in this game. I knew immediately that this was not an empty threat. I got 70 and helped Bombay University win. Had it not been for Sir’s words, my poor form would have continued.”

Back to Shastri. When his Audi car, rewarded to him for being Champion of Champions in the 1985 World Championship of Cricket in Australia, arrived in India, he drove it to Patil’s residence. He not only showed the car to his coach but also took him for a drive, a moment Patil described as “so memorable.”

A few days after Patil’s June 2014 death, Shastri recalled how his coach would ensure his batsmen faced the best of bowlers in the nets. “Suddenly you’d see some new bowlers at the nets - from Ruia College, Dadar Union, MB Union. How he would manage that, you’d never know, but he got the best bowlers to bowl at his batsmen,” said Shastri.

To say Patil was proud of all his Podar boys would be as obvious as saying he was a fine Kanga League bowler; no one took more wickets in Mumbai cricket’s most celebrated league than Patil’s 759. That pride rubbed off on his wards. Patil told me in an interview how Shastri tried calling him from the West Indies in 1989 while he was at Podar’s net practice and only got through on the fourth attempt to share the joy of fellow Podarite Sanjay Manjrekar scoring a hundred in the Barbados Test. By the way, Shastri takes great pride his very own Test centuries in the Caribbean at Antigua in 1983 and Barbados in the same Test as Manjrekar.

Alex Fernandes, who has been a close friend of Shastri’s for a number of years now, remembered “terrific coach” Patil for spelling out often why he felt his student should have been one of the youngest permanent India captains and that mere one-Test opportunity against the West Indies at Chennai in 1988 didn’t do justice to his captaincy and leadership skills.

However, Shastri is never known to brood. He went on to scale higher heights post-1988 with the bat and rocked an India head coach stint like no other. And who is to say that Vithal ‘Marshal’ Patil wasn’t part of the recipe.

Next Story : The field good factor!