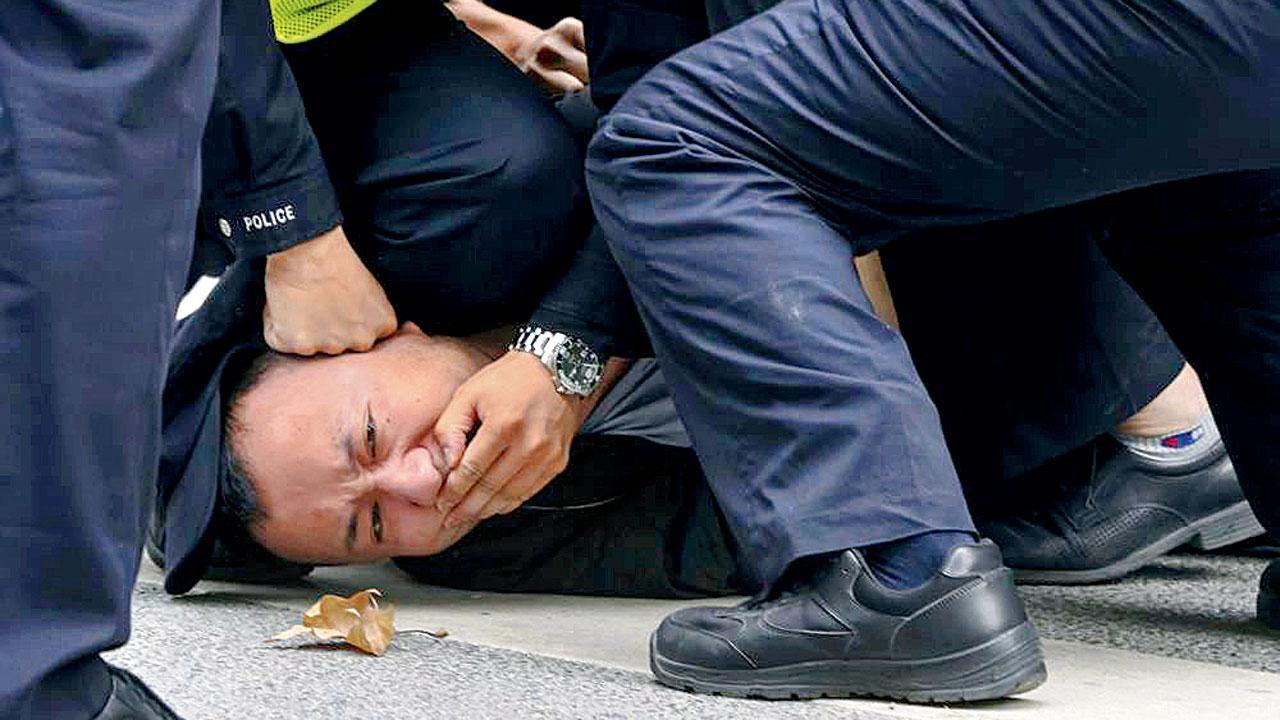 Policemen pin down and arrest a protester during a protest on a street in Shanghai, China Sunday. Pic/AP


Chinese authorities have begun inquiries into some of the people who gathered at weekend protests against Covid-19 curbs, people who were at the Beijing demonstrations said, as police remained out in numbers on the city’s streets. Two protesters told Reuters that callers identifying themselves as Beijing police officers asked them to report to a police station on Tuesday with written accounts of their activities on Sunday night. A student also said they were asked by their college if they had been in an area where a protest happened and to provide a written account.

“We are all desperately deleting our chat history,” said another person who witnessed the Beijing protest and declined to be identified. The person said police asked how they heard about the protest and what was their motive for going. It was not clear how authorities identified the people they wanted to question about their participation in the protests, and it was also not clear how many such people the authorities aimed to question.

Chinese universities are sending students home as the ruling Communist Party tightens anti-virus controls and tries to prevent more protests. Tsinghua University, President Xi’s Jinping’s alma mater, where students protested Sunday, and other schools in Beijing and the southern province of Guangdong said they were protecting students from Covid-19. But dispersing them to far-flung hometowns also reduces the likelihood of more activism following protests at campuses last weekend. The move to disperse students was unusual at a time when many cities are telling the public to avoid travel and imposing controls on movement.

China on Tuesday said it will take steps to “minimise” the impact of its draconian coronavirus lockdowns, amidst the unprecedented public protests against President Jinping’s stringent zero-Covid policy that evoked strong support from the UN, the US and other nations.

Australia’s largest state will withdraw or refund tens of thousands of fines issued during the Covid pandemic after government lawyers conceded on Tuesday that some fines were invalid in a test case brought by a legal advocacy group. Australian states and territories instituted strict restrictions during the pandemic, including limits on travel and movement outside the home. Police in New South Wales, the largest state, could issue fines of A$1,000 ($670.60) to individuals who breached public health orders. Redfern Legal Centre, a free legal service, launched a test case in July on behalf of three plaintiffs arguing their fines of between A$1,000 to A$3,000, were invalid because the penalty notices did not sufficiently describe the offence. Government lawyers conceded the plaintiff’s fines did not meet legal requirements in a hearing at the New South Wales Supreme Court on Tuesday. Shortly after, the Commissioner of Fines Administration withdrew 33,121 fines, just under half the 62,138 Covid-related fines issued. The remaining fines are unaffected by the decision. All sanctions, including driver license restrictions will be stopped. Those who have already paid will be refunded.

China’s ambassador in the United Kingdom has been summoned by the British government over reports by the BBC which said Chinese police had assaulted one of its journalists covering a protest in Shanghai, the Evening Standard said on Tuesday.