Security tightened after rare COVID protests across China; backlash a setback for the country’s efforts to eradicate the virus 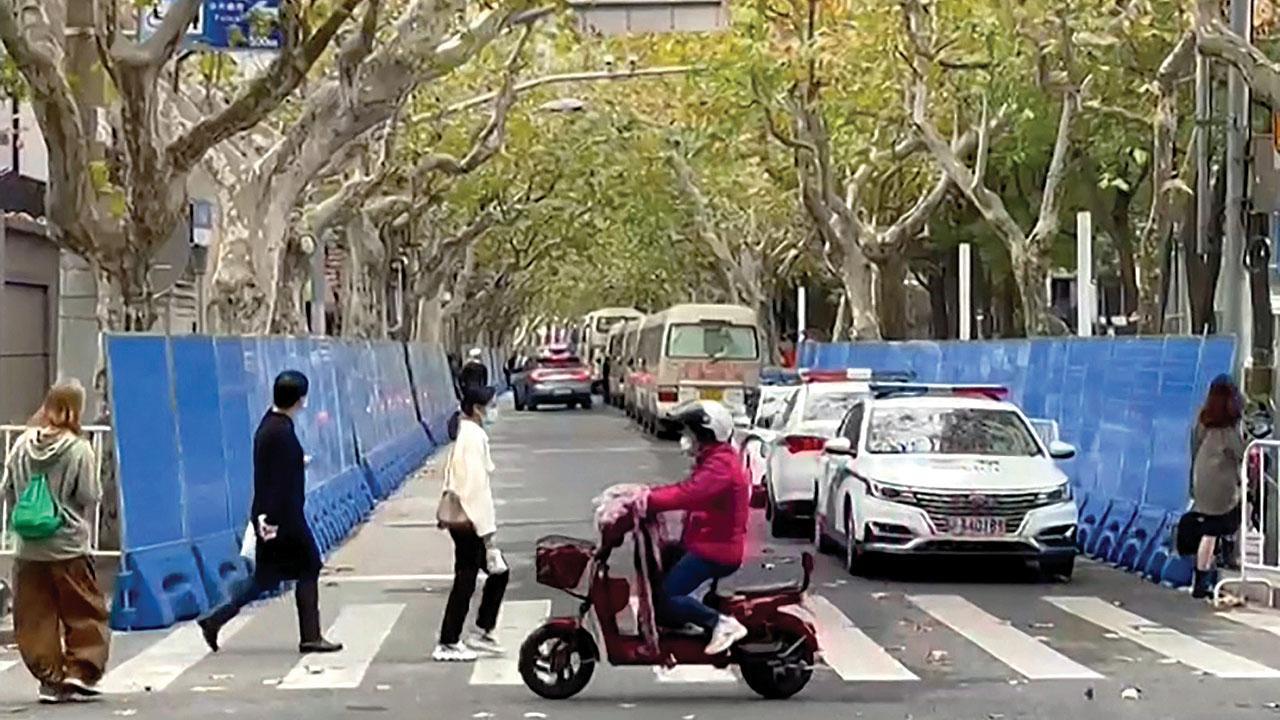 People walk past barricades and police on Wulumuqi street, named for Urumqi in Mandarin, in Shanghai on Monday, a day after protests following a deadly fire in Urumqi, the capital of Xinjiang region. Pic/AFP


Police on Monday patrolled the scenes of weekend protests in Shanghai and Beijing after crowds there and in other cities across China demonstrated against stringent Covid-19 measures disrupting lives three years into the pandemic.

From the streets of Shanghai and Beijing to dozens of university campuses, protesters made a show of civil disobedience unprecedented since leader Xi Jinping assumed power a decade ago, overseeing the quashing of dissent and setting up an extensive high-tech social surveillance system. “We hope to end the lockdown,” said 28-year-old Shi at a candlelight vigil in Beijing late on Sunday. “We want to live a normal life. We should all bravely express our feelings.”

“What we object to is these restrictions on people’s rights in the name of virus prevention, and the restrictions on individual freedom and people’s livelihoods,” said Jason Sun, a college student in Shanghai. There was no sign of new protests on Monday in Beijing or Shanghai but dozens of police were in the areas where the weekend demonstrations took place.

The backlash against Covid restrictions is a setback for China’s efforts to eradicate the virus, which is infecting record numbers of people three years after it emerged in the central city of Wuhan. The zero-Covid policy has kept China’s official death toll in the thousands, compared with more than a million in the United States, but it has come at the cost of confining many millions to long spells at home and extensive disruption and damage to the world’s second-largest economy. Abandoning it would mean rolling back on a policy championed by Xi. It would also risk overwhelming the health system and lead to widespread illness and deaths in a country with hundreds of millions of elderly and low levels of immunity to Covid, experts say.

The BBC said police assaulted and detained one of its journalists covering the events before releasing him after several hours. China disputed the account and said the journalist had not identified himself as a reporter. A Reuters journalist was also detained for about 90 minutes on Sunday night, before being released.