The schools were burnt down late Friday by unidentified assailants in coordinated attacks in Pakistan's Gilgit-Baltistan, triggering protest by local residents who sought safety for educational institutions 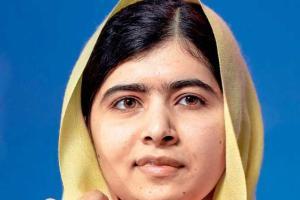 
Youngest ever Nobel Laureate and education activist Malala Yousafzai has strongly condemned the burning down of 12 schools, half of them all-girls', in Pakistan, saying the "extremists" have shown that a "girl with a book" frightens them the most.

The schools were burnt down late Friday by unidentified assailants in coordinated attacks in Pakistan's Gilgit-Baltistan, triggering protest by local residents who sought safety for educational institutions.

Police are yet to arrest anyone linked to the attacks claimed by no group so far. "The extremists have shown what frightens them most - a girl with a book," Malala, 21, said in a tweet. She also called for the rebuilding of the damaged schools in Chilas town, about 130-kilometre from Gilgit.

"We must rebuild these schools immediately, get the students back into their classrooms and show the world that every girl and boy has the right to learn," Malala tweeted. Imran Khan, who is set to become Pakistan's new Prime Minister, also condemned the attack, terming it an "unacceptable" act.

"Shocking & condemnable torching of schools in GB, more than half of them girls' schools. This is unacceptable and we will ensure security for schools as we are committed to focusing on education, especially girls' education which is integral to Naya Pakistan," Khan said in a tweet.

Malala, who won the Nobel Peace Prize in 2014, was shot by the Taliban in 2012 for promoting girls' education in the Swat Valley in Khyber Pakhtunkhwa. Girls' schools are often attacked in the northern areas of Pakistan. In December 2011, at least two girls' schools were partially damaged in low-intensity explosions in Chilas.

Earlier that year, unidentified assailants had also blown up two girls' schools. In 2004, girls' schools in Chilas came under a string of attacks. Nine schools of which eight were girls' schools were attacked and destroyed in five days in the area in February. Terrorists have also blown up educational institutions in Khyber Pakhtunkhwa and Federally Administered Tribal Areas (FATA).

According to a report, about 1,500 schools have been destroyed in the tribal belt during the last 10 years. In 2017, the Human Rights Watch (HRW) in its report stated that attacks by the Taliban and other militant groups disrupted the education of hundreds of thousands of children, particularly girls, in Pakistan.

Also Read: Malala Yousafzai Makes Emotional Visit To Hometown Where She Was Shot