At the same time, Guterres "urgently" appealed to the governments of both India and Pakistan to exercise maximum restraint to ensure the situation does not further deteriorate 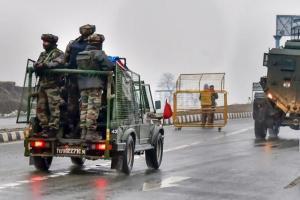 In a strong show of international solidarity and support for India, the powerful UN Security Council comprising 15 nations, including China, on Thursday condemned in the "strongest terms" the "heinous and cowardly" terror attack perpetrated by Pakistan-based Jaish-e-Mohammed in Pulwama and stressed on the need to hold organisers and financiers of such "reprehensible acts" accountable and bring them to justice. Significantly, the press statement, issued by the most powerful UN body, names the Pakistan-based terror group headed by Masood Azhar.

The UNSC, which includes China as a veto-wielding permanent member that in the past has blocked India's bids in the Security Council Sanctions committee to designate Azhar as a global terrorist, also called on the global community to "cooperate actively" with the Indian government in holding the organisers and sponsors of such attacks accountable.

"The members of the Security Council condemned in the strongest terms the heinous and cowardly suicide bombing in Jammu and Kashmir, which resulted in over 40 Indian paramilitary forces dead and dozens wounded on February 14, 2019, for which Jaish-e-Mohammed has claimed responsibility," the UNSC press statement on the 'Suicide Bombing in Jammu and Kashmir' said. "The members of the Security Council underlined the need to hold perpetrators, organisers, financiers and sponsors of these reprehensible acts of terrorism accountable and bring them to justice, and urged all States, in accordance with their obligations under international law and relevant Security Council resolutions, to cooperate actively with the Government of India and all other relevant authorities in this regard," it said.

The UNSC members expressed their deepest sympathy and condolences to the families of the victims, as well as to the Indian people and the government, and wished a speedy and full recovery to those who were injured. "The members of the Security Council reaffirmed that terrorism in all its forms and manifestations constitutes one of the most serious threats to international peace and security," the statement said. The members also reiterated that any "acts of terrorism are criminal and unjustifiable, regardless of their motivation, wherever, whenever and by whomsoever committed".

The condemnation by the UNSC comes just a day after Pakistan's Permanent Representative to the UN Maleeha Lodhi met top UN leaders, including with Secretary-General Antonio Guterres and the Security Council President Anatolio Ndong Mba, briefing them about the escalating tensions in the region in the wake of the Pulwama attack. In a major boost to India's efforts to get Azhar on the list of global terrorists, France is expected to soon move a proposal at the UN to ban the head of the UN-proscribed group. The proposal, when moved, will be fourth such bid at the UN in past 10 years. In 2009 and 2016, India moved the UN's Sanctions Committee to ban Azhar, also the mastermind of attack on the air base in Pathankot in January 2016. India was joined by the P3 nations -- the US, the UK and France -- in the 2016 proposal.

In 2017 also, these P3 countries moved a similar proposal at the UN. However, China, using its veto power, has always blocked the proposal from being adopted by the UN. Guterres too had strongly condemned the terror attack, in which 40 CRPF personnel were killed when a suicide bomber drove his explosives-laden vehicle into a CRPF bus, and called for those behind the attack to be brought to justice. On Wednesday, Guterres again reiterated his strong condemnation of the Pulwama attack, stressing that it is essential there be accountability under international law and perpetrators of terrorist acts be brought swiftly to justice.

"The Secretary-General has been following with great concern the situation in South Asia. He reiterates his strong condemnation of the terrorist attack against Indian security forces in Pulwama" in JK and the subsequent violence, a statement issued by his spokesperson Stephane Dujarric had said. He said it is "essential that there be accountability under international law and the perpetrators of terrorist acts be brought swiftly to justice". At the same time, Guterres "urgently" appealed to the governments of both India and Pakistan to exercise maximum restraint to ensure the situation does not further deteriorate.