In the video, MS Dhoni is seen along with his colleagues Parthiv Patel and Piyush Chawla singing along in a toilet 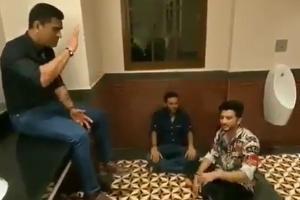 
MS Dhoni is not part of the Indian cricket team and seems to be making the most of his free time. The former India captain is currently all over social media after a video of him went viral on Instagram.

In the video, MS Dhoni is seen along with his colleagues Parthiv Patel and Piyush Chawla singing along in a toilet. MS Dhoni happily croons to the song 'Mere Mehboob Qayamat Hogi' -a Kishore Kumar song from the film Mr X in Bombay. While Parthiv Patel is seated on the floor as MS Dhoni sings along, Piyush Chawla is later seen joining them in the video. Watch the entire viral video below.

38-year-old MS Dhoni was last seen in a cricket match during the ICC 2019 World Cup semifinal. He did not play a match at the following series vs Bangladesh, South Africa and New Zealand.

The BCCI has also stated that they are ready to move on from MS Dhoni and look for fresh talent to replace him. The board has also dropped MS Dhoni from the central contracts list.

Meanwhile, MS Dhoni is making the most of his free time and living it up with his wife Sakshi, daughter Ziva and his buddies.

Next Story : IND vs NZ: We have the belief to win in New Zealand, says Virat Kohli