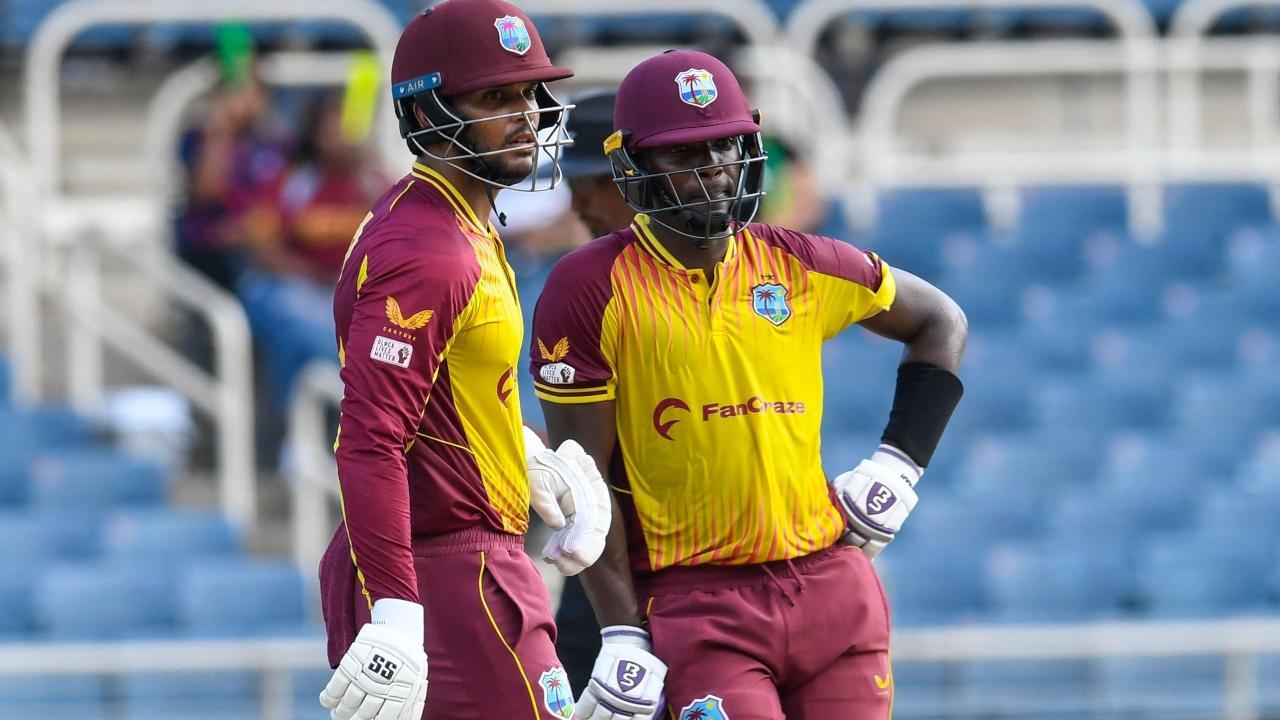 Brandon King and Sharmarh Brooks put on a 100 run partnership during the third T20i between West Indies and New Zealand. Pic AFP


Half-centuries from West Indies openers Brandon King and Shamarh Brooks helped the hosts defeat New Zealand by eight wickets and avoid a series sweep by the visitors in the third and final T20 International at Sabina Park on Monday (IST).

King slammed 53 and his opening partner Brooks hit an unbeaten 56 as West Indies overhauled New Zealand's score of 145/7 for the loss of just two wickets with an over to spare and earn a consolation win going into the ODI series beginning on August 17.

The Kiwi top-order all reached double figures during their respective innings, but only one batter scored more than 24 as the hosts' bowlers put the clamps on the visitors.

Glenn Phillips looked the best of the New Zealand batters, with the No.5 smashing 41 from just 26 deliveries to help the visitors post a below-par score of 145/7 from their allotted 20 overs.

After scores of 185/5 in the first match of the series and 215/5 in the second, Kane Williamson's side would have been disappointed with their efforts after they won the toss and elected to bat first.

While New Zealand opener Martin Guptill only managed 15 before he was bowled by Akeal Hosein, the veteran did enough to become the leading run-scorer in the history of men's T20I. Guptill has now made a total of 3,497 T20I runs during his career, with his latest knock helping him overtake India captain Rohit Sharma (3,487) narrowly, according to ICC.

Rohit and third-placed Virat Kohli (3,308) will get the chance to move to the top when India take part in the Asia Cup that commences later this month in the UAE.

West Indies made four changes to their XI and the decision to rest skipper Nicholas Pooran paid off as the hosts' top-order looked composed in chasing down New Zealand's score with ease.

Right-hander Brandon King (53) got the hosts off to a flyer on his return from injury, while fellow opener Shamarh Brooks (56 not out) played a more cautious role as the hosts put on 102 for the opening wicket to leave New Zealand requiring a miracle.

Rovman Powell (27 not out) then came in to guide the run chase home, with the stand-in West Indies captain smashing Jimmy Neesham for six on the final delivery of the penultimate over to seal the contest.

The decision by the West Indies to play two spinners proved pivotal in the result, with Hosein (2/18) and Hayden Walsh (1/16) proving difficult to dispatch and pacer Odean Smith (3/29) reaping the rewards with career best figures.

King, who won the 'Player of the Match' award for his impressive half-century, said the bowlers deserved much of the praise for the victory.

"Today credit has to be given to the bowlers," he said after the match. "They did an excellent job for us and made my job that much easier."

Williamson said his side was outplayed on the day, with New Zealand now turning their attention to the three-match ODI series that commences on Wednesday.

"The West Indies adapted to the conditions nicely," Williamson said. "We knew that with 140 things would have to go well for us with the ball and they outplayed us today."