Arshdeep had to part with a couple of his jerseys, which saw Suryakumar Yadav wearing the left-arm pacer's shirt when he came out to bat. Later pacer Avesh Singh too came out wearing the jersey bearing Arshdeep's name 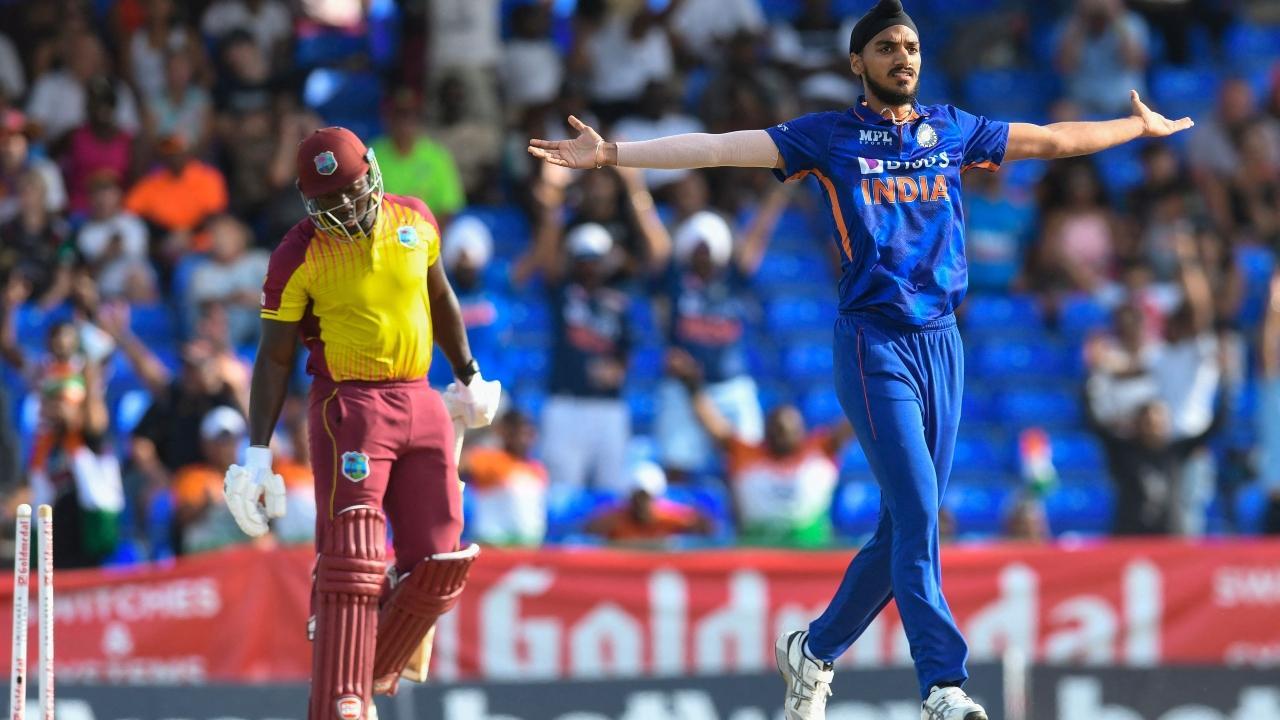 Arshdeep Singh celebrates the dismissal of Rovman Powell during the second T20I match between West Indies and India. Pic/ AFP


There were more than one Arshdeep Singhs doing duty for India in the second T20 International against the West Indies here on Monday!

Apparently the lanky India pace bowler landed in St. Kitts from Trinidad with more than a handful of his jerseys, even as the luggage of several other teammates got delayed.

Arshdeep had to part with a couple of his jerseys, which saw Suryakumar Yadav wearing the left-arm pacer's shirt when he came out to bat. Later pacer Avesh Singh too came out wearing the jersey bearing Arshdeep's name.

The delays in arrival of luggage also forced the match to start three hours late. The match, which was scheduled for an 8:00pm start (IST) finally commenced at 11:00 pm.

"As a result, today's (Monday's) 2nd T20 Cup match is due to start at 11 p.m. India time. CWI regrets any inconvenience caused to our valued fans, sponsors, broadcast partners and all other stakeholders," CWI said.

Viewers watching the game in India were taken aback when 'Arshdeep' came out to open with Rohit Sharma. But the fans soon realised it was Suryakumar Yadav wearing the 24-year-old pacer's jersey. Later, Avesh Khan too was seen wearing the extra jersey of the left-arm quick.

Social media went into overdrive, with a fan tweeting, "Today, 3 players wore jersey of a guy named Arshdeep. But the real lad @arshdeepsinghh performed best of all of them."

Another fan wrote, "Avesh khan wearing arshdeep jersey and take wicket by bowl yorker like arshdeep." Another fan posted an image of Spiderman and two imposters, and wrote, "Everyone is wearing an Arshdeep shirt on the field today."

West Indies went on to win the match by five wickets to level the series 1-1 after their left-arm pace bowler Obed McCoy produced one of the most impactful bowling performances in T20I cricket history as he demolished the visitors for 138.

The 25-year-old quick produced the best-ever figures by a West Indies bowler in the shortest format before the home side held its nerve in the final over to level the five-match series. McCoy ended with 6/17 from a brilliant four-over spell which was a mix of accurate cutters and changes of pace.