ENG vs IND: India on the edge at Edgbaston 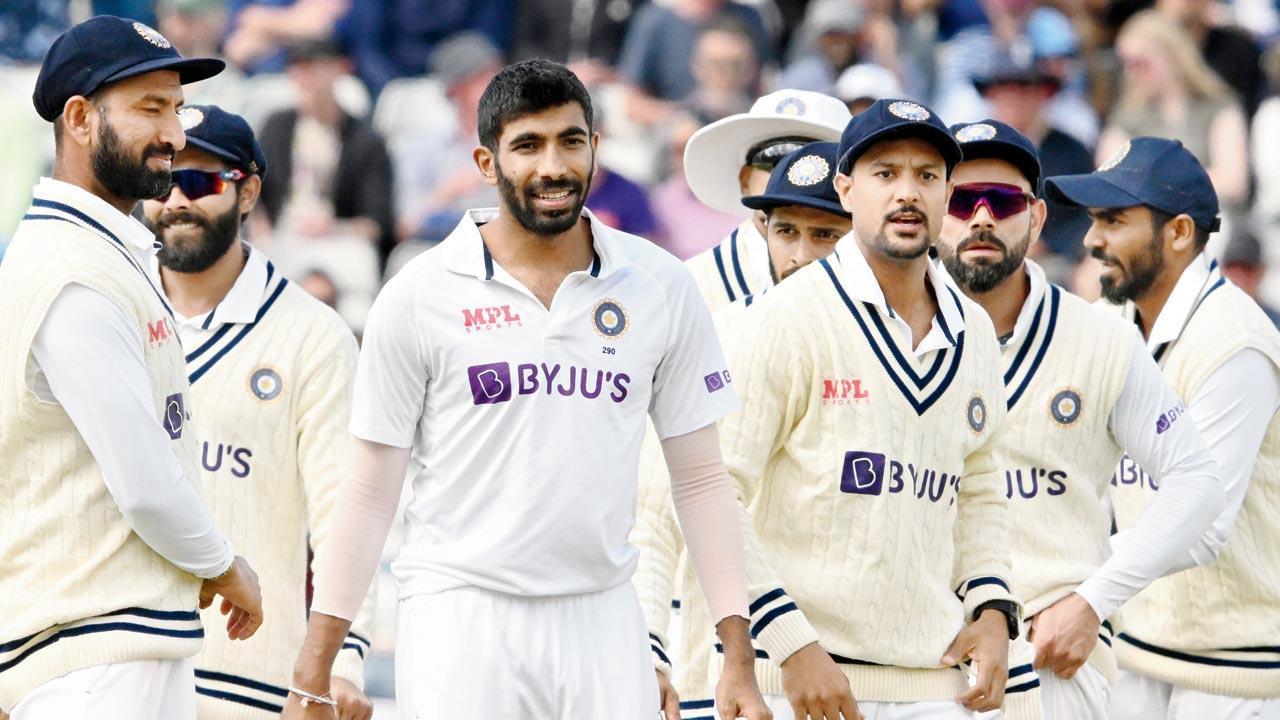 India skipper Jaspirt Bumrah along with teammates during Day Four of the fifth Test at Edgbaston yesterday. Pic/Bipin Patel


When England had won the toss and asked India to bat, there were two reasons—one, it was overcast and they wanted to put the Indian batsmen under early pressure.

Two, their belief that whatever target India would set them, they had it in them to chase it down. That’s why most experts felt that the target ought to be in excess of 400 for India to have a psychological edge. And that is what everybody thought India would be able to achieve easily after being 125 for three at the close of the third day.

But on the fourth morning, with hardly any cloud cover and the pitch playing at its best, India managed to add just 120 runs more, leaving the home team a target of 378 to level the five-match Pataudi Trophy series.

It seemed England were on the right path when their opening pair of Alex Lees and Zak Crawley put on a century partnership to get the chase going in right earnest. The Indian bowlers were running out of ideas as the batsmen were hardly tested.

It was at that point skipper Jasprit Bumrah took it upon himself to do something about it. Bowling from the pavilion end, he castled a well-set Crawley to give India a new hope. And with the first delivery after the tea break, he had Ollie Pope caught behind to rattle the home team.

And as luck would have it, soon Lees, who was batting so well, was run out in a mix-up with Root. So, in a matter of two runs, from 107 for none, England had fallen to 109 for three. And the pressure was back on the home team with their top two batsmen Root and Jonny Bairstow at the crease. Much of the fate of this keenly fought contest rests on how long and how well the two can bat, in order to complete another wonderful chase in this series-deciding game at Edgbaston.

India in their eagerness to effect another breakthrough, wasted two reviews, when it was blatant that the ball had pitched outside the leg stump on one occasion and the height was a question on the other. The poor judgment of bowlers Ravindra Jadeja and Mohammed Shami, forcing stand-in skipper Pant to review the decisions when skipper Burmrah had gone out for a couple of overs, means that with so much cricket yet to be played, India have just one review in hand.

The way the England batsmen are approaching the chase, being 217 for three with 161 more to get, there is no doubt that it will go down to the wire. Either way, we should have a result around noon on the final day. At the time of going to press, Bairstow (43) and Root (64) were batting very confidently. It will require a lot of effort from here on for India to pick up the remaining seven wickets as the pitch is playing at its best and the sun is shining brightly.

In the morning, much was expected from the overnight pair of Cheteshwar Pujara and Rishabh Pant to help India build a huge lead, but the England team had their plan well laid out and the bowlers bowled with a lot of purpose. They did not allow many freebies, as they had done in the first innings. Pujara is known for their dour game, but they dried up Pant’s scoring opportunities.

That’s the reason, India lost their wickets to loose strokes, rather than brilliant deliveries. Pujara cut one into the hands of Zak Crawley at point, Shreyas Iyer’s innocuous pull landed in mid-wicket’s hands, while Pant in trying to play a reverse sweep off Leach, gave a simple catch to Joe Root in the slip.  Pant did make another half-century (57) to add to his superlative 146 in the first essay, but when he departed, India were left only with the tailenders to prop up the total. But not many could be added as Stokes and Matthew Potts bowled to a plan to clean up the tail.