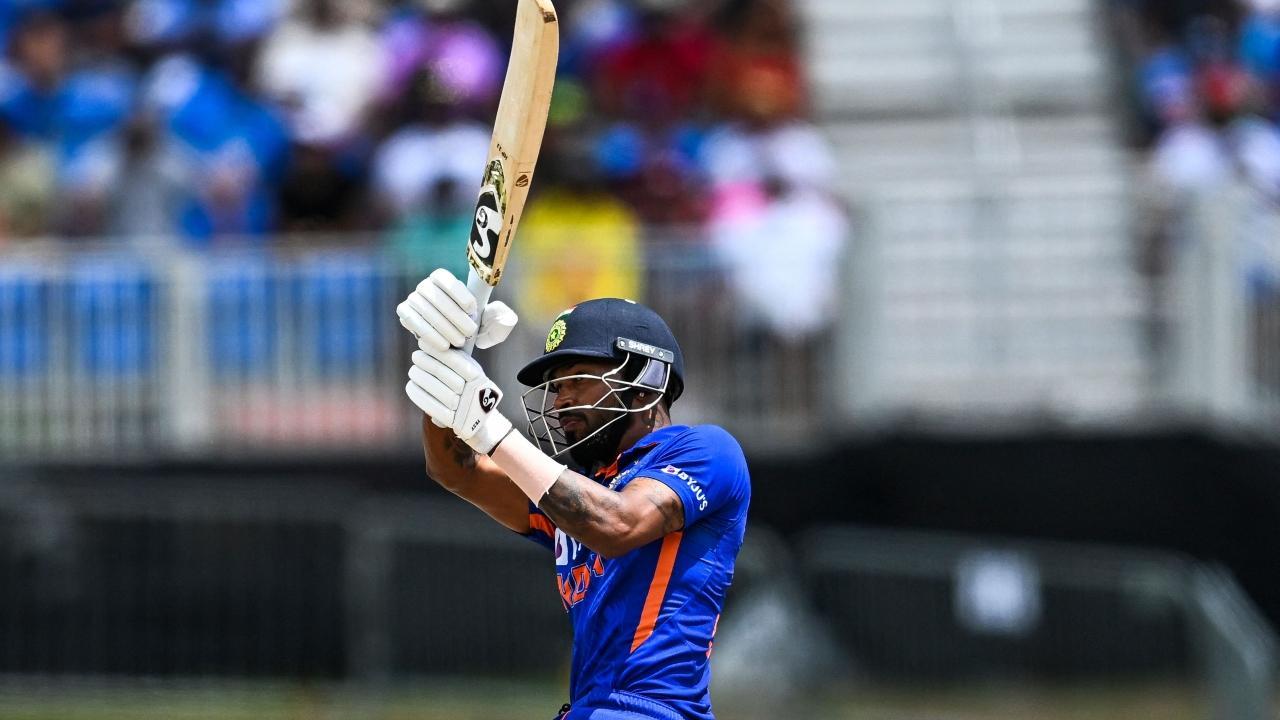 Hardik Pandya, of India, takes a shot during the fifth and final T20I match between West Indies and India. Pic/ AFP


After captaining India to a mammoth 88-run victory over West Indies in the fifth and final T20I, all-rounder Hardik Pandya stated that he is open to a full-time leadership role in the national side in future.

Pandya had captained Gujarat Titans to IPL 2022 title in their maiden appearance in the league and also led India to 2-0 T20I series win over Ireland in June.

"Yeah! why not? If I get an opportunity in the future, I'll be more than happy to do that, but right now we have the World Cup, and we have the Asia Cup (starting from August 27). We're going to focus on that and make sure as a team what we're doing, we continue (with that) and make sure that all the skillsets, which we are learning we can keep getting better at it, and at the same point of time enjoy the game as well."

"Very special to get a chance to lead your country. And getting that chance and getting that victory means a lot to me as captain and an individual. I was just following our captain's roles," said Pandya after the match.

Despite regulars like skipper Rohit Sharma, wicketkeeper Rishabh Pant, pacer Bhuvneshwar Kumar and batter Suryakumar Yadav being rested from Sunday's match, India still made 188 and bowled out West Indies for just 100. Pandya felt that players expressing themselves and team management giving them freedom is working wonders for India.

"I think the kind of talent that all the players have and the kind of freedom we're getting now. This is the new India with the way they're playing. I can see a lot of people playing with freedom, I can see a lot of people expressing themselves and not worrying about the result, which makes us more dangerous as a group. When you don't have anything to lose, you kind of go out there and do something special."

"The credit goes to the management and the guys and the whole group to kind of make sure we create the environment where the players go and kind of enjoy and make sure they're just giving their best - without being worried about whether they're going to get picked or dropped. That adds more value and makes us more dangerous."

"I wanted to make sure I gave Axar the new ball, and I wanted him to kind of get the confidence back and bowl some tight overs. At the same point in time, I know the kind of bowler he is. When he bowls a couple of tight overs, he creates chances, and the wristspinners have some weapons where the batters kind of find them difficult to pick."

"So, it was not pre-planned, but obviously, the wicket and the batters showed us that spin is going to be a big factor. They kept taking wickets, I didn't have to do much; I just had to hand over the ball and let them enjoy," stated Pandya.

Pandya signed off by saying that India are ready for their upcoming assignments, including Asia Cup and T20 World Cup. "It's just about how we can keep getting better. I think preparation-wise or the environment-wise, we are 100% ready, but in this sport, I feel you don't stop learning."

"So for us, yes, we are ready, but at the same time if we make sure we keep learning and make sure whenever the opportunity comes, we rise to the occasion and enjoy as many games we can win for the country."