Thumping 10-wicket victory in first ODI notwithstanding, hero of The Oval match Jasprit Bumrah gets philosophical as India look to seal series against England at Lord’s today 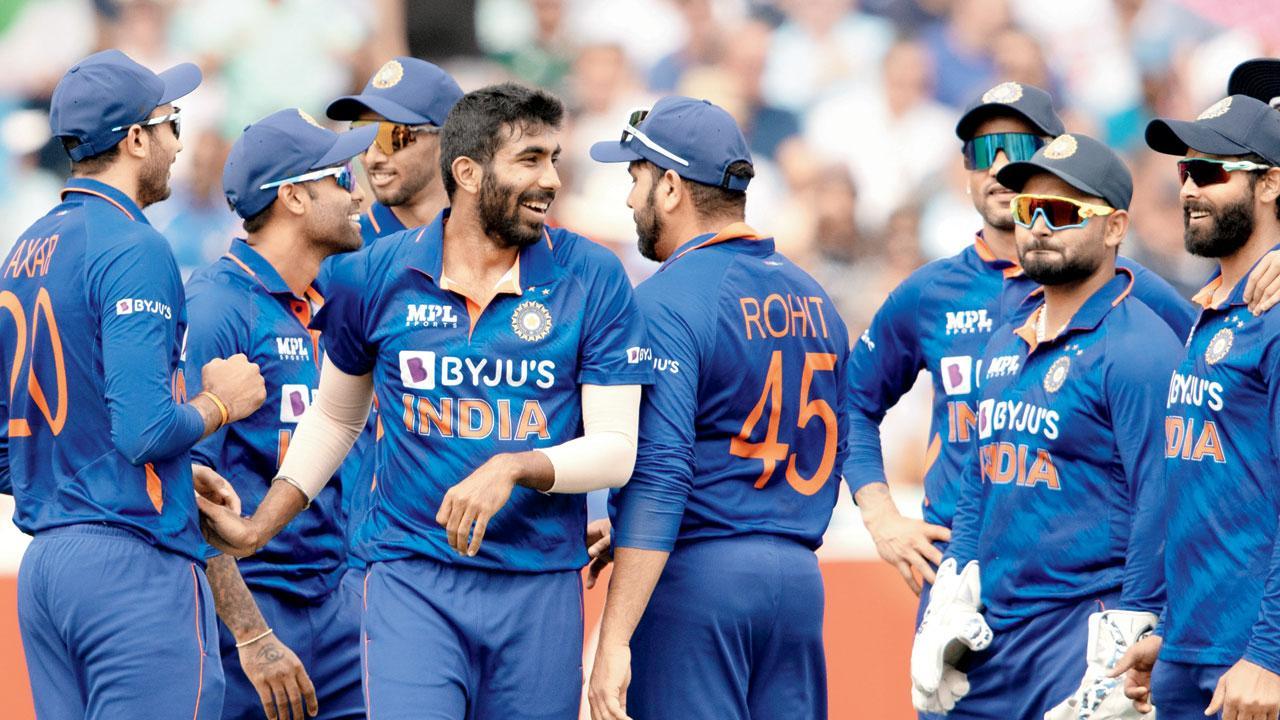 Jasprit Bumrah (centre) celebrates an England wicket with his India teammates in the first ODI at The Oval on Tuesday. Pic/Bipin Patel


The second ODI at Lord’s today will be an opportunity for the rival teams to commemorate their respective historic wins at the Mecca of cricket. It is exactly two decades and a day since India had registered their famous NatWest Series win on July 13, 2002, while England on this day in 2019, had won their maiden ICC World Cup after a pulsating final against New Zealand. So, besides the three-match ODI series being on the line here, it’s also an opportunity to recall memorable wins.

After India outplayed England in the first ODI at The Oval on Tuesday, the question on everyone’s lips is if they can do an encore and wrap up the series here.  The players, however, realise that not every day is a Sunday, or for that matter, a Tuesday. Just last week, on Tuesday, the Indian bowlers had failed to defend 378 in the fifth and final Test at Edgbaston. And a week later, the pace attack led by Jasprit Bumrah flattened the much-reputed English batting line-up en route a 10-wicket win for a 1-0 lead in the series.

Take nothing for granted

Bumrah, who was the star performer with a career-best haul (6-19) at The Oval, after having struggled on the final day of the Edgbaston Test, realises that a team cannot take success for granted every time they step on the field. “We ought not to get carried away by our success at The Oval. One day you will see everything is going in your favour. On another day, you can try whatever you want, but it doesn’t work for you. That is exactly why you need to keep a stable head,” Bumrah said after the thumping win in the first ODI on Tuesday.

“Every day is a new day. There will be days when you will get the edge first ball, there will be days you will bowl similarly all day, but won’t get a single edge. You don’t want to get desperate in these scenarios. That is why I rate stability a lot because, at the end of the day, there is very little in your hand.

“Once a bowler has let the ball go, there is nothing in his control,” added Bumrah who picked up the best-ever figures by an Indian in an ODI outside the sub-continent.  After the drubbing at The Oval on Tuesday, one expects the English team, whose new mantra is to go on an all-out attack, to come hard at the visitors.

England’s top-order had perished in a matter of a few overs, so it’s the responsibility of the batsmen to see that the home team bats judiciously rather than be carried away by mindless aggression. In a one-dayer there is enough scope to give a few overs to the rival bowlers to get your eye in and then go on the offensive. Hopefully, the English batsmen would have learned their lessons from the disaster at The Oval.

India, on their part, would be quite happy with the performance of their pace bowlers and opening batsmen. However, concerns remain with its untested middle-order. In the absence of the injured Virat Kohli, India would want Shreyas Iyer and Suryakumar Yadav to be tested in the middle-order.

India do bat deep with Ravindra Jadeja slotted at No.7, but the batting line-up needs to be tested in tough, pressure-situations for the team management and the selectors to zero in on players who can be part of the team for the T20 World Cup later this year in Australia. However, the immediate focus of skipper Rohit Sharma is to win this game at Lord’s and  seal the ODI series, having already clinched the three-match T20I series last week.

Bumrah back to No.1 rank in ODIs

Fast bowler Jasprit Bumrah has regained the top spot in the ICC men’s ODI Player Rankings after fashioning India’s 10-wicket win over England with a career-best haul of six for 19 in the first game at The Oval. Bumrah had lost the top spot to New Zealand’s Trent Boult in February 2020 after being No. 1 for most of the preceding two years.