Mumbai knocked out by UP in Vijay Hazare Trophy 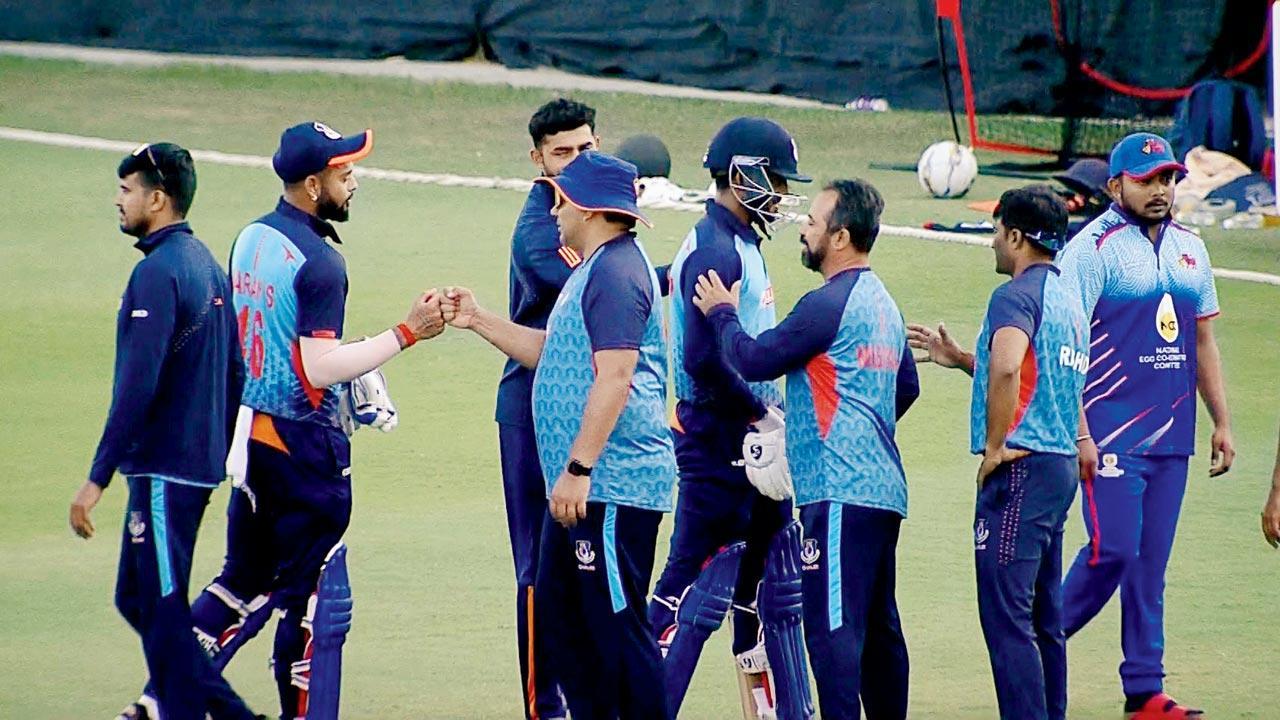 The Mumbai team congratulate UP for their win on Saturday. Pic/BCCI


Mumbai were knocked out of the 50-over Vijay Hazare Trophy by Uttar Pradesh (UP) in the pre-quarterfinals at Ahmedabad on Saturday. UP won by eight wickets. Put into bat, Mumbai were bundled out for a mere 220 in 48.3 overs, succumbing to UP pacer Shivam Mavi’s disciplined bowling that helped him return figures of 4-41.

UP win with 26 balls to spare

The chase for UP was a cakewalk as they won with 26 balls to spare. The same team had lost the Ranji Trophy semi-final to Mumbai in Bangalore last June. UP openers Aryan Juyal (82) and Madhav Kaushik (46) enjoyed a solid 119-run opening stand before captain Karan Sharma and Priyam Garg stayed unbeaten on 42 and 39 respectively.

Disappointed duo Mulani and Tamore reckoned the toss played a crucial role in the team’s defeat. “We batted in different conditions. Had we scored 250-plus, we would have had a chance to fight,” Mulani told Sunday mid-day.

Tamore, who scored 115 against UP in the 2021-22 Ranji Trophy semis, continued his form in the 50-over format. “I personally feel when the match starts at 9 am, most of the time it will be an added advantage for the team who win the toss and bowl first,” said Tamore.

‘Planned to get Shaw’

Undoubtedly, Mavi was the hero of the day. One of the four batsmen he dismissed was his 2018 U-19 World Cup-winning captain Prithvi Shaw—for 10. “It was an important game. We were playing against a big team like Mumbai in the knockout stage. We were expecting Mumbai to score 255-260 on a red-soiled flat wicket. But we bowled in good areas and the plan was to get him [Shaw] out early. I bowled Prithvi an outswinger and followed it up with an in-swinging delivery, off which he got clean bowled,” said Mavi.

They are with the India A team in Bangladesh.